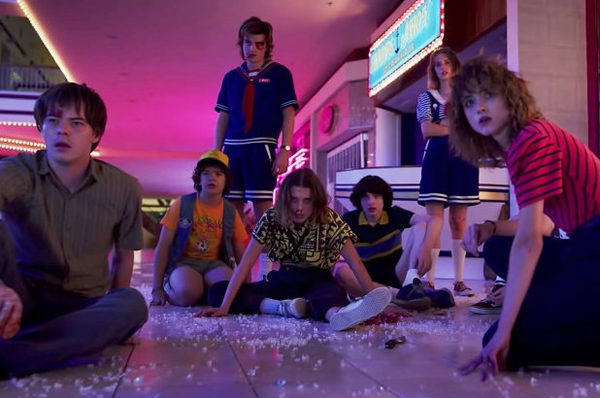 So, with Hopper possibly gone and the Byers moving, Stranger Things third season leaves a lot of unanswered questions as to how and where it will pick up next season. Will Eleven get her power back? How will the show deal with the Byers moving out of Hawkins? What are the Russians planning to do with the Demogorgon? Will we see more of Dustin and Suzie together? With the kids slowly becoming adults and the mind-flayer still out there, I’m sure there will be no shortage of material for next year’s Stranger Things binge. read more

While everyone was celebrating New Year’s Eve, Netflix announced the third season of Stranger Things will premier on July 4, 2019.

The new trailer was released just after midnight on January 1, displaying Time Square on New Year’s Eve 1985 with the image turning upside down and flashing with shots of a computer screen and fireworks, then displaying the words, “One Summer Can Change Everything…”

Titles for the third season’s episodes include: “Suzie, Do You Copy?,” “The Mall Rats,” “The Case of the Missing Lifeguard,” “The Sauna Test,” “The Source,” “The Birthday,” “The Bite” and “The Battle of Starcourt.” read more

Elwes is a fan favorite of the genre, starring in the first installment of the iconic SAW series as Dr. Lawrence Gordon, the character that famously severed his own foot. He reprised his role in SAW 3D, which was released in 2010. In addition to his horror roles, the actor also appeared in Robin Hood: Men in Tights, The Princess Bride, Kiss the Girls, and Twister. read more