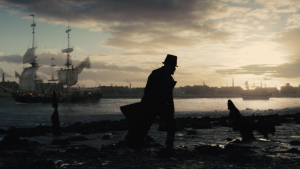 You never quite know what FX will come up with next. While the network’s programming is inconsistent overall, it is capable of producing quality works that bring out the best in actors and filmmakers. American Crime Story: The People vs. O.J. Simpson was one of those shows, popping up early last year with some of the best performances from its actors we’ve seen in years. With Taboo, FX has pushed the boundaries of quality television even further. Produced in part by Ridley Scott, the series features HBO alumni such as Oona Chaplin (Game of Thrones), Jonathan Pryce (Game of Thrones) and Stephen Graham (Boardwalk Empire), and the quality of the content would not feel out of place in any of their previous work for the premium network.

Obviously, Tom Hardy is the star of the show here. He (along with his father, Chips Hardy) is listed as the show’s creator, and it’s obvious that he is working on material he truly believes in. If you’ve seen Bronson, Warrior, The Dark Knight Rises, or Mad Max: Fury Road, you know what kind of performances Hardy is capable of. He has somehow mastered the art of dichotomy, often delivering nuanced portrayals of aristocracy and savagery, of tenderness and cruelty. 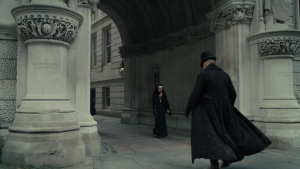 When it was announced that Bane would be the villain of The Dark Knight Rises, I was terrified that the amazing Christopher Nolan franchise was headed in a bad direction, hurling towards the worst period of time in the comic industry. However, Hardy’s Bane was so sophisticated and so intense that he ended up bringing depth to a character where depth never existed in the source material. Beyond that, one viewing of Bronson could cause any casual moviegoer to become a true believer in the physical and creative extremes that Hardy takes to deliver an unforgettable performance. His new character, James Keziah Delaney is no exception.

The walking embodiment of a monster dressed as a gentleman, it’s never quite clear what Delaney is up to, as he stalks the streets of London, until it’s too late. Many of his moments lumbering across old cobblestone in his flowing overcoat conjure up memories of Bane. His accent is oddly alluring and off-putting at the same time. He demonstrates moments of tenderness, but he is also capable of throwing a glare that could stop any man dead in his tracks. One can never quite tell whether a scene will be resolved by engaging discourse or by explosive bloodshed. 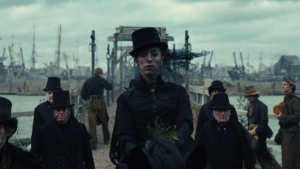 The story so far is that Delaney returns to London after learning of his father’s death. He has been gone for a long time, presumed dead but actually living in Africa. Rumors have circulated about some of his bizarre practices; and his tattoos, his scars, and his odd behaviors add legitimacy to the tales. He stands to inherit a crucial piece of land that is desired by the colonies of America and the English government as the American Revolution draws to a close. His half-sister, Zilpha Geary (Oona Chaplin) had already agreed to sell the land to the East India Company before Delaney returned, and everyone’s obviously upset that he’s “back from the dead.”

The show beautifully captures the hypocrisy of the “noble gentlemen” who negotiate with Delaney throughout the first two episodes. While they’re beautifully dressed and sipping from the finest teacups in England, their collusion is more vile and disgusting than the actions of the blood-spattered butchers Delaney speaks with on the streets of London. Jonathan Pryce has been particularly interesting in the show so far, displaying an explosive temper and an air of superiority that’s fun for the viewer to hate. It’s evident that the word “taboo” is going to have different meanings at different points in the show. Because taboos are cultural by definition, perspective is going to play a major role in how the show develops. For example, high society looks down on Delaney for his connections to Africa, while Delaney is deeply moved by the fact that he accidentally purchased a boat that was once used to transport slaves. 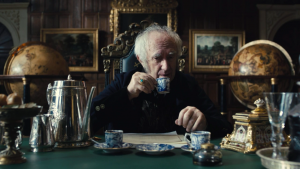 After two episodes, much of the story is still a mystery. It’s becoming clearer and clearer that James’ and Zilpha’s relationship is complicated; and most of James’ relationship with his mother and father is still a topic of speculation. We’ve seen numerous visceral visions of Delaney’s ritualistic past, but we’ve yet to discover what it all means. Hardy has stated in interviews that the show is a slow burner that will build towards a climactic ending. Right now, it’s a pleasure just watching the characters interact in their environments.

The show can be extreme at times, and the unpredictable nature of the star performer and the structuring of the scenes intensifies the feeling that we’re looking at things we shouldn’t be looking at. However, the magnetic qualities of Hardy’s Delaney makes us feel like we should be rooting for him even when he’s lighting someone’s boat on fire with very little evidence that the man was out to get him. He’s the kind of character you want to watch intently… but from a safe distance.

After two hour-long episodes, it is clear that FX’s Taboo is both sophisticated and visceral, offering a highly engaging premium cable television experience with an A-List star on a basic cable network.

Stay tuned to Horror News Network for more coverage of Taboo, as well as a review and analysis of Episodes 3 & 4 two weeks from today.

New Trailer for 'What We Do in the Shadows' Season Two Promises More Vampire Hijinks
FX Releases Official Trailer for Alex Garland's 'Devs'
New Versions of 'Carrie' and 'Salem's Lot' Coming to Cable Television
FX Shows Off Camp Redwood in New 'American Horror Story: 1984' Teaser
Sarah Paulson Will Not Return For 'American Horror Story: 1984'
'What We Do In The Shadows' Renewed for a Second Season on FX
John Evans

Staff Writer at Horror News Network
John has loved movie monsters for as far back as he can remember. He's since collected up as many comics, statues, and autographed material related to movies and music that he can get his hands on. He is particularly interested in the critical and analytical discussion of the best stories the horror genre has to offer. One of his largest works on the topic is a study on the portrayals of people with disabilities in horror films.
http://www.horrornewsnetwork.net/wp-content/uploads/2017/01/Screenshot-2017-01-18-at-7.08.01-PM.png 768 1366 John Evans http://www.horrornewsnetwork.net/wp-content/uploads/2016/05/HNN-logo.jpg John Evans2017-01-18 23:59:012017-01-19 02:07:53Taboo Episodes 1 & 2 Review and Analysis
0 replies