The 2018 South By Southwest Festival kicked off in Austin, TX, on Friday March 9th, and it’s already making some big noise in the horror community.  As reported by Deadline, Blumhouse Productions surprised most in attendance last night, as head honcho Jason Blum broke the news to the packed house that the untitled film they were about to show was actually a sequel to the 2014 financial hit Unfriended.  Now labeled as Unfriended: Dark Web, the film lit up the Alamo Ritz theater with the first of hopefully many welcome surprises as SXSW dominates the movie-going weekend.

Directed by Stephen Susco (writer of The Grudge and The Grudge 2), Unfriended: Dark Web marks his directorial debut.  The rumored sequel previously had a working title of Unfriended: Game Night, though it is unclear if Jason Bateman strong-armed Mr. Blum into the change so as not to confuse it with the comedic murder mystery of the same name currently in theaters.  The pivot in title could be beneficial, however, as it ties the film more closely to the “dark web” aura that has generated quite a buzz in recent years.  This could be a profitable (Silk) road for Blumhouse to travel down.

Speaking of profits, the production studio is hoping that the sequel can come close to generating the revenue-to-budget ratio that the original accomplished.  From a reported shoe-string budget of around $1 million, Unfriended would ultimately rake in about $64 million, an incredible feat in box-office strength.  Dark Web will unfold in real-time, entirely on a computer screen.  This could represent a new and unique spin on the “found footage” genre of horror movies that was ushered in by 1999’s Blair Witch Project.

No other details regarding a nationwide release date for Unfriended: Dark Web have yet been released, but we at HNN will keep our ears to the ground this weekend and into next week as the SXSW festival continues to unfold! 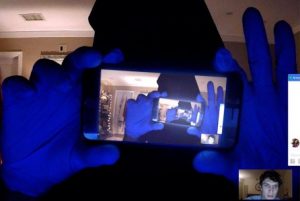 XYZ Films has landed the worldwide rights to the upcoming South African horror film, Gaia, according to a report on Deadline. In addition, a...
Read more

Ethan Hawke Joins ‘The Black Phone’ For Blumhouse And Universal

Ethan Hawke will be appearing in yet another Blumhouse film as the acclaimed actor has joined the cast of The Black Phone for Blumhouse...
Read more