The intricate, instantly recognizable artwork of Todd McFarlane and Greg Capulo immediately captured fans’ attention since the comic’s beginnings, and many accomplished artists have followed in their stead.  Since 2017, Eisner-nominated illustrator Jason Shawn Alexander has handled the art duties, and as we near the 300th issue of Spawn, Horror News Network reached out to Alexander to get his take on the milestone, as well as his contributions to the Spawn legacy.

Horror News Network: You have been illustrating Spawn since 2017.  How did the opportunity originally present itself?

Jason Shawn Alexander: I was emailed, out of the blue, from Todd.  I genuinely thought I was being pranked for a bit. We got on the phone and jelled immediately.

HNN: Your style fits the tone of the book very well, but was it difficult to take over a comic that is so well known for its artwork?

Alexander: It was and wasn’t.  Todd brought me on to change the look of the book to be more of a horror title.  He has always been very supportive and present with me. I was also a devoted Mcfarlane fan since Amazing Spider-Man.  He was the first artist I ever really emulated.  I knew I could add what I do now while staying true to the original vision.

HNN: Issue 300 of Spawn is quickly approaching.  What do you have in store for fans and this significant milestone for an independent title?

Alexander: I’ll be doing a signing at Golden Apple Comics in Los Angeles. It’s the shop where the original Image guys, including Todd, did their first signings. I’m also painting a cover for the issue, which I’m absolutely stoked about.

HNN: Where there any characters that you looked forward to drawing for “The Life and Death of Al Simmons” story line that you hadn’t had a chance to so far?

Alexander: I’ve just finished “The History of Spawn Parts 1 & 2” (Spawn issues 297 & 298)where we went through most of Spawn’s journey to catch people up before issue 300.  So, by now, I’ve drawn everyone in the Spawn-verse that I’ve wanted.  Sort of a dream come true. 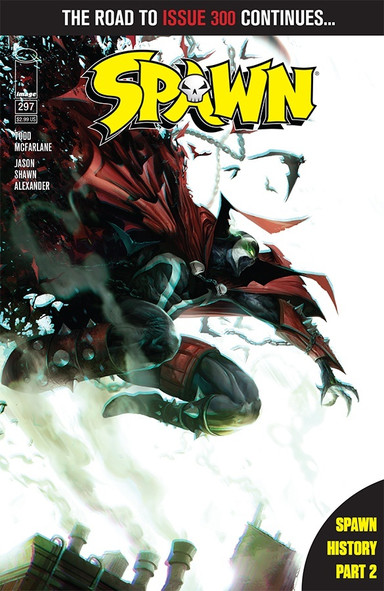 HNN: Most of your work in comics has been in the horror genre, including Creepy stories, Abe Sapien: The Drowning, and your creator-owned title, Empty Zone, among many others.  Why does the genre fit your sensibilities as an artist and creator?

Alexander: Horror has always grabbed me.  It exists entirely to evoke emotional responses. It keeps me engaged.  Also, I guess I just have some dark sensibilities.  My mother and older brother are huge Stephen King fans.  I grew up with horror as a backdrop in my life.

HNN: You also have exhibited your art in the past.  Any showings on the horizon?

Alexander: I decided to take a small break from gallery work and put everything I have into writing and drawing comics projects for the next 2 years.  I want to see where things can go when I’m 100% invested and not splitting my time in half.  If you like my work and you like comics, you’re gonna be pretty pleased over the next few months.

HNN:  What are some of the projects that you have coming up?

Alexander:  November debuts a whole new horror series from myself and writer, Rodney Barnes, called Killadelphia.  It will also be through Image Comics.  It’s seriously some of my best work to date and the book is amazing.  I can’t wait for you to see it.  I’m also starting art for the 3rd arc of Empty Zone (Image Comics).  On the side, I have 3 other scripts going either solo, or with other writers. It’s going to be a packed year!

Spawn #297 is currently on comic book racks everywhere and Spawn #300 will be released on August 31.

Fans of Todd McFarlane's Spawn have eagerly awaiting the inclusion of the undead hero in the latest Mortal Kombat game, Mortal Kombat 11, ever...
Read more

When it comes to comic book artwork, Todd McFarlane's work on Spider-Man and Spawn titles belong in an elite category with few peers. The artist broke...
Read more