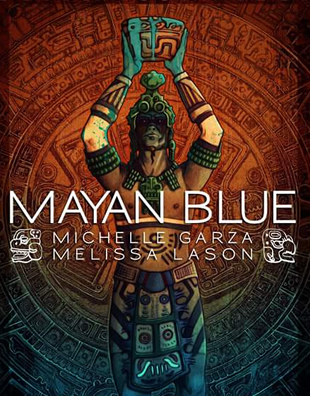 With a rich, tense and macabre handle on description and characters found within the pages of published works by the Horror Writer’s Association, Sinister Grin Press, Fireside Press and more, Melissa Lason and Michelle Garza share not only a disturbing bloodline but a creative and infamous storytelling focus infused with a twisted wit. The “Sisters of Slaughter” have cultivated a legacy that not only defines them as pillars of women in horror but damned storytellers in their novel “Mayan Blue” that blends the horror of history, science, anatomy as well as occult into pace tightening ride of hellish proportions. The creators of Xibalba took some time out to talk about not only “Mayan Blue” but the undead, influences, the edit and micro book presses here on Horror News Network.

What has the nickname the “Sisters of Slaughter” instilled in your combined writing confidence and creativity? How has working with Sinister Grin Press been on each level of “Mayan Blue”? Is there as well as what is the of working with micro presses?

Sisters of Slaughter- The nickname kind of symbolizes to us our determination. We must slaughter all challenges before us to bring the horror to the people. Sinister Grin has been really amazing throughout the entire process. They provided us with an amazing editor and publicist, Erin Al-Mehairi. They hooked us up with some awesome cover artwork by Zach McCain. We couldn’t ask for more. They have published and continue to publish some of the best in the business and we’re so excited to be a part of the Sinister Grin family.

What did the theme of sacrifice and survival mean to the overall story and characters?  How did survival influence in constructing the setting?

Sisters of Slaughter – This book is really brutal in the sense that we wanted to push these characters to the breaking point as far as what they would do to survive. We mapped out Xibalba and it’s a very unforgiving place, as it’s the land of fear. The sacrifices made in the story transcend flesh and bone, and the characters had to put their souls on the line to make it through this nightmare. It’s been called partially a survival horror, and it really is, as these people are stuck with very minimal tools to survive and sometimes push through on determination alone. 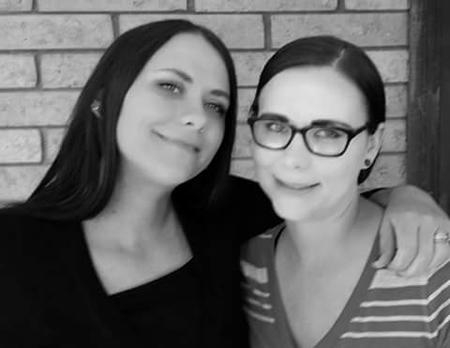 Why take on the idea of the Mayan culture? What does scientific discovery, tribal and cannibalism horror like that offer you?

Sisters of Slaughter – We’ve always been fascinated by ancient civilizations and mythology. When we heard about how some people speculate that the Mayans could have migrated up into the southern parts of the United States we became intrigued with writing a story about it, and since we are horror writers, it turned out to be quite brutal. The mythology of the Mayan underworld and its denizens just fit perfectly and we went from there. We are fans of movies like “Cannibal Ferox”, “Cannibal Holocaust”, and even “Ravenous”, because these stories bring people out of their comfort zone because the audience is taken to places where primitive ferocity still exists. The eating of another human’s flesh which seems like the ultimate sin is in some cultures no different than slaughtering a cow and chowing down. Some people say keep your friends close and your enemies closer while other civilizations prefer to keep their enemies digesting in their tummies.

Where did the idea for the landscape and world of Xibalba come from? Some of the aspects that embodies Xibalba is claustrophobia & isolation. How important was it to make sure that these two tools of psychological terror were fully flushed out and the description was as sensory as possible? By the way, I love the bloodsucking vines, where did they come from? Perhaps a too aggressive or too affectionate boyfriend?

Sisters of Slaughter – The landscape of Xibalba is described a bit in the mythology. It’s a place of fear, and anything living that enter it will soon begin to decay. In our book it’s cavernous, very dark, and filled with mortal danger. The rivers of blood and pus, the different trials that Wes has to endure, those are all a part of the mythology, but we changed them a bit to suit our story. We had to add the sources of light like the blue flame torches and the glowing moss in the forest. The vampiric vines were made up by us because we dug the idea of even the plants wanting to kill Wes and Alissa.

In “Mayan Blue”, you take the idea of the undead and bring this sub-genre of horror character back to more of its roots in voodoo as well as demonic possession with a hint of  “Texas Chainsaw Massacre.” Why include these kind of undead in the story instead of going other routines? Was there research that you two decided it fit best in Xibalba?

Sisters of Slaughter – We wanted our undead to be more like a deadite; we didn’t want mindless brain eaters. They needed to be able to follow the commands of the lord of death to do his bidding. They are filled with hatred for the living because they are damned to live in Xibalba, a not so fantastic place. It was also told in Mayan mythology that the rulers of Xibalba and the other demons there enjoyed humiliating humans before they killed them. That adds a level of conscience that your average zombie wouldn’t have. We also could not resist adding the scene where the owl man wears a certain character’s flesh. We are forever “Texas Chainsaw Massacre” fans and it will shine through in some of our stories. That scene was to strip that character of all she held dear, her looks, the creatures destroyed her body and spirit by taking that from her, what better torture? Ha!

Sisters of Slaughter – Ah-Puch symbolizes utter death, destruction, and darkness. The shadow priestess is the opposite but instead of shining like a white light, she burns with the fire of vengeance and will do anything to thwart him for taking everything from her. She comes to help the humans trapped in the underworld hoping to spare them the torment that she and her people endured. The four horsemen reference is definitely there because Au-puch has other wicked kings that serve beneath him, each specialize in different forms of death. They are also in the Mayan Mythology. We changed them slightly in our story but they are all equally grotesque and merciless as they were told to be.

The research and rescue college group are pretty standard characters at the start of the story that you would find as victims in most horror storytelling except for Wes and Alissa? Talk about the evolution of Wes and Alissa as the story goes on both individually as well as a couple? Also, why was it significant to have a male and female balance in a macabre, action thriller?

Sisters of Slaughter – We wanted to achieve that familiarity of some of the classic horror movies where a group goes into the forest but they never return whether they are killed by some sort of monster or a psycho path, but we also wanted to step beyond that trope. Wes and Alissa are forced into a nightmare where at first they are journeying together, you can feel them holding on though the outcome looks very bleak. They look to each other for support and it feels comforting to know they are together in the land of death. When they become separated is when we wanted to create more dreadful and hopeless situations for them to have to conquer and once they are reunited they have grown into these harsh survivors. Having a male and female lead character evened out the story, it showed that both sexes can be vulnerable and both can also be badass.

The final act of “Mayan Blue” is tragic, exciting and fast paced. It ties up certain aspects of this is very lush and palpable story but also leaves somewhat of an open door. Will there be a follow up in our future as Wes, Alyssa and the Shadow Priestess move forward?

Sisters of Slaughter – We have been asked about writing a sequel and we can assure you we haven’t ruled out that possibility. There’s plenty of mischief to be made in Xibalba.

Where did you struggle with MAYAN BLUE? How important was the editor on this book? What did the different drafts of the story help to flush out and define?

Sisters of Slaughter – We are so thankful for our editors and beta readers because there were parts they pointed out that needed elaboration or sentences that sounded a bit wonky. The editors are the behind-the- scenes artists, helping the writer create the best story they can. Ours did a fantastic job. We went through the manuscript three times. The first two we just added a little here and there to create a little more depth and the third time was to make sure grammatically it was on point. If there was an editor award we’d definitely nominate Erin Al-Mehairi!

Where can they pick up MAYAN BLUE and find out about the “Sisters of Slaughter”? What’s the next release?

Sisters of Slaughter – “Mayan Blue” is on Amazon and the Sinister Grin Press website. We are working on a science fiction book that will come out very soon and we also just finished a horror novel. Next year will be very busy for us because we’re planning three more books…possibly more than that. We’re workaholics!

Thank you so much for taking the time.

Jay Kay is a Horror News Network Contributor and “Rondo Nominated” Horror Journalist who hosts “The Horror Happens Radio Show.”  You can follow him in Twitter @HorrorHappensHS

It has been said that beauty is in the eye of the beholder, however, in the backwoods the beauty can be mistaken for the...

By: Jay Kay   “Vicki Beautiful”-Review & Insight with Author Somer Canon   “A lot of this was personal. I took from a lot of experiences. Something that...