Cautious optimism turned to genuine excitement when the details of the series were revealed Shudder’s New York Comic Con panel last year, when Greg Nicotero was announced as one of the executive producers and directors, with stories by some of the best writers in horror including King, Joe Hill, Joe R. Lansdale, and Bird Box’s Josh Malerman.

So, with all of the talent involved in Shudder’s new series, does Creepshow deliver the goods in the initial episode?

The anthology begins with a nod to both the EC Comics that inspired the original, and the animated introductions and wrap-ups that 1982’s film was known for (along with some mid-story animated transitions).  First up is an adaptation of a King story “Gray Matter”, written by Byron Willinger and Philip de Blasi and directed by Nicotero.  “Gray Matter” is both classic King and classic Creepshow with enough nods to previous King stories to break your pause button.  Once the story begins in earnest, King’s take on Lovecraftian horror sweeps the viewer into a dysfunctional family dynamic (Christopher Nathan as the son and Jesse C. Boyd as the neglectful father) that hides some truly bizarre behavior and consequences.

Tobin Bell, Giancarlo Esposito, and Adrienne Barbeau (returning to Creepshow after a bad experience with a shipping crate) “class up” the segment, and it was good to see Bell play against type as the kindly officer of the law along with Esposito as his stalwart ally.  Once Nathan’s character shows up at a store before the arrival of “a storm of the century”, the unfortunate father and son relationship is revealed to the three adults, who take a keen interest in the father’s well-being.

With Nicotero’s background in special effects, it should come as no surprise that he delivers a sloppy, terrifying creature in the worst possible of moments for the tandem of Bell and Esposito.  If Creepshow is about delivering unique “monsters of the week”, “Gray Matter” succeeds and should please fans of the many monstrosities that crawled through the original film. 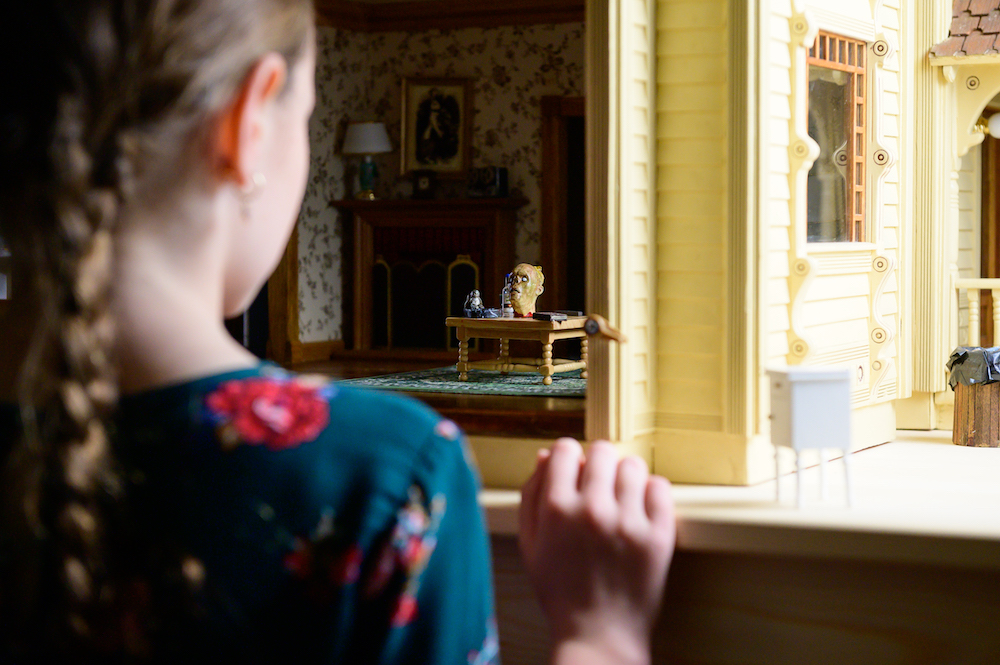 The second segment, “The House of the Head”, takes a markedly different approach than “Gray Matter”, but not one that seems out-of-place in the world of horror anthologies or comics. “The House of the Head” (written by Malerman and directed by late 1980s syndicated anthology Tales from the Darkside alum John Harrison) tells the tale of young Evie and her “one-of-a-kind” dollhouse.  Unlike most dollhouses, Evie’s contains some unlikely accessories (which bares more than a resemblance to some of Nicotero’s zombie heads from The Walking Dead) which cause considerable concern to Evie, as her clueless parents continue to express only a modicum of concern for their obsessed daughter.

While the plot proves interesting and makes viewers engage in a cinematic version of “Where’s Waldo”, the young lead Cailey Fleming does not convey the sense of terror or menace that is required to make you care for her or her barely seen parents.  Horror films and series have always traded on the concept of putting children in danger (going back to our earliest nightmares as children), but when the viewer is distracted by a child actor’s performance vs the dread we are supposed to fear for her, the results are not usually positive.  In spite of the casting choices for the segment (and direction), “The House of the Head” does feel like it belongs in the Creepshow series, and balances out the more visceral elements of “Gray Matter.”

Shudder’s Creepshow launches on Thursday, September 26 at 9 pm, both on the Shudder TV live-stream and on demand.  The five remaining episodes will premiere live and on demand on Thursdays at 9pm as well.

Staff Writer at Horror News Network
Nick joined the website in 2015. His lifelong love of comics and horror began with Universal Monsters and the Incredible Hulk. He has fond memories of going to Waldbaum’s supermarket with his mother and being rewarded with a 3-pack of sealed comics. It’s been all downhill from there… Since those early days, his life has been immersed in four color action and scares on the silver screen.
http://www.horrornewsnetwork.net/wp-content/uploads/2019/09/Giancarlo-Esposito-and-Tobin-Bell-in-Gray-Matter-Creepshow.jpg 432 768 Nick Banks http://www.horrornewsnetwork.net/wp-content/uploads/2016/05/HNN-logo.jpg Nick Banks2019-09-24 06:28:432019-09-24 06:31:03Shudder's 'Creepshow' Episode One: The Horror News Network Review
0 replies

HNN Productions’ ‘Halloween in a Box’ Documentary Gets Distribution...
Scroll to top