The die-hard fans of Joe Bob Briggs can rejoice as season two of his series The Last Drive-In won’t be the last!  Shudder announced on Tuesday that the streaming network’s popular Friday night series, which resurrected a now 30-plus year run on television for Joe Bob, will be renewed for a third season.  In addition, there will be a “summer sleepover” double feature to air on Friday, August 14th.  Announcements from both the network and Briggs on social media can be viewed below.

This is music to the ghoulish ears of horror fans.  The latest incarnation of the Joe Bob Briggs double-feature format (following Joe Bob’s Drive-In Theater on TMC from 1986-1996 and MonsterVision on TNT from 1996-2000) was brought back to life in 2018 by the video-on-demand service as The Last Drive-In with Joe Bob Briggs for a 13-film marathon.  Due to the overwhelming popularity of the event (it was reported that Shudder’s servers actually crashed), marathons were then scheduled for Thanksgiving and Christmas of that year.  The first official season debuted on March 19th, 2019, and the second season just concluded back in June.  Highlights of the latest season included airings of One Cut of the Dead, Troma’s War (with Lloyd Kaufman), Bloodsucking Freaks, Briggs’ own star turn in Hogzilla, and Cannibal Holocaust (which is the only time Shudder has posted the commentary segments on-demand but not the actual film.) 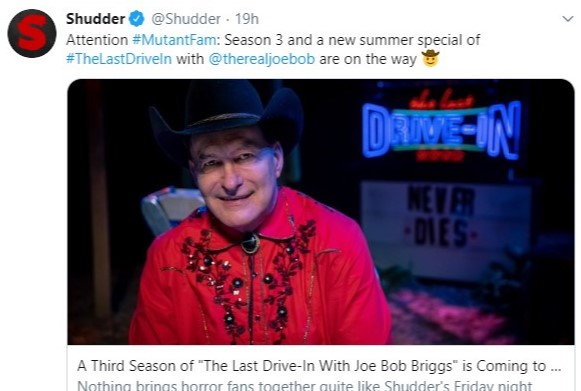 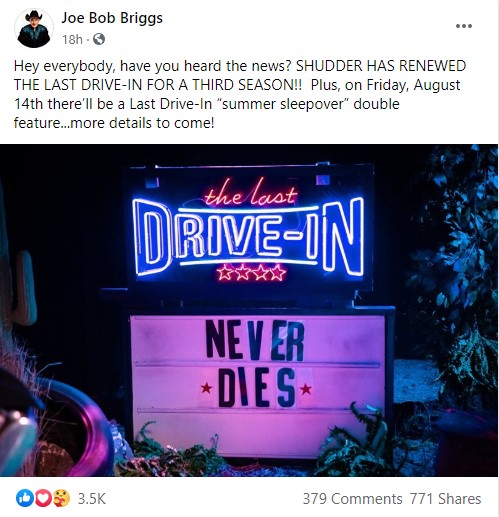 While no further details regarding season 3 have yet been announced other than a 2021 release, Joe Bob’s “mutant family” can look forward to the summer double feature on Friday, August 14th.  Guest appearances are planned, with Adam Green (Hatchet) having already been announced.   Before we know it, those drive-in totals will be filling our screens and #TheLastDriveIn will be trending nationwide once again!

Stay tuned to HNN for more news on The Last Drive-In with Joe Bob Briggs and the upcoming third season as it breaks!