This April, Shudder celebrates the midpoint to Halloween with the launch of Halfway to Halloween Month.  Shudder promises that April will be”… its biggest month of non-October programming ever, at a time when many people are turning to streaming to help entertain them while they’re social distancing and quarantining.”

To get the party started, Shudder’s new original series Cursed Films (described as “…a five-part documentary exploring the myths and legends behind some of Hollywood’s notoriously cursed horror films: The Exorcist, The Omen, Poltergeist, The Crow and Twilight Zone: The Movie) begins on April 2 with an episode focused on The Exorcist.  The other episodes will debut in order twice a week on April 9 and April 16.

April also sees the return of an all-new season of The Last Drive-In with Joe Bob Briggs, with a new double feature every Friday night, streamed live on Shudder.  The shenanigans begin on Friday, April 24 at 9 pm ET and will conclude on Friday, June 26. 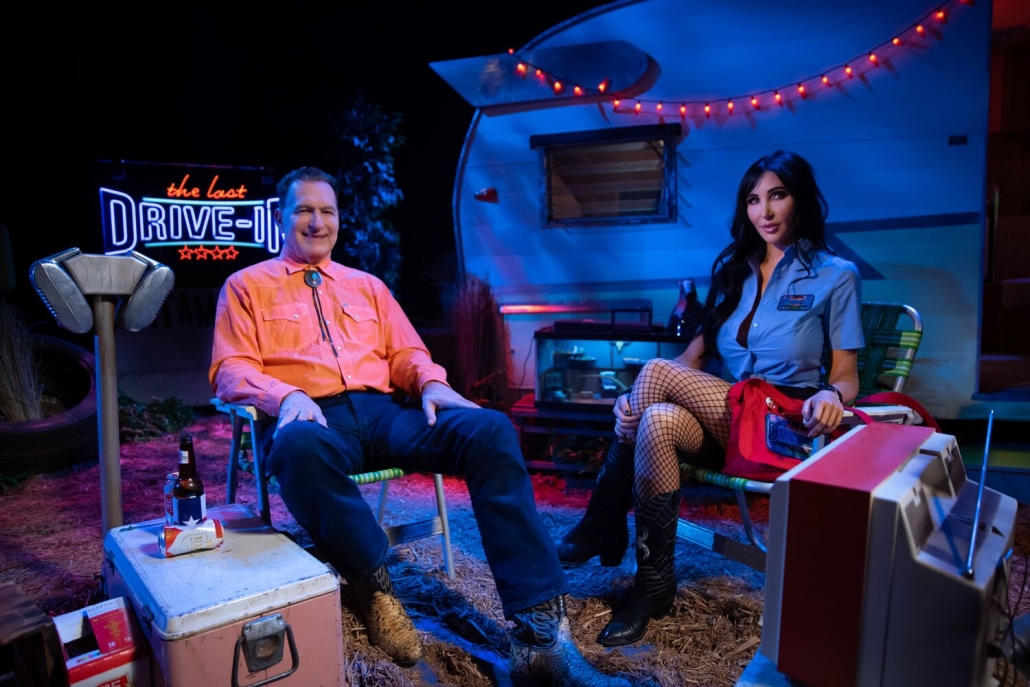 In terms of horror films, The Friday the 13th Collection comes your way this April, including the first eight movies in the series as well as the three related documentaries including the exhaustive six-hour documentary Crystal Lake Memories: The Complete History of Friday the 13th, Smoke and Mirrors: The Story of Tom Savini and To Hell and Back: The Kane Hodder Story.

A special Halfway to Halloween collection will capture the essence of the holiday with favorites like Tales of Halloween, Haunters: The Art of the Scare and Extremity, Hell House LLC, Haunt, Spookers, Halloween, Halloween 4, Halloween 5, Rob Zombie’s 31, the Creepshow series and The Ghoul Log (a Halloween version of the Yule Log, a local cable Christmas favorite).

Last but certainly not least, Shudder’s Halloween Hotline, with live, personalized horror movie picks from Shudder curator Samuel Zimmerman, will take place every Friday in April  from 3-4pm ET.  As described in the official press release, “Movie lovers from around the world are invited to call Sam (via a new number to be announced)…and tell him about their mood or taste. From that information, Sam will use his horror knowledge to pick a film from Shudder’s vast library custom-suited for them. Call volume is expected to be high, so if you get a busy signal please keep trying. We can’t promise every call will be answered, but Sam will get to as many as he can during each hour.”

New members can sign up at Shudder.com with promo code SHUTIN for an extended 30-day free trial.  Check out a preview of the Ghoul Log below as an early treat from Horror News Network.