What’s more terrifying than the baggage fees and reduced legroom on commercial airlines? A plane riddled with demonic possession, of course! Scream Factory has the answer for anyone who ever wondered what would happen if you mixed Airplane! with The Exorcist in their new film entitled Exorcism At 60,000 Feet. This horror spoof stars genre staples such as Lance Henriksen, Bill Moseley, Adrienne Barbeau, and Bai Ling, and it’s coming to digital, blu-ray, and DVD on May 5th, 2020. To hype up the upcoming release, the folks at Scream Factory have unleashed a trailer online which contains all sorts of wacky mashups of two popular genres:

The trailer also includes an official synopsis of the film:

“Fasten your seat belts and fly the fiendish skies.

We all know that air travel can be hell – but on the last flight of a transatlantic passenger airliner, things turn positively demonic when a pandemic of infernal possessions breaks out, spreading from passenger to passenger … and eventually to the pilot. In order to land safely and survive, a priest, a rabbi, and the surviving crew must band together against the most ungodly turbulence imaginable.

A wild horror comedy featuring genre faves Bai Ling (Dead Ringer), Lance Henriksen (Aliens, Pumpkinhead), Bill Moseley (The Devil’s Rejects), and Adrienne Barbeau (The Fog, Swamp Thing), Exorcism At 60,000 Feet will have you screaming in the aisles… but remember: in case of an emergency landing, please keep your tray tables – and crucifixes – in the upright position at all times!” 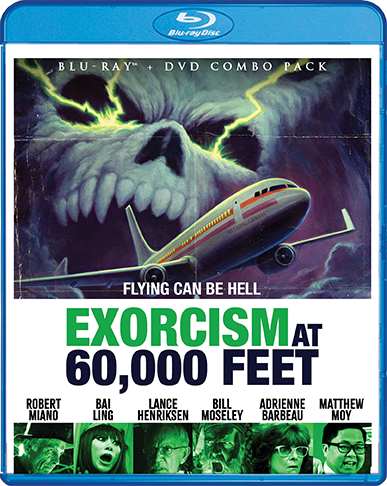 The blu-ray/DVD combo pack will also include the following bonus features:

Stay tuned to Horror News Network for complete details on all things Scream Factory as soon as it breaks!

According to Deadline, Roger Corman and his wife Julie Corman are currently being sued by their sons over the recent sale of a vast...
Read more

Ron Perlman and Christopher Plummer will be voices in the upcoming animated film 'Howard Lovecraft and the Frozen Kingdom' from  Shout! Factory.  Sean Patrick...
Read more