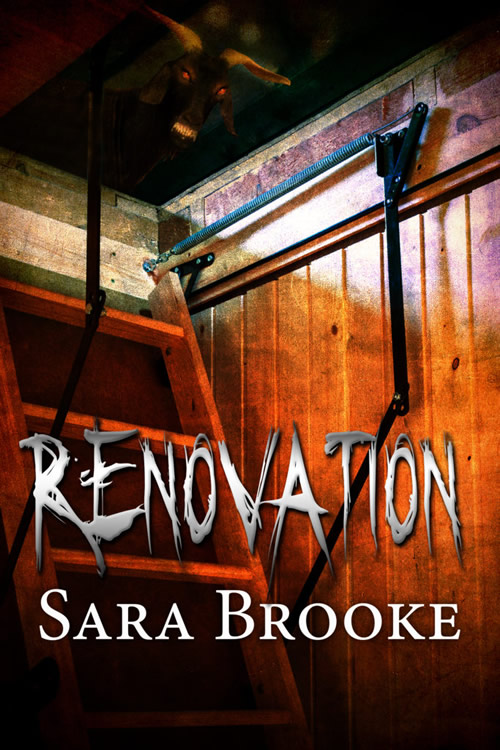 RENOVATION has an entirely different feel from your previous written works. It blends several different sub-genres of horror under one roof. Sorry for the pun… Anyway, where did this story idea come from and why was it a good time to release this book with SINISTER GRIN PRESS? How has it been working with them?

Sara Brooke: This story really came to light when I was living in a home with a rather large roof. The roof was more than 20-years-old and it was time to get it replaced. At any rate, I was out walking my dog and trying to ignore the insistent banging, while gingerly avoiding the nails that littered the grass. It occurred to me that home renovations are truly intrusive and can really upset the fine balance of a person’s “safe haven”. I wondered what would happen if things just got worse and worse . . . and hence, RENOVATION was born.

Horror News Network: What influenced the construction, dysfunction and the breakdown of The Brenner family? What helped influence the character of Bob especially his appearance and mannerisms? How important was it to have a distinctive and perhaps sympathetic backstory for Bob?

Sara Brooke: The idea of an entirely normal family just looking to have a decent life and be a part of the “American Dream” truly influenced the start of the story. I am a big believer that many people seek that kind of life but sometimes things don’t work out the way they should. Mikey was an average guy, about to experience something that was anything but average. And Bob was never sympathetic. He was cunning, and very evil.

Horror News Network: Your work has varying levels of sexuality depending on the story. However, it fits the overall structure of story. Talk with me about the symbolism and connection of the house and the sexuality between the triangle of Bob, Barb and Mikey? How much did fantasy play into each character since each character has a different fantasy throughout?

Sara Brooke: The sexuality in this story is key because it often means the end or the beginning of a key moment. In essence, it serves as a sort of arc that gives the reader an understanding that the act itself and all it stands for, is leading to a place one didn’t quite expect. There is true love between Mikey and Barb. But for Bob, it is all about possession and the satiation of an ages-old ache he longs to put to rest.

Horror News Network: Barb is a very deep character. On one hand she is a mother, wife and pillar. On the other hand with the story, she finds the woman she seem to sacrifice with temptation, sexuality and independence. The liberation and her new life perspective is a storyline that really causes conflict within me as a reader. I understand it is her life and a brave choice overall to find herself as well as change her role and life. However, at same time, it goes against the bond of marriage and the role of a being mother, she becomes almost an addict. Talk for me about the complexity of her character, the bravery and the influence that cultivated her throughout the book? Also her evolving look as she fully gives into the pleasure and tragedy?

Sara Brooke: In truth, Barb is a victim. She is not entirely making her own decisions. Yes, she is feeling suffocated and trapped in the life of a middle-aged housewife. But she has accepted this life and longs for peace and safety – given a rougher childhood. However, there is more at play than meets the eye, and Barb is defenseless against the evil. Her husband is in pure denial as it relates to the state of their marriage and the evil surrounding them, so it makes it easier for her to fall down a dark hole when there is no safety net at the bottom – and once it does appear, it may be too late.

Horror News Network: It’s interesting how an evil act or reaction can change your feelings and perception about a home and safety. Talk about that theme pertaining to the house itself in RENOVATION and the aspect of the fluid idea of violation that grows in the home cultivating evil and change in The Brenner family structure?

A home is a haven. It is that simple. And once it is breached, there are very intense repercussions involved. The evil in RENOVATION is like a cancer. It spreads and spreads until everything has been saturated and contaminated.

Horror News Network: Greg is a very borderline character due to his age, understanding of life and his role within the family. Why incorporate him into the narrative?

Sara Brooke: Greg’s character is an important reminder to not always take teenagers or the youth, with a grain of salt. I know it sounds cliché’ but oftentimes, parents disregard and dismiss their children’s fears simply because there is a difference in an age. This is a situation in which, Mikey — who is so desperate to succeed in his new life due to a series of failed jobs – simply doesn’t open his eyes wide enough to what is happening around him, but Greg is not blinded by ambition or high hopes and sees things as they really are.

Horror News Network: Usually horror happens in a specific location. In RENOVATION, the final temptation and acts happen in the attic. Why the attic and the not the basement? Was the house as a whole, symbolic of the human body and the process of deterioration and possession?

Sara Brooke: For starters, basements are not commonly found in Florida;) Most homes have attics, but it is rare to find a home with a basement. The attic spans the length of the house and is a creepy, difficult to navigate place. It was perfect for the final scene.

Horror News Network: Can you talk about the macabre and creepy elements of RENOVATION like the roaches, wet spots and mold among other things? They have so many different affects including repulsion, paranoia, dread and fear depending on the person. How did these aspects affect you as a storyteller reflecting ad influence the book? Did any of your fears influence the writing of the book in anyway?

Sara Brooke: All of the elements you mention are part of the cancer that is taking over the home and serve as elements of that degradation. However, the roaches were a special touch. They represent the bottom-feeders of society and even of their own insect category. And they’re downright disgusting…perfect as the denizens of fallen angels.

Horror News Network: How much fun is it to write sex, romance and temptation within a horror landscape?

Sara Brooke: I don’t write those elements into the story for fun. Rather, they occur as part of what is happening. Sex, romance, and the like are all real parts of life. I want my stories to be as real as possible while challenging the constraints of logic. That’s why they are included.

Horror News Network: Life is constantly changes and things can change how we see them whether on a micro or macro scope. Did this story change at all during the time you created it?

Sara Brooke: Strangely, it did not. I outlined the novel before I began writing it and it stayed true to that outline for the entire book.

Horror News Network: What’s next for you and where can we find more about you?

Sara Brooke: Hopefully, more books. I’m currently working on Book Three of the Bloodmane Chronicles and working on numerous TV projects. I‘m available on Facebook, Twitter, and on my website at sarabrooke.com.

Horror News Network: Thank you so much Sara for your time!