Rumble: A Woe that is Madness Graphic Novel TP Review

Synopsis: Long time B.P.R.D. writer John Arcudi and artist James Harren create their own brand of monster mayhem at Image in this creator owned series that will definitely appeal to fans of Arcudi’s and Harren’s previous work.

Our Thoughts: John Arcudi’s run on B.P.R.D. has consistently been one of the best horror/monster comic books on the shelf. The stories are always filled with unimaginable horrors, but also deft characterization and story work juggling a large supporting cast. A recent addition to the Mignola-verse’s host of characters is the ancient sword wielding Agent Howards. Possessed or reincarnated as a prehistoric warrior, Howards often “steals the show” from already well-established characters like Johann Krauss and Liz Sherman. And I’m here to tell you that if you enjoyed Arcudi’s work on this title (and Agent Howards in particular), you owe it to yourself to grab a copy of the latest Rumble collection.

Along with fellow B.P.R. D. artist James Harren, Arcudi has created another engaging “universe” and cast of characters. Filled with ancient gods, sword-wielding berserkers, evil henchmen, and every-day schlubs, Rumble is one of the best new titles from an experienced team of story-tellers. While some of those elements may seem familiar, let me assure you that while the content veers close to the Mignola-verse at points, in the end this universe is more nuanced and gray than recent B.P.R.D stories with all of the typical mayhem fans are used to.

The narrative’s anchor is every-man Bobby LaRosa who has a dead end job, a questionable compatriot named Del, and no love life to speak of. His job as a bartender at a local dive gets much more interesting after a sword wielding scarecrow chops of one of his regular’s arms. The pace picks up rapidly and Bobby and Del are thrown into an ancient battle between “good” and “evil” gods with former hero-god Rathraq reincarnated in a scarecrow’s body.

Rumble Volume Two: A Woe that is Madness collects issues 6-10 of this ongoing series and picks up where volume one leaves off with Rathraq’s quest for his original form. Arcudi masterfully blends a wide variety of influences in this title ranging from world mythology to Robert E. Howard brand machismo. The flashbacks in this story arc truly bring into question how one’s point of view colors a story and cultural history.
Do we believe the warrior who slays the monster or the peaceful people who depend on the monster to safe guard their homes? This debate is a tough one to wrap your head around and the question is one that pertains to our world as much as it does Bobby and Rathraq’s tale. The characters are sympathetic, multi-layered and engaging; a trademark of Arcudi’s previous work.

Frequent collaborator James Harren brings a frentic style to the omnipresent battles and creatures that inhabit this title. Fans of his work on B.P.R.D. and Conan will enjoy his variety of monsters and “rumbles”, something which Harren is particularly know for. His battles in particular convey a great sense of movement and speed, which is difficult to communicate in a four-color comic.

Both volumes are currently available and issue #11 of Rumble (released on 6/22) is currently on the rack at your local comic store. 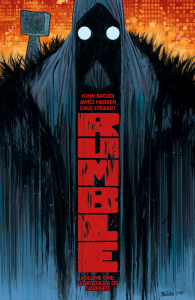 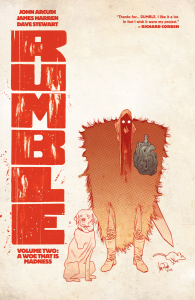 Fans of the Mignolaverse have been engrossed in the new Koschei the Deathless mini-series since its debut in late 2017, celebrating the tale that explores one...
Read more

Mike Mignola's series of comics set in the world of Hellboy and the B.P.R.D. have been some of the best on the rack for...
Read more