People who love Halloween tend to be the nostalgic short.  Whether it is due to the longings for plastic Halloween masks, candy that no longer exists, monster toys that you can only find on ebay for outrageous prices, or favorite movies and TV shows that keep the spirit of Halloween alive all year long, Halloween fans love to indulge in the past.

So if you are looking to whet your appetite for nostalgia this Halloween season, Michael Eury’s (the founder and editor of Back Issue! Magazine-the preeminent publication for comic book fans) Fall 2018 issue of Retro Fan has just the stuff you’re looking for!

Following the same format as the inaugural issue, the magazine if filled with 80 pages of in-depth coverage of all the best from the 1960s to the 1980s.  The emphasis on Halloween and related topics is pretty apparent from the start, especially with Elvira, Mistress of the Dark featured smack dab in the middle of the cover, along with snap shots of Ben Cooper masks, dinosaurs, and The Groovie Goolies.  On the other hand, if you’re not a big Halloween person, have no fear, because close to a third of this issue of the magazine is dedicated to stories that will entice any fan of pop culture nostalgia with extensive articles on Super Hero View-Masters, the art of collecting metal lunch boxes, and mood rings.

The main event this issue is indisputably Halloween however, and with articles on the history of horror movie hosts (with an emphasis on Elvira: Mistress of the Dark), the Groovie Ghoulies, Bewitched, The Addams Family, The Munsters, and Ben Cooper’s masks, you are bound to get your money’s worth.  The most surprising and exhaustive article in the entire magazine is the one dedicated to Filmation’s monster band: The Groovie Goolies.  If are unfamiliar with the Goolies, don’t worry, because writer Any Mangels’ history of the cartoon (totaling 12 pages!) provides newbies with a comprehensive time-line and even the biggest fans of the cartoon will be green with envy at the level of research and effort that Mangels put into his piece.  Retro Fan’s sister magazine Back Issue! is well-known for this type of coverage when it comes to comic books, so it is nice to have a new magazine with the same level of dedication to other aspects of pop culture. 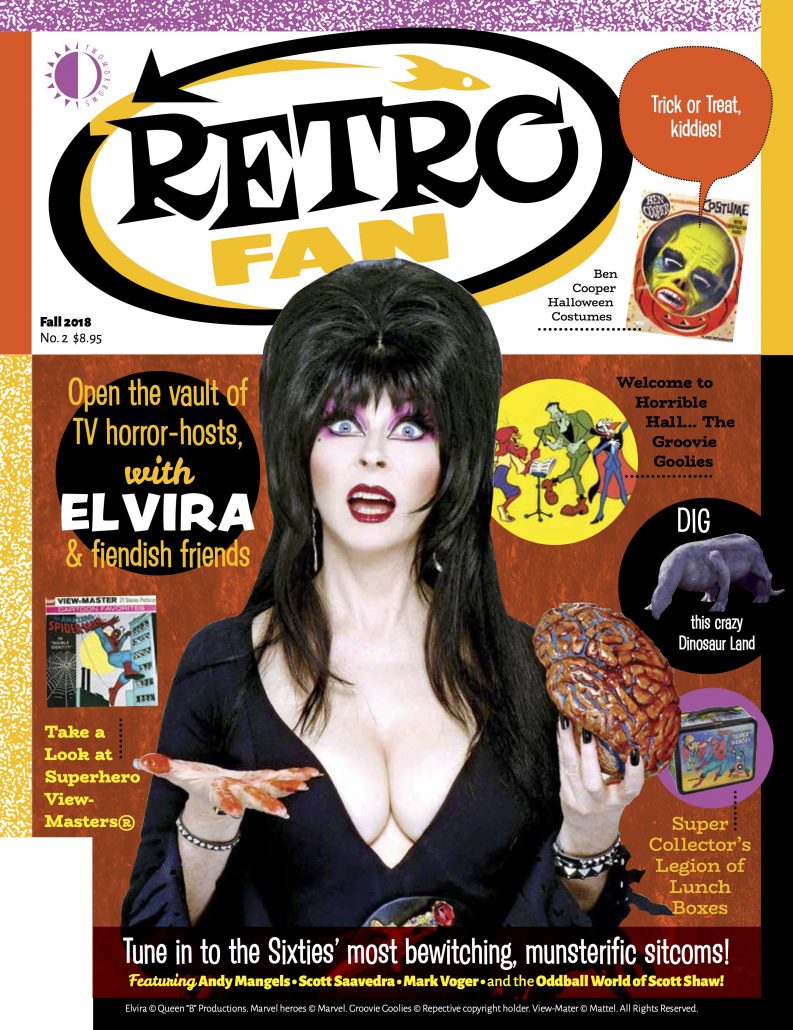 Staff Writer at Horror News Network
Nick joined the website in 2015. His lifelong love of comics and horror began with Universal Monsters and the Incredible Hulk. He has fond memories of going to Waldbaum’s supermarket with his mother and being rewarded with a 3-pack of sealed comics. It’s been all downhill from there… Since those early days, his life has been immersed in four color action and scares on the silver screen.
http://www.horrornewsnetwork.net/wp-content/uploads/2018/10/retrofan-2-promo-cover.jpg 3262 2512 Nick Banks http://www.horrornewsnetwork.net/wp-content/uploads/2016/05/HNN-logo.jpg Nick Banks2018-10-14 14:00:162018-10-14 14:00:16'Retro Fan' #2 The Halloween Issue: The Horror News Network Review
0 replies