Blog - Latest News
You are here: Home / Horror Movies and TV Shows / Rest in Peace: George A. Romero Dead at 77 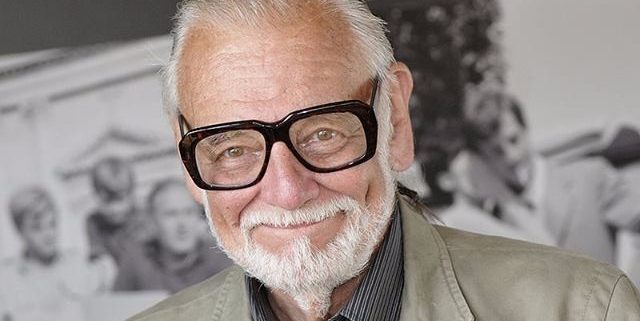 It is with heavy hearts that the Horror News Network team reports that legendary director/writer/producer George A. Romero has passed away at the age of 77. Romero transformed the horror landscape with such indelible classic films as Night of the Living Dead, Dawn of the Dead, Creepshow, and numerous others. This visionary artist literally invented the modern zombie story, and later works such as Resident Evil and The Walking Dead wouldn’t exist without his contributions to cinema.

“Legendary filmmaker George A. Romero passed away on Sunday July 16, listening to the score of The Quiet Man, one of his all-time favorite films, with his wife, Suzanne Desrocher Romero, and daughter, Tina Romero at his side. He died peacefully in his sleep, following a brief but aggressive battle with lung cancer, and leaves behind a loving family, many friends, and a filmmaking legacy that has endured, and will continue to endure, the test of time.”

In addition to bringing a sophisticated element to his filmmaking which opened the door for horror films to explore advanced concepts of social and political elements of human nature, Romero simultaneously raised the bar for terror and grotesque imagery in modern horror films. Working with longtime collaborator, Tom Savini, Romero brought a level of special effects to his gore which had never been seen before. This dichotomy of intelligent, humanistic, and gruesome storytelling has rarely been attained by even his most adept peers in the world of filmmaking.

Beyond his incredible talent for filmmaking, George Romero was also known for his open and warm interactions with fans throughout his career. He was a horror convention favorite because of his friendliness and charisma. Fans everywhere couldn’t help but walk away from his table with a wide smile on their faces.

The Horror News Network staff would like to extend our deepest sympathies to his family. In his passing, George A. Romero joins the ranks of the permanent legends of filmmaking. May he rest in peace, and may new fans continue to discover his genius for generations to come.

Staff Writer at Horror News Network
John has loved movie monsters for as far back as he can remember. He's since collected up as many comics, statues, and autographed material related to movies and music that he can get his hands on. He is particularly interested in the critical and analytical discussion of the best stories the horror genre has to offer. One of his largest works on the topic is a study on the portrayals of people with disabilities in horror films.
http://www.horrornewsnetwork.net/wp-content/uploads/2017/07/romero.jpg 442 640 John Evans http://www.horrornewsnetwork.net/wp-content/uploads/2016/05/HNN-logo.jpg John Evans2017-07-16 21:56:482017-07-17 01:11:59Rest in Peace: George A. Romero Dead at 77
0 replies

Rest in Peace: Martin Landau Dead at 89
Scroll to top