Dynamite recently announced a new Reanimator comic book from creators Cullen Bunn and Blacky Shepherd, connecting the maniacal Herbert West to the wider Cthulhu mythology of H.P. Lovecraft, with a story that serves as a direct sequel to the original short story.

We caught up with writer, Cullen Bunn, to talk about this upcoming Reanimator tale.

This project, which was launched on Indiegogo, was funded within hours. As a writer, how does that feel to have so many people interested and anticipating this book?

Cullen Bunn: I write because I want people to read these stories. That may seem like an obvious statement, but sometimes I feel like it’s not. So, when I see readers gravitate toward something I’m working on, it is always a thrill. I love these stories and characters so much, and I want others to love them, too!

Horror News Network: Can you talk a little bit about your love for all things Reanimator? When were you first exposed to the story, the movies, etc.?

Cullen Bunn: I think I had already been exposed to Lovecraft’s fiction before I saw the movie version of Reanimator, but I don’t think I had read the story at that point. After watching the movie, I sought out the story. While I can see why Lovecraft was never a huge fan of the tale, I enjoyed reading it quite a bit. Over the years, I’ve enjoyed quite a few of the Reanimator comics, but I always wanted something that was more firmly set in the timeline of the original short story, so here we go!

Horror News Network: This book picks up after the events in H.P. Lovecraft’s Herbert West-Reanimator. What can readers expect to see from the good doctor himself, Herbert West?

Cullen Bunn: At the end of the original short story, Herbert West is believed dead, slain by his own undead creations. In this tale, set a few short years later, we learn that West is still alive. He’s been in hiding, perfecting his formula and carousing with a mysterious femme fatale. But when his formula is stolen, he is sent on a quest to track down the thieves. The culprits have foul intentions for the formula—far more insidious than anything West could have imagined!

Horror News Network: As a writer, is there any added pressure of doing a story “justice” when you are working with characters that were created and developed elsewhere?

Cullen Bunn: Sure, I want fans of the characters to enjoy this story, and that adds a little pressure. In the end, though, I need to have a little faith in myself. I’m banking on the idea that this is a new story, something readers haven’t seen yet, and my own excitement for the story I’m telling helps to quell any worries pretty quickly.

Horror News Network: Blacky Shepherd joins you as the artist on Reanimator The Enternal Lie. What is it that impresses you the most about his work on the book?

Cullen Bunn: Blacky and I worked very closely in bringing this book to life. I brought the original idea to the table, and Blacky just latched onto it and added his own ideas and really made it his own. The story goes from Arkham to Innsmouth, both locales that are important in the world of the Cthulhu mythos, and Blacky gave them such distinct looks. He also designed some amazingly cool monsters for the book. Seriously, I want action figures of those critters! Not that I think any earthly toy manufacturer could make them!

Horror News Network: Can you talk a bit about what it means to also have Francesco Francavilla on board to do a variant cover?

Cullen Bunn: Francesco is a good buddy, and he is obviously a master of cover art. He’s also a huge horror fan, and that comes across in his work. Having his work grace one of the covers is a real honor.

Horror News Network: Can you talk a little bit about the perks and rewards for backing this project?

Cullen Bunn: In addition to the multiple covers, we’ve got this great serum pen. I want a bunch of those myself. And we’ve got an awesome enamel pin. There are also reward tiers and add ons that include remarqued covers and sketch covers. There’s even a board game. And I think more items will be added on as we attain higher funding levels.

Horror News Network: Do you have any plans of continuing the adventures of Herbert West in another Reanimator series?

Cullen Bunn: Yes! Blacky and I have plans to continue this story. We need to do so. And there will be a point in the campaign that if we hit a certain funding level, the next volume will be greenlit! So… support of the project is definitely important!

Horror News Network: In closing, what would you like to say to our readers about this new Reanimator comic?

Cullen Bunn: The ending of this book packs a one-two punch of wild surprises. I don’t think anyone will be prepared for where this story is going! If you’re a fan of Herbert West, we’re telling the next part of his story, and we’re cementing his place among the Cthulhu mythos.

Horror News Network: Thanks for your time Cullen! Best of luck with this Reanimator series. 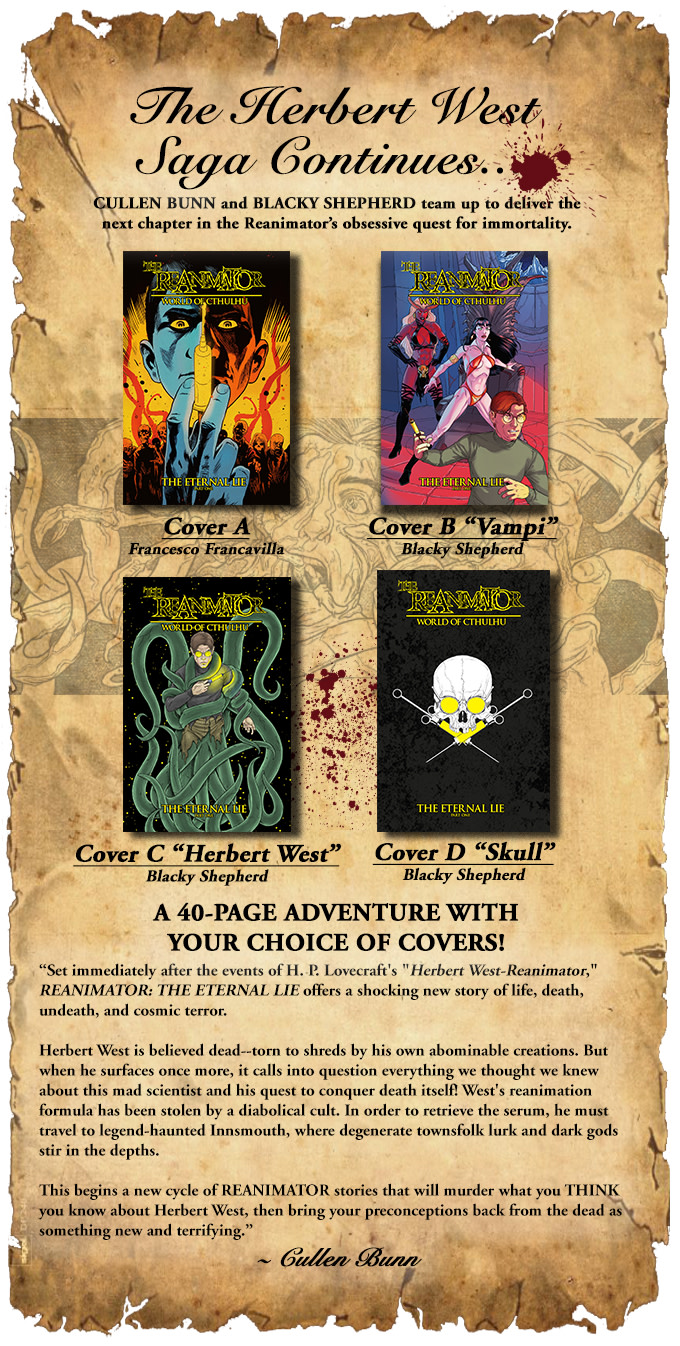 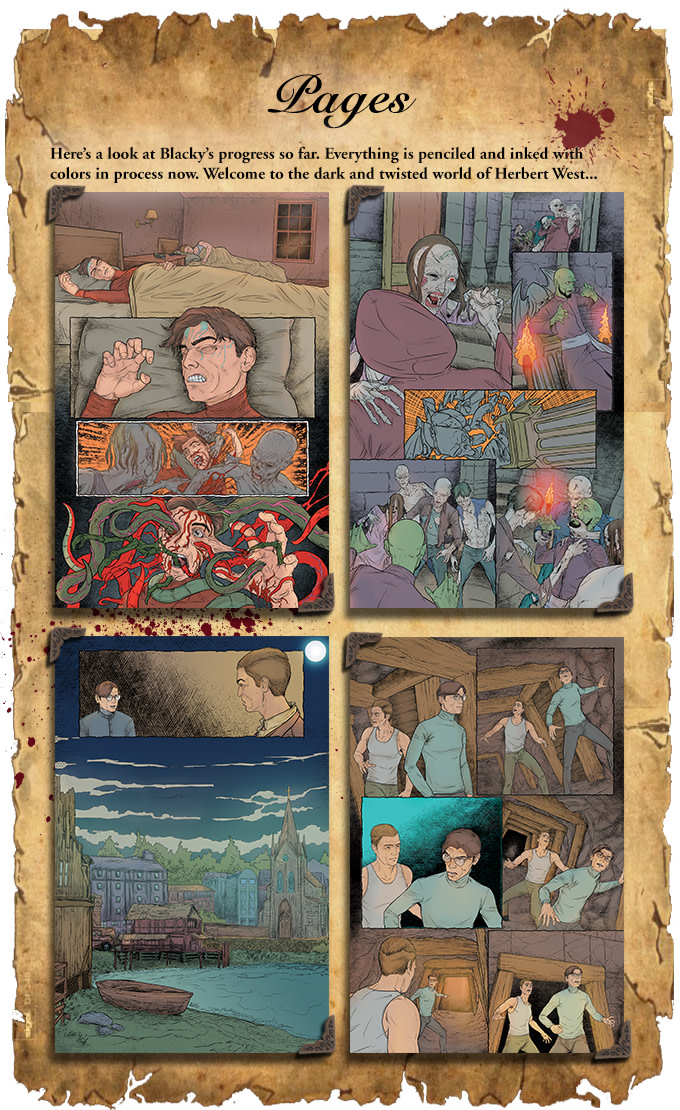 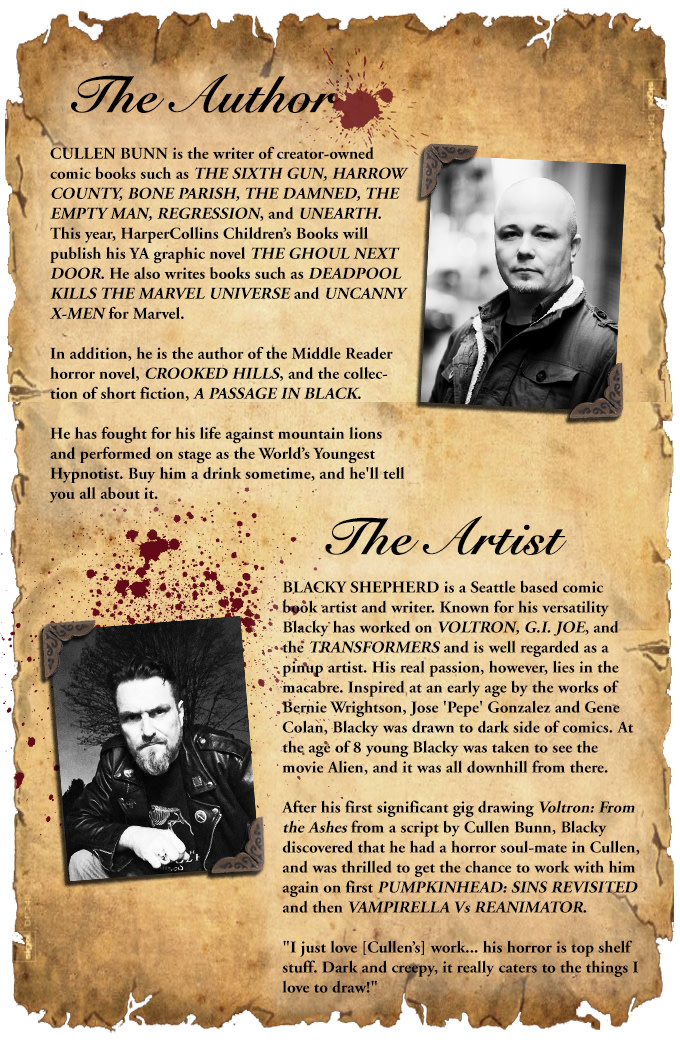 A pioneer of experimental theater in the late 1960's, Stuart Gordon will best be remembered for his contributions to our beloved horror genre. Gordon...
Read more

Horror News Network would like to congratulate Cullen Bunn, Brian Hurtt, Tyler Crook on their win for Best Mini-series of the Year: the atmospheric...
Read more