Fuller was excited about the prospects of making the 13th installment saying “This is the 13th “Friday the 13th” and on some level that’s kind of magical that we are lucky enough to make the 13th “Friday the 13th” movie. The challenges are you don’t want to alienate the people that come to see the first 12 but at the same time you don’t want your audience who haven’t seen the first 12 to feel like I’ve missed out on all of this and I’m not coming to see the 13th film.” 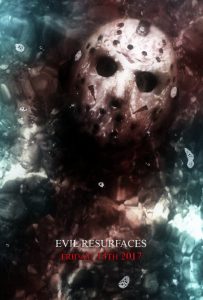 Fuller also has some lofty goals and ambitions in terms of making this film different than previous entries in the franchise.  Fuller believes “We have made plenty of Slasher movies and what excites us about this one is that our characters aren’t just meat for Jason to butcher. These are real characters which will hopefully make the bond with the audience that much stronger because you really care about the people in this film.”

Fuller and Form recently hired screen writer Aaron Guzikowski (Contraband, Prisoners) and they consider him “…an amazing writer and who saw a way to bridge those two audiences and make a way a movie where if you haven’t seen a “Friday the 13th” movie you know exactly what is going on and if you have seen one, you are going to be smiling the whole way through because there are nods to everything that you know but it is not imperative that you know those things to enjoy the film.” Hannibal and The Forest writer Nick Antosca will co-write the screenplay with Guzikowski.

There have been no other announcements regarding the director or casting choices, but there is a poster!  Stay tuned to HNN for more news as it is announced on this upcoming film.