The Halloween remake has caused quite a stir in the horror film community since being announced, unofficially, by comic actor Danny McBride (Aliens: Covenant) last February.  At the time, McBride revealed that he and David Gordon Green (Your Highness, Pineapple Express) had been contracted to co-write the script by Jason Blum and that the new movie would pick up after the events of the original 1978 film (disregarding all sequels.)  Then John Carpenter, who was attached to the project as an executive producer, revealed that the new film would take place in “sort of an alternate reality.”  Plot points have been few and far between, but this latest news on the start of production and the new cast members are a welcome sign that Halloween is progressing.

Joining the irreplaceable Jamie Lee Curtis, reprising her role as Laurie Strode, and Nick Castle, stepping into the Michael Myers killer jumpsuit once again, will be six new, fresh faces.  Andi Matichak (Replicate) can now count newcomers Ginny Gardner, Miles Robbins (My Friend Dahmer), Dylan Arnold and Drew Scheid (Stranger Things) as cast-mates in the much-anticipated reboot.  The infusion of young blood can only help the iconic franchise return to relevancy as McBride and Green (who will also direct) attempt to appeal to the millenials.

We look forward to more updates from the set of Halloween as production continues!  The film will be released by Universal Pictures on Friday, October 19, 2018. 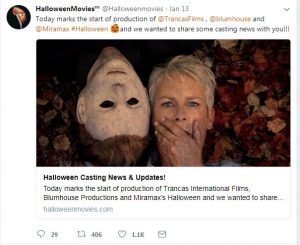