The two videos (tweets can be seen below) appear to give a quick rundown of the ill-fated Nostromo and its violent disappearance but with a bit of a twist.  The “hero” being referenced is Amanda Ripley, the daugher of the Alien films protagonist Ellen Ripley (Sigourney Weaver) and also the star of the 2014 video game released by Sega, Alien: Isolation.  While not necessarily a huge financial and critical success (or disaster), an Alien: Isolation sequel does seem to be the purpose of these teaser videos, though it’s not entirely clear.  The videos end with the cryptic crawl “Read. Play. Watch.”, with the term “play” seemingly implying that a game is what will be announced.  But then again, this theory is not spelled out explicitly so the anticipation is causing quite the uproar with Alien fans everywhere.

Yet another theory, which is still game-related, is that the Twitter videos are an unofficial announcement for the release of Alien: Blackout, an forthcoming game which was recently announced by 20th Century Fox.  Amanda Ripley, while being the star of the 2014 game, is rumored to be the focal point of the multiplayer, online-supported Alien: Blackout as well.  This would mean that the news from this weekend would not be an actual sequel to Alien: Isolation, but rather an entirely new video game venture. 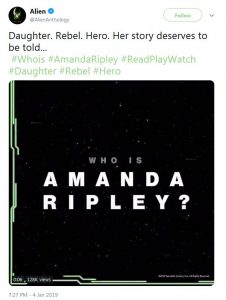 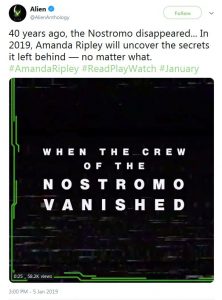 Whatever the new videos are actually heralding will be up to much debate and speculation among the fans of the franchise until the true project is declared.  When that will be is not yet known, but horror and sci-fi fans appear to have an exciting new Alien project to look forward to in 2019.  And the world can once again breath a sigh of relief now that Amanda Ripley is back to defend humanity.

Keep tuned to HNN for more information on this new Alien project as it breaks!

Staff Writer at Horror News Network
Sean McLaughlin has been writing for Horror News Network since 2012. Catch up with him on Twitter at @Makasupa and read his in-depth bio on our About Us page.
http://www.horrornewsnetwork.net/wp-content/uploads/2019/01/Alien.jpg 1025 2048 Sean McLaughlin http://www.horrornewsnetwork.net/wp-content/uploads/2016/05/HNN-logo.jpg Sean McLaughlin2019-01-07 00:28:272019-01-07 00:28:27Official Twitter Account For the 'Alien' Franchise Announces New Project
0 replies