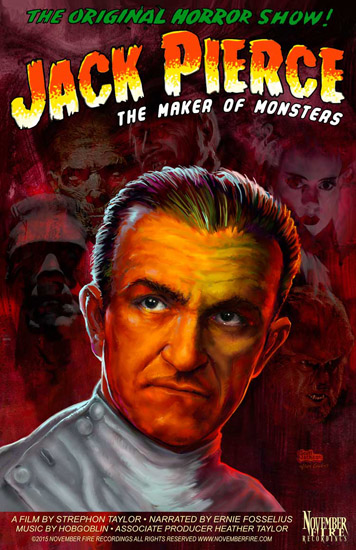 The Maker of Monsters.’ Any classic film fan, let alone the horror enthusiast, knows the Universal

monsters. Very few have a clue that most of those iconic monsters were created by one man, Jack

Pierce. We are incredibly excited about this film and are looking forward to the fans’ and media’s

In today’s cinematic world of digital effects, telling what is real from what was created in a computer is

impossible. But there was a time when Hollywood relied on nothing more than an artist’s ability to create a

boogie man with grease paint, cotton, glue, hair, and a few simple materials to draw people into the

theater to be chilled and thrilled. When we think back to these talents of the silver screen most people

think of “The Man of a Thousand Faces,” Lon Chaney. But Universal Studios had its very own Phantom

creating the world’s most memorable creatures lurking in its substages. His amazing ability to create

makeups that can still stand toe-to-toe with today’s multimillion dollar effects is worth a closer look. Jack

Pierce was the man who brought us Dracula, Frankenstein’s Monster, The Mummy, The Wolfman, Bride

of Frankenstein, and countless other monsters that have stood the test of time. Drawn from recorded

clippings we meet “The Maker of Monsters,” Jack P. Pierce. Join his journey from Greece to the budding

film industry in Los Angeles in the early 1900s to his rising star as a freelance film hand, eventually

and still love. This 82-minute documentary covers his entire career and life including the surprising hand

Pierce had in American Olympics history. Plus, all the classic monsters your heart can stand!