After spending the last few years writing for more established comics series, Scott Snyder makes a triumphant return to the darker side of comics with Nocterra.  Available on March 3rd, the comic centers around a world trapped in darkness, with the book exploring the horrors of both monsters and men. The inaugural issue of Nocterra already promises an engaging and layered story filled with action.  Horror News Network’s Christine Caprilozzi recently caught up with one of the busiest men in comics to discuss his new book.

Horror News Network: Horror comic fans know you, of course, from American Vampire and Wytches.  For the last few years though, you’ve mainly been working on more super hero type books like Batman and Justice League. How does it feel to return to the darker side of comics?

Scott Snyder: Great! I love working with DC and now with Marie Javins, whose vision is terrific, so I’m excited to see what’s to come. I’ve been eager, though, to get back to my own creations and being able to explore more of those darker elements. There’s definitely an excitement and energy with Nocterra that I feel is palpable and I hope other people feel that as well.

Horror News Network:  So, let’s talk about Nocterra. The book definitely has a post-apocalyptic, sort of Mad Max meets Dawn of the Dead feel to it. People living in this world of darkness where an infection can turn them into these monsters. What was the inspiration for the premise?

Scott Snyder: I came up with the idea maybe two to three years ago.  From a personal level it came from my own fear of the dark as a kid. I used to wake up with this acute terror about what was in the dark and it wasn’t until later in life I realized it was anxiety. Your fears when you’re anxious feel material and probable. All of these doomsday scenarios that play out in your head at night all seem real. When you have anxiety, it all feels like it’s happening right then and the dark can just exacerbate it.

A few years ago, when I saw my kid going through the same fears, it clicked that I wanted to do this story about the dark and that it IS as scary as you think it is as a kid when you’re terrorized by it. Nocterra was born in that instant. I said to myself, “what if I create a story about a darkness that envelopes the earth and it’s more terrifying than you think it is as a kid?”

Secondarily, I think the thing that gave it an energy that made it feel like it was the right thing to do right away, was the fact at that time it was right before the pandemic hit, it was of the moment already. Between 2018-2020, there was a darkness figuratively already separating us in a way where we were unrecognizable to each other and scared to come out of our silos. With the pandemic, it took on more of an urgency and more of a resonance to me and Tony both as parents and human beings.  It just felt right to do this book at this time and in this way.

Horror News Network: Nocterra centers around a young woman, who acts as a “ferryman” to transport people through this dark, dangerous, and creature infested environment where the only way to stay safe is to stay close to light. If not, they turn into one of the monsters. Is the light a metaphor for anything?

Scott Snyder:  Yes, and I don’t want to give too much away about how that unfolds in the series, but what I will say is just as the darkness has a symbolic significance, with regards to what going on. The light, not just in the immediate in which the characters have to stay lit to survive and prevent themselves from turning into shades, but the sun itself, and the world that was lost and the world that could be, all sort of come back into the picture by the end of this arc in different ways.

Horror News Network: The monsters themselves really pop out. In your collaboration with Tony Daniel for the artwork, is that an aspect he ran with? or did you have a hand in that piece?  Tell us about that creative process.

Scott Snyder: Yeah, completely, one great thing about creator owned is that it’s just you and the team making something together from scratch. Whereas when working on a title like Batman, there’s 80 years of history and design and legacy.  So, this is more about building from a blank page.  Tony is such a good world builder and getting to talk to him about the monsters and the way they kind of emerge. The goal was the create a whole ecosystem that felt like it was moving on without us. Not like a zombie thing where everything is trying to kill us, as it is more a world that is just evolving that has no place for us humans anymore, and when we interact with it, it’s dangerous for us. It’s not hunting us, it just doesn’t care about us.

All these animals are changing, mutating and mating with each other and evolving into making new species and all kinds of things that are unrecognizable to us.  So, the idea was to create this whole world in the dark where everything is becoming more alien by the moment and we humans are just left behind as remnants of a world that’s been forgotten. The designs themselves were a lot of fun to talk about with him. The creatures were meant to look scary and predatory, but also look more and more like human shades eventually.

Horror News Network: The visual aspect of Nocterra really suits the horror comic genre.  The tones are muted for the gritty feel, but pop in the action-oriented sequences.

Scott Snyder: Exactly, that’s what Tony and Tomeu (Morey) are trying to do. To their credit, trying to make a world that’s is night all the time be so colorful, especially in those action sequences is hard, so full credit to them.

Horror News Network: Because of how this all fit together, I really felt like this was created like a movie with the sequences and even how the story was laid out. Just curious if in the back of your mind, when during the writing process, if you think of how the action unfolds?

Scott Snyder: It’s hard to see it in a static way, I see it in motion as I’m writing it. The goal is to try think of the key moments, the most emotional, the most telling when it comes to the story itself, psychologically, in terms of tension, and conflict, and focus on those. So, I absolutely see it as a kinetic thing as moving in my mind when I’m imagining it like a film. Distilling that into a comic is part of the fun of the artform. What would work in a movie a sequence, in a comic may not. There’s playing with what makes a comic book scary, what makes a comic book engaging, as opposed to what makes a film. One of the great benefits that you have with horror writing for comics, you do get to leave a lot up to the imagination sometimes with what’s not on panel for a long time. Here keeping the human shades off panel, there is a build up to the scariest creatures. For comics, like Wytches and Nocterra, there’s a kind of restraint that makes is spookier.

Horror News Network: I would be remiss in terms of not mentioning the slew of very cool variant covers for all the comic collectors out there. Not to put you on the spot, but do you have a favorite?

Scott Snyder: Oh man, having one from Greg Capullo who has been like my brother in arms for like the last 10 years is a thrill, but honestly all the other artists, everybody brought their “A” game and really knocked it out of the park.  The whole thing was a blast and we really lucked out with variant covers. I couldn’t be happier with the whole slate.

Horror News Network: The book is being published by Image, but is the first from your own publishing imprint, Best Jacket Press. After working with several publishers over the years, was there a desire to have complete creative control? How does that affect your writing and creative process?

Scott Snyder: Yes, it’s complete freedom.  I love DC, Image and all the places I’ve been, but the freedom of being able to make books with friends and creators and then decide where to place them, if they’ll want us, is just a whole different level of freedom. With Nocterra, Tony and I developed the book together and thought about his art and whether we were going to do a graphic novel or monthly. All those types of decisions are now yours without being committed to a publisher. It allows you to take real control and all of the decisions become creative when you have the ability to weigh on them, they have an effect on the way you make the book. It can create new exciting avenues for you to drive.  I love it and we have a whole slate of books we’re going to be announcing over the next year. There are about eight or nine books from scripts I have from over the years. 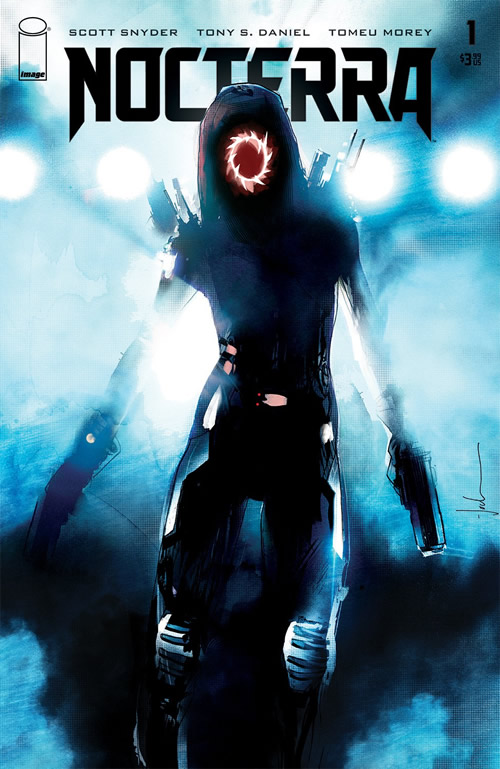 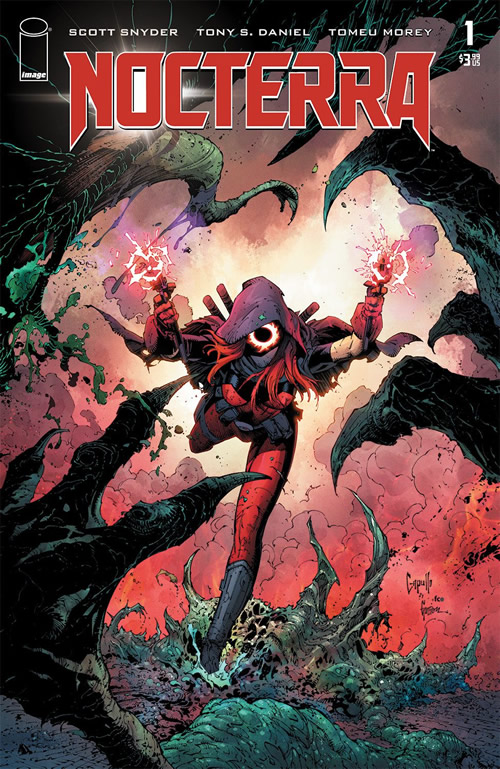 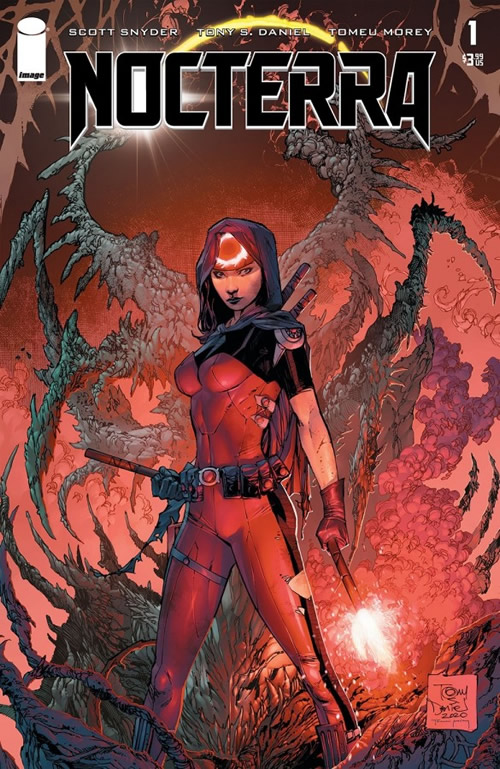 Horror News Network: Thanks Scott! Nocterra will be available in comic stores on March 3rd.

The classic tale of Count Dracula is getting a new graphic novel treatment by gong back to the past. And just in time for Halloween. Alex De Campi (Archie vs. Predator) and Erica Henderson (Assassin Nation, Squirrel Girl) have teamed up to create 2020: Dracula: Motherf**ker for Image Comics. Described as "taking place in...

If one were to ask any comic fan the following question:  "Name a pulp-noir monster hero that combined suspense and hard-boiled action with a...

Free Comic Book Day rolls around every first Saturday in May and it is a time for both fans and retailers to celebrate.  The...