Helen Mullane’s debut graphic novel Nicnevin and the Bloody Queen carefully walks the line between realism and folk horror in a way that only the best horror stories do.  Mullane’s unique take on the folklore and mythology of Great Britain, told through the eyes of a disaffected teen, slowly works its way towards an explosive ending with many terrifying sign posts along the way.

The fact that this original tale from the legendary Humanoids imprint (the French comic company founded by Moebius in the 1970’s, best known for publishing the precursor to Heavy Metal Magazine, Metal Hurlant) landed just in time for their own revitalization is perfect timing for a new vision and direction for the company, including a place for horror next to their renowned Sci-Fi stories.

Mullane was gracious enough to answer some questions about her work and what it was like to transition from the world of film to graphic storytelling in this exclusive interview.

Horror News Network: Where did the idea for Nicnevin and the Bloody Queen come from?

Helen Mullane: Nicnevin and the Bloody Queen came out of a mood and an atmosphere in horror I really love.  I was inspired by wonderful 70s movies like The Wicker Man and Penda’s Fen, and creepy kids TV like Children of the Stones.  This one particular novel and TV show called The Owl Service by Alan Garner made me want to hang my story off of a set of real places and myths to try to give a fantastical tale a very real weight.

I like how the teen experience is portrayed in that era, as more nuanced than it sometimes seems now.  There’s this incredibly strange movie called I Start Counting starring Jenny Agutter in which the main protagonist has a crush who might be a killer but she doesn’t massively care, she just wants to follow him round making doe eyes. That concept really stuck with me, it felt oddly real.

In short, it came from a real myriad of influences!  But in writing the story I really wanted it to make something that felt fresh and modern, rather than simply do a cover version of things that have gone before. So this is a story of a young girl forced to go to the country for the summer where she gets mixed up in a tale of myth and magic, so the tropes are familiar, but at the same time I hope they’re explored in a way we haven’t seen before.

HNN: Nissy comes across as a real teen in the story, in a much more realistic fashion than most teen characters in these types of stories.  Why was it important to you to construct her personality in this way?  How does her attitude help tell this story?

Mullane: It was very important to me that Nissy should feel like a real teen.  I wanted to write about a girl who felt real and familiar to me, and a sparky problem solver who just wants to solve mysteries and help her mum with gardening just doesn’t feel like any 15 year old I know.  Certainly my own teen experience was characterised by studied carelessness and reckless experience chasing.

Beyond wanting to write someone who it felt like I knew, Nissy’s disinterest in what’s going on around her is a cornerstone of the story.  Her selfishness allows her to sleepwalk into danger and ultimately make some truly regrettable mistakes.  Her lack of compassion for those around her leads to ongoing tensions between her and her mother, and that’s a dynamic I was eager to explore.

HNN: How would you compare the creative process involved in film making to the creation of a graphic novel?

Mullane: In many ways, the process is very different because you’re not subject to the same limitations when you’re developing a comic as you are in film.  You don’t have to think about budget or casting or any of those things that limit the possibilities in filmmaking.

But on the other hand both mediums require you follow some similar golden rules in order to work well, for example a big one I believe in is “show don’t tell”.  But of course the story is only going to be as strong as the art, and I was incredibly lucky to be collaborating with Dom and later Matthew, who have the skill to communicate the action and feeling of the script with minimal explanation.

HNN: Again, speaking of your background in film making, a lot of the story is told through visuals, lacking traditional speech bubble and such in many of the panels.  How much direction did you give to Dom Reardon and Matthew Dow Smith in these cases?  What was it like working with both?

Mullane: It was wonderful working with Dom and Matthew.  They are both such talents and this book could never work without their skill and creativity.  In some ways my scripts had a lot of direction and in others very little.  For the most part I didn’t write panel breakdowns, and the artists laid out the pages as they saw fit.  I would rather describe in detail what happened on the page, the setting and action and all that.

When Dom and I started the project, we imagined the dialogue and narrative insets as being even more minimal, so the book was mostly silent.  In reality that threw off the pacing, the whole thing just read much too fast so once we realized that I went back and wrote a whole set of new voices to make sure that the reader’s eyes would linger longer on each page and give us that slow burn we were looking for.

Then Lee’s colours were a huge part of evoking that moody, misty atmosphere.  He had to make it feel dark but not murky, and make sure the mundane and fantasy world fit together.  No small ask!  Then it fell to Robin who lettered the book to make sure that all these different voices and forms of speech that exist in the book were clearly defined.  Also not an easy task! 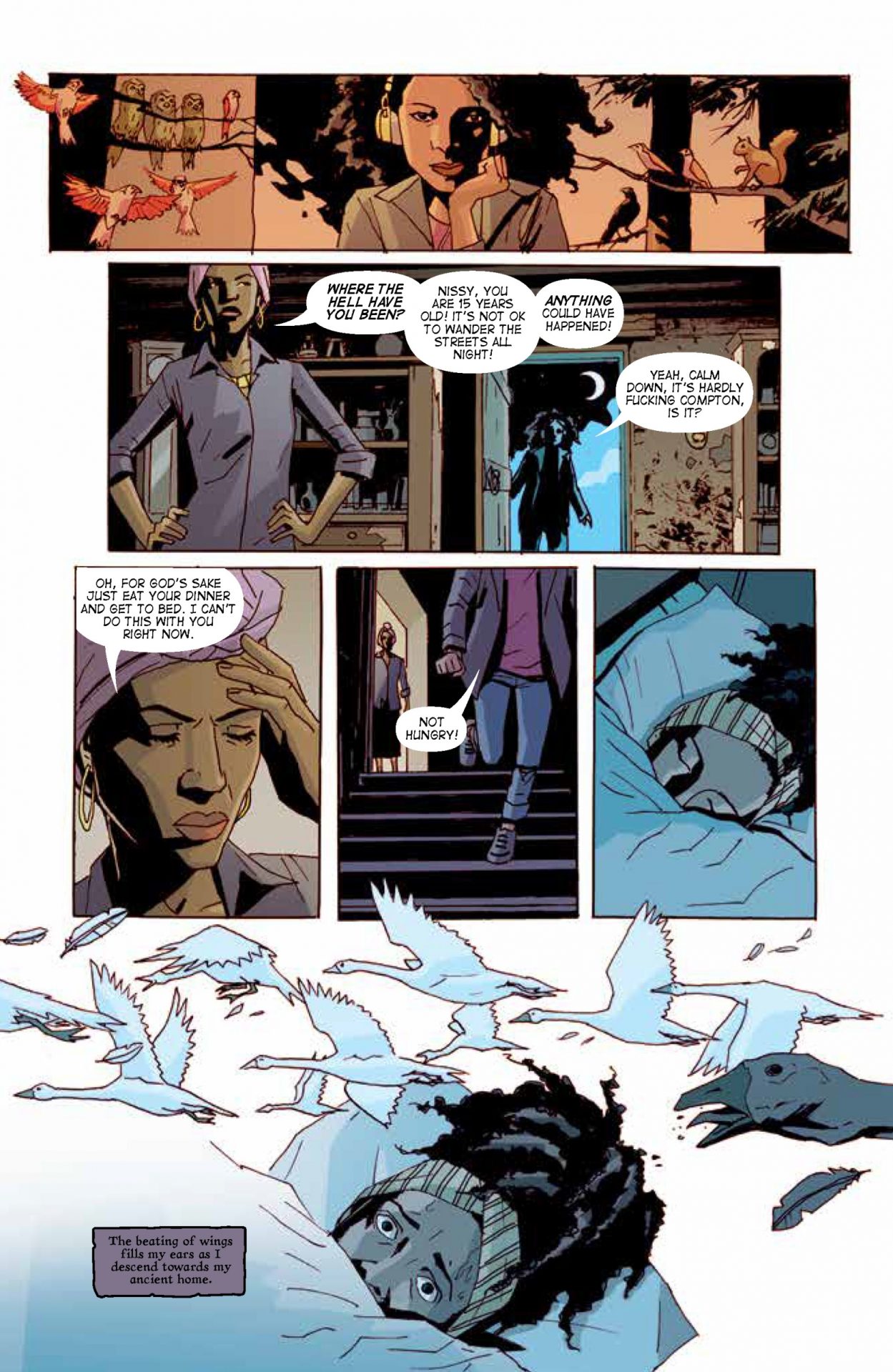 HNN: Reviewers have often mentioned the British folk traditions and myths that are the foundation of the story.  How much of this material was research-based and what makes Nicnevin follow in the tradition of British folk horror tales?

Mullane: The material was hugely research based.  I really love it when fantasy is based enough in reality that it feels only a hop skip and a jump from being real.  I went through so many myths and locations before I settled on these Northumberland hill forts.  There’s a poem in the book, “The Ballad of True Thomas”, and not only is that a real border ballad, but the story within it was really said to take place at the exact location where a character is telling it.  Even the form that the sacrifices take is based on the famous Lindow Man bog body.  I’d love it if someone became interested in this fascinating history and folklore through reading this book.

I guess it’s this connection to folklore, but also the use of the classic “kid leaves the city and lives somewhere remote” trope that places this story squarely in the world of folk horror.

HNN: You carefully, and honestly, deal with Nissy’s relationship with Reggie.  Was this material difficult to navigate as a writer?

Mullane: Of course it’s important to be sensitive when you’re dealing with attraction across such a huge age gap, and that’s something I was very aware of.  I think there’s some moments in the book many people will find uncomfortable. But like most things when I was writing Nissy, I channeled my own teen experiences and feelings into her story, and her attraction to Reggie is an important part of that.  I was writing from her perspective and the material felt true to me.

I think we spend a lot of time in our culture sexualizing teenage girls, which most people rightly find gross.  Then because there is this gross narrative we’re trying to defend against, we over correct and try to imagine that sexuality isn’t there at all, which is of course nonsense.  Just like teen boys, teen girls are insane hotbeds of hormones and whatnot, feeling feelings probably more intensely than they ever will again.  And there’s another aspect to this which I remember vividly and find fascinating, that moment when you discover the power of being a teen girl.  How this new aspect of yourself creates an off kilter destabilizing effect in the world around you.

HNN: Nicnevin is being published by Humanoids, a legendary home for creator-driven comic stories.  How do you feel about your work being displayed under their banner?

Mullane: I am so excited to be part of the Humanoids roster!  This is a publisher that was started by Moebius, one of the most iconic artists of all time, and they publish Jodorowsky!  I think “we’re on the same label as Jodorowsky” has been my most uttered statement over the last year or so.  I am so grateful to Alex and the whole Humanoids team for taking a chance on us – even though the most of the crew is very experienced it’s not nothing making such an investment in a first time writer.

Mullane: One of my best friends is a prolific novelist and he gave me the best advice some years ago, “a writer writes.”  So simple and so true.  With that in mind, I’m working on a few comics at the moment, pitching them out and hoping that someone picks up what I’m putting down.  I’m also working on a short film with a good friend of mine which is very creepy and fun.  I hope to be able to share more soon.

Nicnevin and the Bloody Queen is currently available at finer comic book shops and bookstores everywhere. 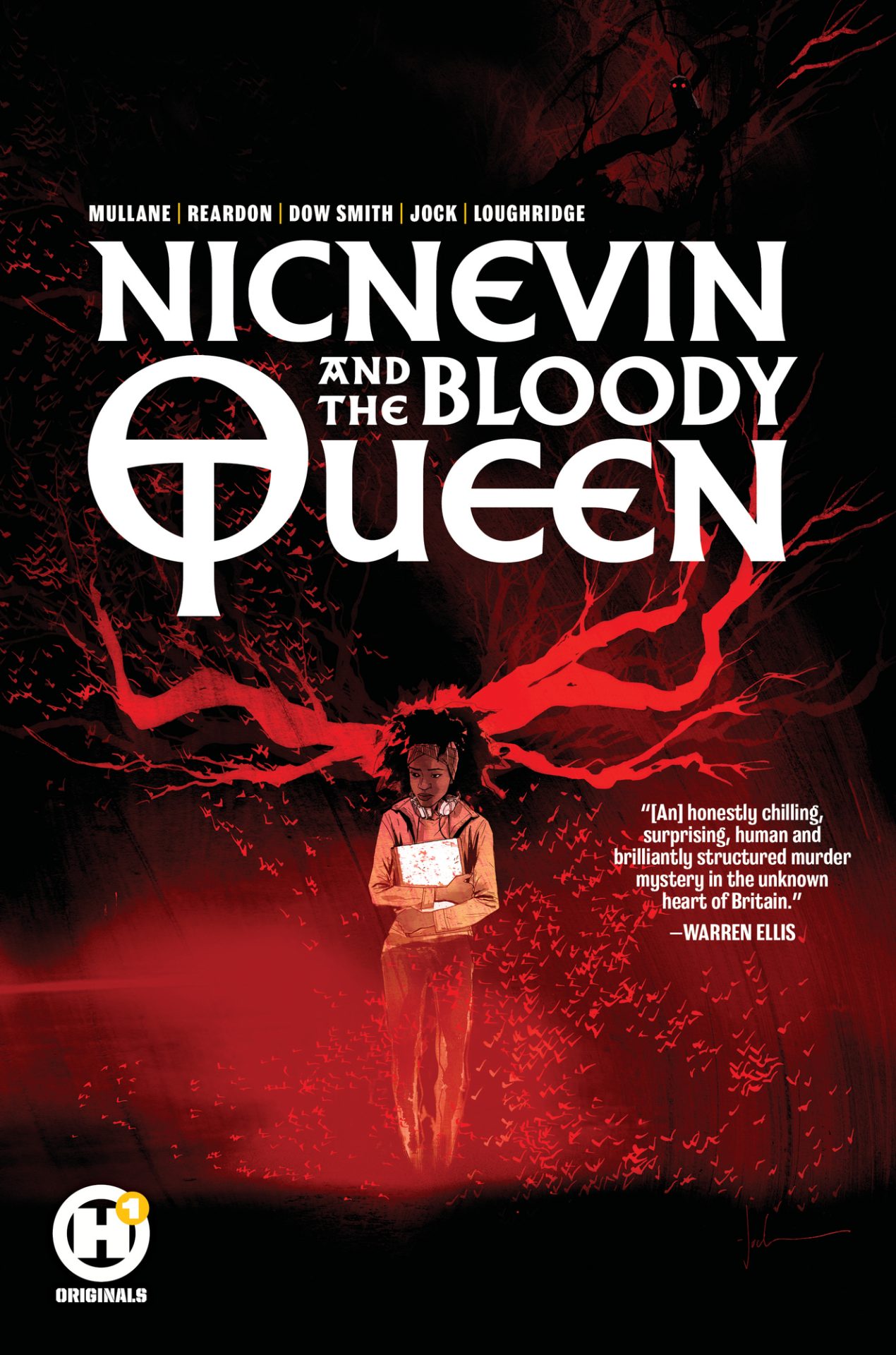 Staff Writer at Horror News Network
Nick joined the website in 2015. His lifelong love of comics and horror began with Universal Monsters and the Incredible Hulk. He has fond memories of going to Waldbaum’s supermarket with his mother and being rewarded with a 3-pack of sealed comics. It’s been all downhill from there… Since those early days, his life has been immersed in four color action and scares on the silver screen.
http://www.horrornewsnetwork.net/wp-content/uploads/2020/03/HelenMullane-scaled.jpeg 2560 1920 Nick Banks http://www.horrornewsnetwork.net/wp-content/uploads/2016/05/HNN-logo.jpg Nick Banks2020-03-10 23:08:042020-03-10 23:08:04'Nicnevin and the Bloody Queen' Writer Helen Mullane: The Horror News Network Interview
0 replies

HBO Reveals Trailer for ‘The Third Day’
Scroll to top