Try to bear with me on this one, folks, as it may get a bit confusing. Back in 1988, Michael Myers came back to the big screen after a 7-year hiatus. Last seen burning to death in the halls of Haddonfield Memorial Hospital in 1981’s Halloween 2, Halloween 4: The Return of Michael Myers told us that Michael actually survived being shot in the face a few times and getting burnt to a crisp. Also in H4, we learned of the passing of Laurie Strode and are introduced to her daughter Jamie Lloyd (Danielle Harris).

By H6, the Jamie Lloyd story was all wrapped up as she was dispatched by Uncle Michael (or Thorn depending on which version you’re watching…don’t ask). Three years later came Halloween H20 and, ta-da, Laurie Strode is back. Well, not really back…H20 asked fans to disregard H4 – H6 and take it as a direct sequel to H2; are you still with me? So H20 brought Laurie Strode back into the mix and then in the next (and last) film, Halloween: Resurrection, Laurie is killed by her brother.

Now 15 years after the second death of Laurie Strode, she’s apparently coming back again for the 2018 Halloween film and will be played again by Jamie Lee Curtis. In an interview with Stereogum, John Carpenter revealed that the new Halloween will take place “in an alternative reality. It picks up after the first one and it pretends that none of the other [sequels] were made. It’s gonna be fun. There’s a really talented director and it was well-written. I’m impressed.”

So there you have it. According to the man himself, the Danny McBride-written Halloween will bring Laurie Strode back to life (again) to square off with brother Michael (again). The film also asks us to ignore all but one of the previous films. So confusing.

Let’s all hope that she doesn’t die for a third time as I’m sure that it would be hard for Hollywood to bring her back to life again…maybe. 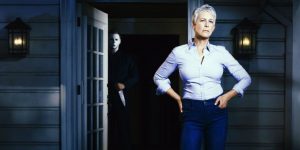 Michael is back and he looks pissed. Empire revealed a new image from Halloween Kills featuring Michael Myers walking about of, presumably, Laurie Strode’s...
Read more

He's coming...and he looks upset. That would be Michael Myers in a new photo--from the upcoming Halloween Kills--that was released this week courtesy of Total Film, as...
Read more