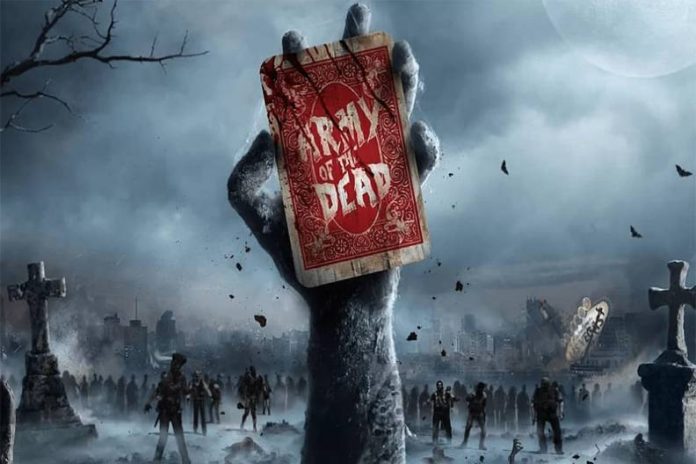 Though Zack Snyder’s upcoming zombie flick Army of the Dead doesn’t hit Netflix until next year, the streaming service is already rolling the dice on its success.  According to Deadline, Netflix has quickly given the green-light to both a cinematic prequel, as well as an animated spin-off series.  It seems the undead is still a very valuable property in the entertainment world.

Written and directed by Snyder, Army of the Dead will tell the tale of a team of mercenaries who venture into Las Vegas after a zombie outbreak, looking to pull off the greatest heist ever attempted.  The flick is set to debut on Netflix sometime “next year”, and boasts an impressive cast of international draws such as Dave Bautista (Guardians of the Galaxy), Matthias Schweighöfer (Resistance), Theo Rossi (Sons of Anarchy), Hiroyuki Sanada (The Wolverine) and Tig Notaro (Star Trek: Discovery).  The plans for side projects is an ambitious gamble, as the zombie genre itself has been very well-traveled territory on both the big and small screens for the better part of the last decade.

First up is the prequel, which will be directed and starring Schweighöfer and will follow his character Ludwig Dieter.  Snyder is attached as one of the producers (along with The Stone Quarry and Pantaleon Films), and will be written by Shay Hatten (who also co-wrote Army.)  Production is set to begin in Germany, signaling that this will be an international feature.

The anime series will also be written by Hatten, and will be titled Army of the Dead:  Lost Vegas.  Bautista’s character Scott will be the focus of this project, as his rescue team comes face-to-face with the undead in Vegas.  Snyder will direct two episodes, as will Jay Oliva, and most of the original film’s cast is set to lend their voices to the action.  No timetable has yet been unveiled for the animated series or the prequel at this time.

In a press release quote, Snyder seems very satisfied with the upcoming projects connected to Army.  “I’m incredibly excited for the opportunity to partner with Netflix again as we expand the Army of the Dead universe with both an international prequel, as well as exploring the visually dynamic world of animation,” Snyder said.  “It’s been a great collaboration and we are thrilled that Netflix sees this as big of an IP as we do.”

While most people are waiting for the 2021 release of Zack Snyder’s Justice League on HBO Max, where the director will attempt to resurrect a fatally-flawed superhero film, Netflix is banking on Snyder’s magic touch with zombies as well.

Stay tuned to HNN for news on all projects related to Army of the Dead as it breaks!

Castlevania--the Netflix animated series based on the Konami video game franchise--will pull up stakes (pun intended) with its fourth and final season that starts...

The news from Zack Snyder's camp is in non-stop mode. Just yesterday, Horror News Network unveiled the trailer for Snyder's Army of the Dead zombie heist thriller--set to debut on...

The dead will walk again--thanks to Zack Snyder and Netflix. From super-heroes (his recent Zack Snyder's Justice League remake) to zombies, few genre filmmakers can get fans salivating quite like...