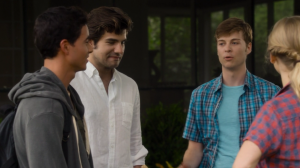 The MTV Scream television series’ days are numbered. While the second season was arguably more watchable than the first season, it still wasn’t great (for every clever concept, like the “school lockdown” episode, there was something nearly unwatchable like the psychedelic never ending house party). The dip in ratings along with the radio silence about upcoming content led to rampant speculation about the fate of the series. When the Halloween Special was announced, some news sources mistakenly reported that the series would be finished after the special aired. Now that we know that Season Three will consist of just six final episodes, the revolving door of showrunners have been tasked with quickly wrapping up a series that never quite got off the ground.

While the show has some interesting moments and some genuinely likeable characters, most of its content barely resembles what viewers expect from the Scream franchise. Frantic, jumpy, accident-prone Ghostface has been replaced by a variety of all-powerful, all-controlling forces who never make mistakes and never make complete sense. The show has been building towards a major plot reveal involving the misunderstood Brandon James of yesteryear, but by the end of Season Two it still hasn’t been addressed. With a Halloween Special and six more episodes to go, now would be a good time to stop creating tangential storylines and to start addressing the big mysteries of the show, right?

As you can see from the trailer, the producers decided that now was a good time for the gang to go on an unexpected vacation to a mysterious island during the stormy off-season to learn about a legendary killer who has never before been mentioned in the show. Oh, and Brandon James might be involved too?

1998’s I Still Know What You Did Last Summer made the first movie from 1997 look like a Kubrick film by comparison. Sloppy writing, silly one-dimensional characters, and the tropical flare of a mysterious island all contributed to a mutant Beverly Hills, 90210 / Scooby Doo hybrid that could possibly contain the worst Jack Black performance of all time. Some might consider I Know What You Did Last Summer to be a guilty pleasure that’s worth a watch every once in awhile… but I Still Know What You Did Last Summer is the kind of movie you should feel guilty about owning in your collection. So, did the people behind the Scream Halloween Special intentionally copy this story format, or did they accidentally fall into the same trap as that other Scream rip off? The world may never know…

The mysteries surrounding the production and airing of this show sometimes generate more discussion and speculation than the content of the show itself. Early information on Season Two suggested that it was going to consist of fourteen episodes. When this number was eventually cut back to twelve, some thought that the Halloween episode would consist of two hours of content that was originally meant to conclude the season. After watching the episode, I really can’t tell what the plans were. On one hand there are a handful of references to Halloween and new characters. On the other hand, there really isn’t anything particular about this episode that made it feel exclusively Halloween-ey.

Despite the clichéd format of the story, which prevents the characters from making any progress in furthering the overall mythology of the series, the episode delivers an overall watchable experience. Because the story is self-contained to a span of a double episode, there is a level of instant gratification that hasn’t been a part of the series so far. For better or for worse, the killer is revealed and the story is all wrapped up before the credits roll. Some of the final scenes seem strangely similar to the conclusion of Scream 3, which also takes place in a mysterious mansion. It’s not a good sign that the show is taking its cues from the weakest link in the original film series, as there is still so much content from the legendary Wes Craven/Kevin Williamson franchise that has yet to be explored. 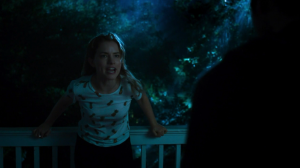 One element of the story that did seem to really get things right is the way that Willa Fitzgerald’s Emma Duval has finally taken on some of the brave characteristics of Neve Campbell’s Sidney Prescott. After two seasons of standing around and being nervous, Emma is finally given some scenes where we get to see her really fight back for once and take control of the situation. It’s too bad this didn’t happen earlier on the show.

The rest of the returning cast stay true to their characters. Viewers who love John Karna’s Noah, Bex Taylor-Klaus’ Audrey, and Carlson Young’s Brooke will find several scenes to enjoy… even if there isn’t any meaningful character development in this episode. Newcomers Zena Grey (Gina), Alex Esola (Jeremy), and Alexander Calvert (Alex) don’t do anything particularly interesting with their new roles in the series. With that said, most of the actors aren’t really given anything to work with in the script. One particularly unusual segment involves all of the characters calmly discussing their relationship troubles immediately after the carnage of the climax begins to ramp up.

This Halloween episode wasn’t very full of the Samhain spirit, and the series isn’t getting any closer to revealing the secrets it has promised long ago. But if you’re still watching the Scream television series at this point, there’s nothing in this episode that’s going to get you to stop watching. I’ve made it this far, so I might as well go down with the ship with just six episodes remaining. I just hope it doesn’t turn out to be the same ship from the end of I Know What You Did Last Summer…

Staff Writer at Horror News Network
John has loved movie monsters for as far back as he can remember. He's since collected up as many comics, statues, and autographed material related to movies and music that he can get his hands on. He is particularly interested in the critical and analytical discussion of the best stories the horror genre has to offer. One of his largest works on the topic is a study on the portrayals of people with disabilities in horror films.
http://www.horrornewsnetwork.net/wp-content/uploads/2016/10/scream-halloween1.png 646 1145 John Evans http://www.horrornewsnetwork.net/wp-content/uploads/2016/05/HNN-logo.jpg John Evans2016-10-20 02:24:532016-10-20 02:32:41MTV's Scream: The TV Series Halloween Special Review
0 replies