Just in time for Halloween, Mike Mignola and Warwick Johnson-Cadwell have cooked up a delicious original graphic novel treat for all fans of classic Universal and Hammer horror films entitled Mr. Higgins Comes Home. Horror News Network had the pleasure of speaking to artist Warwick Johnson-Cadwell and he discussed his unique style, monster movies, and “sad werewolves”.

Horror News Network: How did you become involved with Mr. Higgins?

Warwick Johnson-Cadwell: Mike and I were on a Sketch Panel at the UK’s Thought Bubble Festival and we got the chance to briefly chat and he suggested we might work on something together. He is such a hero of mine; I dared not think that would turn out the way it did. He got back in touch with this idea he had and I was amazed, then Scott Allie got in touch too and slowly it started to become an actual reality. I would get physical pangs of excitement while working on the pages and I still find it hard to believe even though the book is (about to be) on the shelf now. I cannot thank Mike, Scott and Dark Horse enough.

HNN: Mike Mignola has said that you have an affinity for “sad werewolves”. Can you explain why? Origins?

Johnson-Cadwell: Werewolves are classic, dangerous, maniac monsters, but they revert to human form. Not always good I grant you, but certainly in the Universal Monsters tradition the human side is remorseful and horrified by their actions. Greater torment comes with the fact they may not be able to cure the curse or even do themselves in. It makes for a great tragic hero I guess.

HNN: Your art style if very unique and has an almost “children’s book illustrator” type of sensibility. How did your art style lend itself to this quirky vampire tale?

Johnson-Cadwell: We headed into familiar territory for Horror fans here and we were going to be dealing with a lot of classic and recognizable elements. I hope that the art style brings a fresh representation of these tropes.

HNN: You are most known for sci-fi stories with Helena Crash and Tank Girl. How did you enjoy working on a horror story?

Johnson-Cadwell: I loved it. There are similarities in the respect that they are fantasy stories and you can wander away from the ‘real’ and really go to town (and that’s a pretty crazy town in Helena Crash) trying to do something different. Mr Higgins is rooted in the classic horror genre so I was very interesting to try and draw a world that people might recognize as old school horror.

HNN: Fans can certainly detect Hammer references throughout Mr. Higgins. Was Hammer a major inspiration for the story?

Johnson-Cadwell: Totally. These are the horror films I grew up watching; they were the most available to me as a youngster and they often were the first films that scared or revolted me (to my great delight). Part of the weirdness were the special effects too, what looks odd or obvious in these movies nowadays, like the crimson gloop for blood or the waxy prosthetic attachments, were a lot of what unsettled me as a youngster. In my mind, the setting for a lot of horror when reading stories or comics where those Hammer settings. 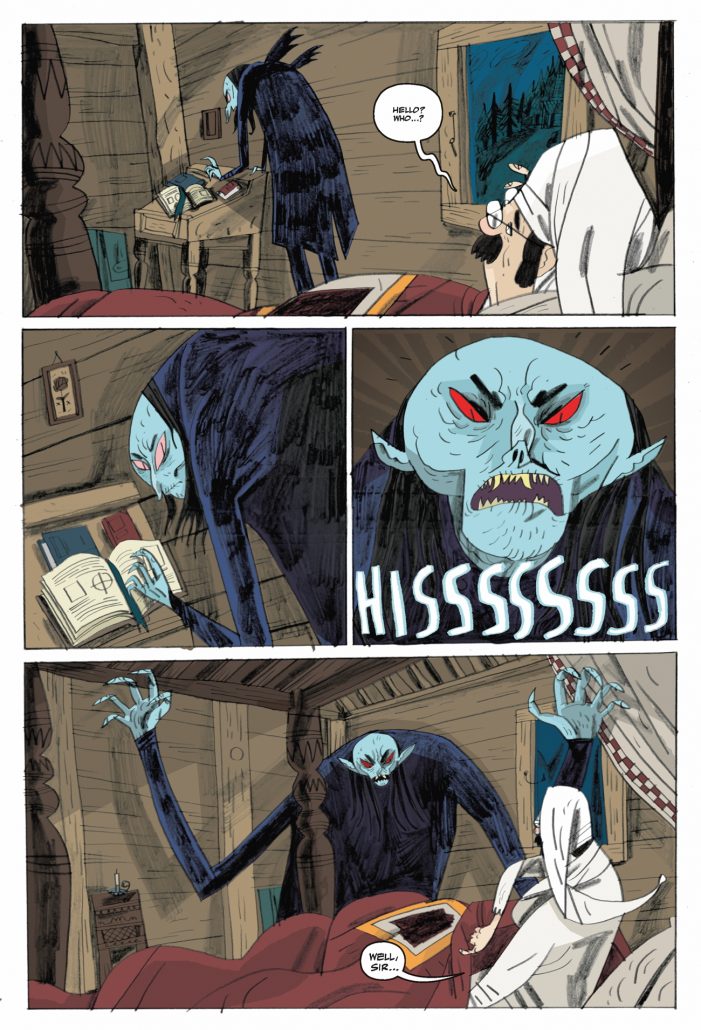 HNN: Do you think there is room for classic vampire characters (with all of the well-loved tropes) on a modern horror landscape?

Johnson-Cadwell: Oh I think so. I like my vampires as proper forces of evil. They don’t need to be wrestling with their good side or mortality (leave that to the werewolves) they are bent on wrong doing and ruin and, as such, are excellent characters for horror. If you want to include the cape and fangs or garlic and wafers you can, but at the core they are just evil.

HNN: You have also produced monster and horror art for Mondo. Any pieces that stand out in your work for the company?

Johnson-Cadwell: They put on an EC Comics show and I made a up couple of comic cover pieces. Great gruesome stuff.

HNN: You took great care to fully create the interiors of Count Golga’s castle. How did you approach “decorating” his home?

Johnson-Cadwell: My work had been focussed on figures and characters in the main, but a recent trip abroad started me drawing landscapes and settings from life (medieval Spanish towns). This changed how I planned and framed a drawing, making the scenery as much a character itself instead of just a frame for the characters. Decorating it was fantastic fun, trying to offer a fairly normal environment at first glance that can be explored to reveal a much weirder side.

HNN: Any projects that you are currently working on? Future projects?

Staff Writer at Horror News Network
Nick joined the website in 2015. His lifelong love of comics and horror began with Universal Monsters and the Incredible Hulk. He has fond memories of going to Waldbaum’s supermarket with his mother and being rewarded with a 3-pack of sealed comics. It’s been all downhill from there… Since those early days, his life has been immersed in four color action and scares on the silver screen.
http://www.horrornewsnetwork.net/wp-content/uploads/2017/10/mr-higgins-comes-home-resim.jpg 419 800 Nick Banks http://www.horrornewsnetwork.net/wp-content/uploads/2016/05/HNN-logo.jpg Nick Banks2017-10-12 18:23:482017-10-12 19:30:12'Mr. Higgins Comes Home' Artist Warwick Johnson-Cadwell: The Horror News Network Interview
0 replies

‘The Strangers’ Sequel ‘Prey at Night’ Scheduled for...