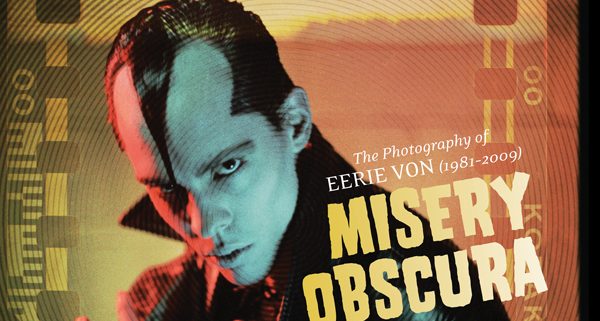 With over 35 years in the music business, over some of the most exciting eras in rock music, Eerie Von is a man who is near and dear to fans of punk, goth, metal, and horror-inspired music.  What fans may not know is that Eerie Von is also an accomplished photographer. Through his new book, Misery Obscura: The Photography of Eerie Von (1981-2009), Eerie has given fans a back stage pass into the origins of the Misfits, the rise of Samhain, and the formation and world-wide success of Danzig. The Horror News Network was lucky enough to get a chance to talk to Eerie about the origins of the book, his musical journey, and of course, horror films.

Horror News Network: How did you first become interested in photography and how did it lead to your role as The Misfits “official photographer”?

Eerie Von: My grandmother brought a camera back from Japan when I was young and when I would go on vacations with my family I was always interested in taking pictures, and as a teenager, my dad started passing it off to me and showed me how to use it.  He definetly encouraged my interest and built me a dark room in the house.  From there, I also got interested in graphic design and took a lot of art classes.

As far as the Misfits, we all went to the same high school in New Jersey (Lodi High School), and the guys knew I was into photography so Doyle asked me if I wanted to take some pictures of the band some time.  We set up a time on the weekend to do it, but the dates got screwed up and one day I was going out to play basketball at the park and the band drove up to the court and said “You’re supposed to be shooting us today!”  I then raced home on my bike, got my two cameras, and we went to the caves where they wanted to do the photo shoot, somewhere in Northern Jersey or upstate New York. The shoot went really well, Glenn liked them, and one of the photos was almost used as the cover for Walk Among Us, but they did use six of the photos from the shoot eventually.  From that point, I would go to all of the shows and continued to take photos of the band.

HNN: You mention in the book that you really enjoyed your high school experience.  What made it such a memorable time of your life?

Eerie Von: It was great.  You don’t realize it until later in life, but being able to go to school, see your friends every day, play sports, not worry about working a job or paying rent…it was a lot of fun.  My favorite teacher was an art teacher and he taught me how to make t-shirts and I would eventually start making them for the band.

HNN:  Were you always a horror fan?

Eerie Von: Yes.  I was born in 1964 and there was a huge resurgence in classic Universal Monsters at that time  You could watch them late at night on Chiller Theater, buy the model kits, etc.  Glenn (Danzig) was also into horror and comic books.   I liked the cinematography of the old monster films and the look reminded me of the photography of George Hurrell with great shadows and high contrast which I tried to do with own photography.

HNN: How did you become involved in the growing punk scene?

Eerie Von:  It was the birth of punk in 1977 and I was a freshman along with Doyle in 1978.  It started slowly, but you would start to see a kid with spiky hair or hear something about the Sex Pistols.  My sister turned me on to the Clash.  You would then discover a bigger world if you were hooked by it.  It helped that the Misfits were from my high school.  I remember seeing a Misfits Halloween show in New York at Irving Plaza when I was 15, which was also Doyle’s first show with the band.  “Screaming” Jay Hawkins opened for them.  It was a real event.

After they would play shows, I’d see Doyle in school at the water fountain and we’d talk about the show the previous night.  It was cool to see your friends on stage and doing well.

HNN: When the Misfits broke up, you ended up becoming the bassist for Samhain. How did this come about?

Eerie Von: Samhain was from the very start a big deal as it was supposed to be this punk “super group” with members of the Misfits and Minor Threat forming a new band.  The band needed a bass player so Glenn asked me if I wanted to play bass.  I had thirty days to learn how to play bass, so I went to a local music store, picked one out, and started playing.  We played our first show at the Rock Hotel in New York and about 1,000 people showed up.  I had never played in front of that many people in my life, but I knew that it was where I was supposed to be.

HNN: Many fans discovered the band through the infamous blood-soaked album cover for Initium.  Was this a calculated move to stand out from other bands?

Eerie Von: Yes, we wanted people to stop when they were flipping through the stacks at the record store.  Glenn always said that this was how he found the first Black Sabbath record, being drawn in by the album cover.

HNN:  You would later use the blood on-stage for two memorable performances, right?

Eerie Von:  The first time we used the blood on-stage was at the Metro in Chicago.  We wanted to get real pig’s blood from the slaughter houses Chicago is famous for and set it up Carrie-style so buckets would dump on us on stage, but the owner of the club said “No way.”  So instead, we made up a batch of Hollywood blood and came out covered in the sticky blood.  The crowd went nuts.  That was the first time a band ever did anything like that on stage.

We used the blood again at The Ritz in New York for an encore.  Rick Rubin was at the show and loved it and it lead directly to the start of Danzig.

HNN: The Misfits, Samhain, and Danzig have always had a connection to Metallica.  Do you think that fans discovered the bands through Metallica to some extent?

Eerie Von: We were always friends with Metallica.  I remember going to see them at Nassau Coliseum on Long Island when they opened for Ozzy and you knew they were going to be a big band.

I actually made Misfits t-shirts just for them to wear.  I also made James Hetfield his first pair of Misfits wristbands.  As they became more famous, they were helpful and would recommend a good lawyer or manager to you.  It is always fun to to see your friends succeed and we were proud of them.

HNN: Was it a tough transition for you going from the world of punk rock to playing arenas with Danzig?  Were some of the original Misfits and Samhain fans resentful of the changes?

Eerie Von: There was some fan backlash after the live “Mother” video became a hit on MTV, primaily from the punk rock kids.  Seeing a football player in your school wearing a Danzig shirt bothered some of them.  We expected to lose a lot of fans when Samhain transitioned to Danzig.  Some fans want you to stay small, so you are always “their” band.  We wanted to grow as a band.  You can stand still if you want to, but we wanted to play to the big crowds and play for the most people.

HNN: Do you have a particular show that stands out to you from that era?

Eerie Von: One of my favorites was at Irving Meadows on Halloween night with White Zombie.  We played in front of 13,000 fans and they were lighting fires on the lawn, dancing around them, breaking the barricades.  I remember saying to myself: “You better remember this moment”.

HNN: What are your memories of working with famed artist H.R. Geiger?

Eerie Von: Glenn was really into Giger and Giger did a new painting for us for with the Danzig logo and a dagger.  We went to Switzerland and met with him and got a private tour of his house.  He was quiet.  He signed my cover of Danzig III: How the God’s Kill.

HNN: Did you feel that you were able to serve as mentor to the younger bands that you toured with in the 1990’s?

Eerie Von:  I was ten years younger than most of the guys in the bands we toured with such as Marilyn Manson, White Zombie, and Kyuss (who would eventually go on to become The Queens of the Stone Age).  It’s not easy when you are starting out. I remember that Kyuss didn’t have a sound man and I offered our sound man to them. When we toured with White Zombie they had no spotlight and I told Rob that I would pay for it if they wanted it.  They also had no food on the tour and we had ours that was provided for us and I would say “Can’t we give them soup?”

Marilyn and Twiggy would talk to me about what it was like to see Bauhaus and Minor Threat as a kid.  There was healthy competition between us and the newer bands.

HNN: Do you have any upcoming projects that you are working on?

Eerie Von: I’m working on a second photo book that is just photos.  The first book was a combination of photos and “the story” of the photos and bands and this one will just focus on the photography.  We were also able to restore some of the 35 mm film digitally and they look great.

I’ve also wriiten a new record; I just need to record it.

HNN: The last question we always ask is about your favorite horror movies.  What are your personal picks?

Eerie Von: I really like Night of the Living Dead and Re-Animator but I am more into suspense films like Angel Heart.  Any Universal Monster movies are also great.

HNN: Thanks for taking the time to speak to us today and we look forward to your second photo book.

Misery Obscura: the Photography of Eerie Von (1981-2009) is available from Bazillion Points and wherever books are sold.

Staff Writer at Horror News Network
Nick joined the website in 2015. His lifelong love of comics and horror began with Universal Monsters and the Incredible Hulk. He has fond memories of going to Waldbaum’s supermarket with his mother and being rewarded with a 3-pack of sealed comics. It’s been all downhill from there… Since those early days, his life has been immersed in four color action and scares on the silver screen.
http://www.horrornewsnetwork.net/wp-content/uploads/2017/03/MISERY-header-090616B.jpg 339 600 Nick Banks http://www.horrornewsnetwork.net/wp-content/uploads/2016/05/HNN-logo.jpg Nick Banks2017-03-05 16:27:432017-03-05 16:27:43Misery Obscura Author and Horror Rock Legend Eerie Von: The Horror News Network Interview
0 replies