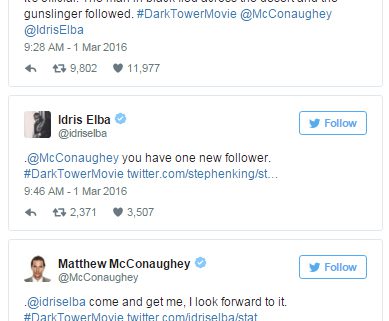 Nikolaj Arcel is directing the film, which will be produced by  Akiva Goldsman, Ron Howard, Brian Grazer and Erica Huggins.   Universal pulled out of the project back in 2011,   after which Sony picked it up. It is scheduled to be released January of next year.   You can view the tweets posted today below.

Staff Writer at Horror News Network
Lynn Sorel has been writing for Horror News Network since September 2014. You can catch up with her on Twitter at @gothicmermaid13. Read her full bio on our About Us page.
http://www.horrornewsnetwork.net/wp-content/uploads/2016/03/darktowertweets.jpg 480 389 Lynn Sorel http://www.horrornewsnetwork.net/wp-content/uploads/2016/05/HNN-logo.jpg Lynn Sorel2016-03-02 00:36:052016-03-02 00:36:05Matthew McConaughey and Idris Elba Cast in 'Dark Tower,' Confirmed by Stephen King
0 replies