Recently released on Amazon from Free Lunch Comics and comic creator Matt Ryan is The Terror of Wellfleet. The book centers around the residents of Cape Cod, Massachusetts and an abandoned military ship often used for target practice and drills, some of which are shrouded in mystery. This scenario, of course, can only mean some horrors will be resurrected.  We recently caught up with Ryan to discuss his latest work.

Horror News Network: The Terror of Wellfleet is set in the hot bed of New England summer fun, Cape Cod.  Were you at all influenced the by Jaws and the mass hysteria of that film on the Cape?

Matt Ryan: Definitely! My family went out there for the first time a couple years ago. Yes, the Jaws/Martha’s Vineyard was a strong influence…but the “Target Ship” S.S. James Longstreet is what truly fascinated me. A series of quaint shoreline neighborhoods with a nearby abandoned military ship left in the Cape Cod Bay for shooting practice.

Horror News Network: Tell us a bit about the characters and how the develop throughout the comic?

Matt Ryan: Al Chambers is the star of the book. A hard-working restaurant owner who never takes a day off. As fate would have it, he takes a fishing day with his best friend and that’s when the trouble starts.   Poor Al. Some people were just not meant to get away.   He’s the John McClane of Wellfleet!

Horror News Network: Will the series be ongoing?  How many issues?

Matt Ryan: My initial thought was no. I’ve been told by a number of readers that it’s their favorite work of mine…so of course…now I got to think about it.

Horror News Network: Not only is The Terror of Wellfleet written and illustrated by you, but it is also being published by your company, Free Lunch Studios.  What are some of the advantages and disadvantages of being self-published?

Matt Ryan: It’s a double-edged sword being a self- publisher. You’re involved in every aspect of the creative process. You’re dealing with all the positives and negatives. If you want to do well as a self- publisher, make sure you get an editor assigned to your projects. Buyers will notice.

Horror News Network: What are some of the horror comics that have influenced you over the years?

Matt Ryan: My friends would tell you that Conan is my favorite comic of all time. Yes, it’s a fantasy adventure book, but there often is quite a bit of horror themes. I LOVE my Creature from the Black Lagoon comic by Arthur Adams! I’m also a big fan of the Alien comics. 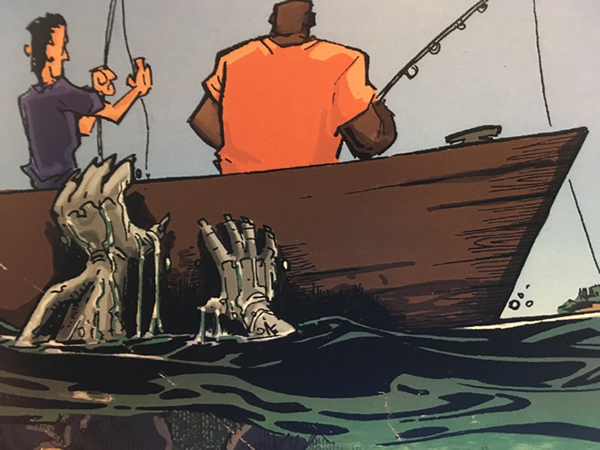 For well over a decade now, the world of horror comics has flourished with some of its absolute greatest and goriest works having the...
Read more