Regardless of whatever e-tailers might want you to think about the digital future of storytelling, book collecting is alive and more luxurious than ever thanks to small book publishers and limited run special edition publications. Horror novels in particular are known to get special treatment over the years, and this week’s announcement means another publisher will join the hallowed tradition of bringing high quality editions of popular texts to collectors’ bookshelves. LetterPress Publications announced they will enter the world of deluxe special editions with Stephen King’s Revival: The Deluxe Special Edition. 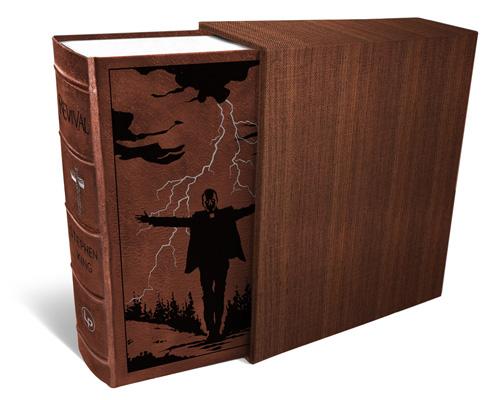 LetterPress Publications is owned by Brian James Freeman, a veteran in the field of special edition books who works for Cemetary Dance Publications and co-owns Lonely Road Books with Richard Chizmar. According to a recent blog post, Freeman states that LetterPress Publications started by publishing chapbooks and books for his Patreon supporters, and he plans to continue those projects but also complete, “one book this year, and then three to four books per year after that, if all goes well.”

The LetterPress Publications website reveals that Revival will be chock full of deluxe enhancements and quality materials. Some of the book’s bonus materials include full-color illustrations by François Vaillancourt, an introduction by Josh Boone (the writer and director of the upcoming movie adaptation), and a Rolling Stone interview with Stephen King. The book will feature an oversized, 7 x 10 inch design, and it will include a custom slipcase and a signature sheet signed by nearly all of the books contributors except for King.

One way that Freeman is launching LetterPress Publications’ first book differently is by offering the book exclusively for sale on other retailers’ and publishers’ sites:

“As my way of saying THANK YOU to all the indie retailers and publishers who have done so much for me over the years, I won’t be taking orders for Revival: The Deluxe Special Edition by Stephen King directly on the LetterPress Publications website, but instead I’m asking collectors and readers to visit the websites of the retailers who are selling this title and place your order with them.

An entire list of retailers may be found on the LetterPress Publications website. Fans who wish to add Revival to their collections should act quickly, as according to the site, “Slipcased Limited Edition to be limited to exactly the number of copies preordered between May 15 and May 31!”