Before Krampus injected some needed chills into traditional yuletide proceedings, the original dark spirit of Christmas was Frau Perchta (and her many iterations such as Frau Holda, Frau Holle, La Befana, etc.).  This Germanic legend embodies many of our preconceived notions (at least in appearance) of a classic witch, complete with scraggly hair, a long nose, and a broom stick made of straw.  And although she is less well known than the horned figure that takes over her role, she is equally terrifying, misunderstood, and engaging.

If you are looking for someone to shed some light on Frau Perchta, it is best to start with Al Ridenour, author of The Krampus and the Old Dark Christmas.  His exhaustive exploration of  holiday folklore from the Germanic countries details all aspects of Frau Perchta, The Krampus, and a variety of other dark figures and tales behind many of the traditions that we still celebrate today.  Al was happy to answer our questions on the origins of Frau Perchta and her connections to her more popular predecessor.

Horror News Network: How much older is Frau Perchta than Krampus?

Al Ridenour: She’s definitely older, probably a couple centuries.  It gets complicated because figures that seem mostly identical existed and filled identical roles went by different names before the names “Krampus” or “Perchta” may have been attached. There are references to Frau Perchta that date to the 1500s.  The word “Krampus” really only became universalized as a name for this figure with the circulation of Krampus cards in the early 1900s, and the first references in print appear no earlier than the mid to late 1800s.  Even today, “Krampus” isn’t the preferred term for this figure in certain regions.

HNN: How or why does the transition occur from Perchta to Krampus?  Was the marginalization of Perchta a direct result of the Christian influence in the region?

Ridenour: First I should point out that “Frau Perchta” and the “Percht” figure (plural “Perchten”) are not exactly the same.  Frau Perchta could be understood as a individualized exemplar or embodiment of the spirit race of Perchten. She first seems to be understood in the written record, which was written by Christian clerics after all, as a sort of wicked female spirit associated with witchcraft, undead spirits, or demon hordes.  The pagan beliefs about her and her race were more ambivalent.  The Perchten can kind of be understood as the Alpine equivalent of fairies, though a species of fairy only associated with certain Winter dates. They would also not necessarily be understood as female, as with Frau Perchta. The Perchten could bring both good luck or, if not appeased, bring dreadful misfortune.  This punishing/rewarding aspect, gets very specifically attached in the case of Frau Perchta, to certain tasks like spinning, and generally to the notion of preserving good domestic order.  So, you can see it’s sort of reinforcing the given social order in the same way as the Krampus in his duties with St. Nicholas.  This so far is all just about the folklore, the tales told, or beliefs held about an invisible realm.

Traditions involving actually dressing up to embody these figures are a different matter.  A number of folk practices between Christmas Eve and January 6 or Epiphany were explained as an attempt to enact the Perchten myth.  At its most common, basic level, this would amount to young men disguising themselves and going out by night for a bit of mischief. Perhaps they would black their faces with ash, wrap themselves in old hides, or do whatever they could to make themselves appear more “wild” or frightful.  In small bands, they’d roam from home to home or farm to farm with bells or various noisemakers to surprise the occupants.  In theory, they were supposed to represent these frightening powerful Perchten.  It was very much like a Trick or Treat situation.  Coming to the door to acknowledge them with a bit of food or drink functioned just like leaving a food offering to the spirits who might be invisible — it brought good fortune for the coming year.

On the one hand, we can look at the Krampus tradition as a sort of Christian domestication of this earlier unruly tradition.  Nicholas would have been inserted as a sort of godly chaperone to make things a bit less threatening.  On the other hand, there were earlier traditions of individuals teachers in the cathedral schools themselves as the saint on his feast day, without the benefit of accompanying devils.  Adding the devils to this tradition had the opposite effect of making it more lively and a bit scary.  In any case, the Krampus tradition became more robust, and perhaps it’s this balancing act between good and evil that gives it its ongoing energy. 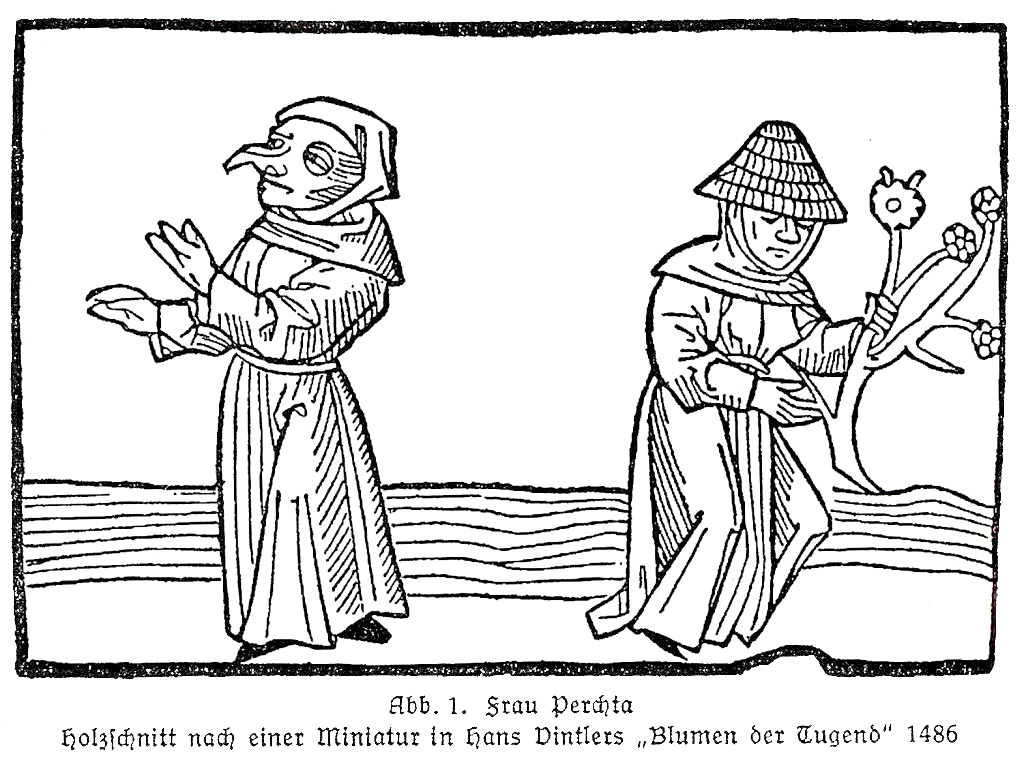 HNN: Is Frau Perchta still celebrated in the German-speaking countries?

Ridenour: There are absolutely Perchten runs in Bavaria and Austria, but they are something of a modern reinvention.  To most of us they would look almost identical to Krampus runs, but there is never any Nicholas figure, because they take place after St. Nicholas Day.  The modern Percht costumes, like the Krampus, must include a bell belt, and otherwise looks more or less like a Krampus.  Perhaps a bit less human in the mask, and some will tell you that, unlike the Krampus, the Percht can have multiple sets of horns, not just two, but this isn’t true everywhere.

There are only a couple regions with Perchten traditions that date more than a couple decades back, and here the Perchten may be represented very differently, and won’t always appear so monstrous or demonic. In one region, both “good” and “ugly” Perchten are represented, and the good Perchten are done up with ornate headpieces that look like something out of Mardi Gras.  There are also traditional dances associated with these older traditions.

HNN:  Some people like to associate Perchta with “Goddess culture” and history.  Is there any truth to this?

Ridenour: I go on a bit of tear about this in my book.  There’s a lot of wishful revisionism at work here.  The most universal and enduring understanding of the Percht was as a frightening spirit associated with the night, winter, and the wilderness.  In the 16th to 19th century, it would have been more of a loose folk construct similar to a rustic bogeyman, not a specifically female figure, and not an object of organized religious worship like a goddess.  The name “Perchta” comes from a Bavarian name for Epiphany, the date around which these spirits would emerge, and the phrase for that celebration in Bavarian uses a term meaning “shining,” so some writers have seized on that and parlayed it into their female “figure of light,” but in this sense, “shining” would have just just been embedded in stock phrase, the way “sun” is embedded in the word “Sunday.”  It’s just the same as literal meaning of the Greek work “epiphany” meaning “shining forth” or “manifestation.”  This frightening Percht spirit just happens to be associated with this date. It’s not uncommon to have figures of folk belief named after saint’s days or calendrical dates.  There is a scary “Bloody Thomas” figure associated with St Thomas day in Germany’s Bohemian Forest, and also an monstrous “Bad Lucy” associated with St. Lucy’s Day.  So, I can’t get aboard the “Perchta as the Shining One” train.

What is really amusing to me, is an encounter I had with some artist who insisted that Perchta’s well known punishment of bad young women who had not completed their spinning — namely, slashing open their bellies, gutting them, filling the with ice, rocks, or straw, and stitching them back up — was in fact the way the Goddess helped them pass the privations of the season, giving them a nice full, cozy feeling when food might be scarce.

HNN: Thank you for taking the time to enlighten us about this intriguing folkloric figure.  We will be sure to leave out some porridge for her this holiday season!

The Krampus and the Old, Dark Christmas is currently available at finer bookstores everywhere and directly from the Feral House website.

Fans of Mike Mignola and his expansive "Mignolaverse" have a lot to look forward to in the upcoming months. Not only will fans see the...
Read more

Horror News Network reported in October that Krampus and Trick 'r Treat director Michael Dougherty would write the next installment in the Godzilla reboot, but...
Read more