After the Halloween season ends, and Christmas knocks all of the plastic skulls and jack-o’-lanterns off the store shelves, most horror fans have traditionally found solace in Tim Burton’s stop motion classic The Nightmare Before Christmas or evil Santa Clauses in Black Christmas and Silent Night, Deadly Night.  At the dawn of the new millennium, fans found another “kindred spirit” in the form of Krampus, primarily through Michael Dougherty’s film of the same name.

Dougherty’s version of Krampus sent many fans searching for the actual traditions and customs associated with the horned beast from the mountainous regions of Austria, but very little information existed, until now that it is.  Al Ridenour’s new book The Krampus and the Old Dark Christmas: Roots and Rebirth of the Folkloric Devil (Feral House) fully captures the culturally accurate story of Krampus, as well as some of his fore bearers in the dark corners of the winter holiday.  Horror News Network was able to speak to Ridenour about his new book and the origins of a new holiday favorite of the horror community.

Horror News Network: How did you first learn about the traditional Krampus figure?

Al Ridenour:  When I lived in Berlin after college, I first encountered Krampus through the traditional postcards which can be found throughout Germany at Christmas time.  These are the same postcards that introduced the character to a wider audience in the early 2000’s on the internet.  I wanted to learn more about the mythology and folklore associated with Krampus, so I decided to visit the traditional birth place of the character which was in Austria, particularly Bavaria and the Alps.  I ended up going to  Bad Gastein which is south of Salzburg since I heard that they took care to preserve the original customs well there.

HNN: What were your first impressions of the rituals and customs associated with Krampus in this region, particularly the Krampus Run?

Ridenour: I had seen the videos on YouTube and they always appeared to be the liveliest, but it was certainly a vivid experience to witness in person.  Most people think of the Krampus Runs as resembling a civic parade, but they definitely have an unstructured, anarchic feel to them.  They aren’t out of control, but they also aren’t scripted. Most of the people in costume are local teens and young men in their twenties.  The costumes are made of traditional animal hyde and the smell is certainly a barnyard smell, so you don’t only hear them coming, you also smell them.  When they get close, the noise is jarring as they carry 3 or 4 huge bells each.  The spectators are routinely chased, smacked, and frightened; it is a visceral experience. This usually doesn’t happen to tourists (the chasing, etc.) as they often observe a protocol in terms of leaving them alone and instead engage with their friends and family in the crowd. 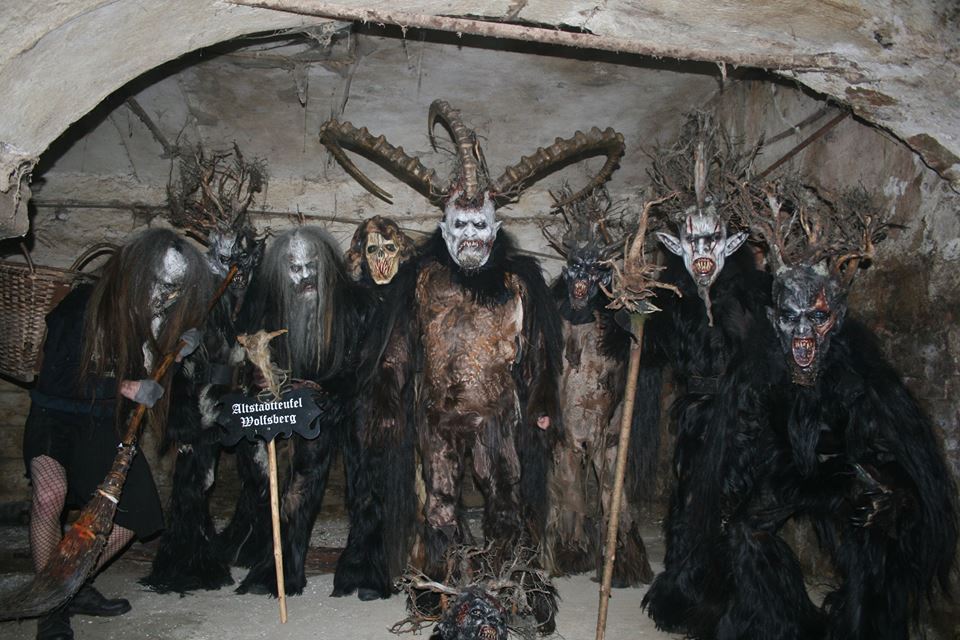 HNN: What did you find in your research about the origins of Krampus?

Ridenour: The Krampus is made up of many threads that come together.  Most of the information we have today comes from the Alpine Valley in Bavaria and Austria.  They have traditional masks there that date back to the 1930’s and there is one in a museum in Innsbruck that is from the 1700’s.  He is also very popular outside of this region in Germany, Czechoslovakia, and Hungary.  This is where the postcards became popular since the Austro-Hungarian Empire was the first to send postcards.  This version of the character is a more “cosmopolitan” one than the traditional Krampus that is found in the Alps.

HNN: He appears to bear a greater resemblance to the Christian Devil in these postcards.

Ridenour: Yes, he borrows his look from that tradition as well as the stage tradition of Mephistopheles. He also resembles the satyr with his goat legs and shorter horns.

HNN: Does Krampus have any connections to Norse mythology?

Ridenour: There are some ingredients from Norse mythology in the recipe, but not really.  This conception mainly comes from Gerald Bron’s Krampus:the Yule Lord art book where he writes that Krampus is the son of Loki.  The character actually has more Celtic and Italian carnival influences.  Santa Claus is the same way with about a million different ingredients as well.

Where you do find some connection to Norse mythology is through “the Wild Hunt” references. This was part of Germanic tradition and took place during the 12 Nights of Christmas between Christmas Eve and Three Kings Day.  Some researchers will connect the tradition to this as different versions were observed in France, the United Kingdom, and Scandinavia.

HNN: How and when does Krampus travel to America and what accounts for his spike in popularity?

Ridenour: He is perceived differently here, but I think it comes out of a defiance of Christmas tradition.  Many people have been looking for a ways to to deal with the holiday season and the older folk traditions do this for some.  In the 1960’s, people brought back the traditions of the Yule Celebration and Kwanza.  People who want to get away from the Christmas traditions have looked to things like “the Santa Slasher” movies,especially in the punk rock era.

HNN: What were your impressions of the Michael Dougherty film that made Krampus a house-hold name?

Ridenour: In 2013, I helped put together the Krampus Ball in Los Angeles and we were contacted by the producers to see if we could help them with some grass roots marketing.  I liked Dougherty’s Trick ‘R Treat so we thought it was a good idea.  We realized early that they weren’t going to follow all of the folklore.  At one point they (the producers) were trying to tie Krampus to Santa Muerte (a traditional Mexican goddess associated with healing, protection, and guidance to the great beyond) to appeal to a Latino audience.

The film ended up being very different from the folklore and made the character into an “Evil Santa”, rather than the servant of St. Nicholas.  The spirit of the character and tradition is completely different in the film.  He works for St. Nicholas, he doesn’t oppose him.  I also thought that the victims didn’t deserve it.  I imagine that the inclusion of the Austrian grand mother was an attempt to sell the story as “traditional” but it is a different version.  I understand why they may have wanted to take the Saint out of the story to appeal to a secular audience. 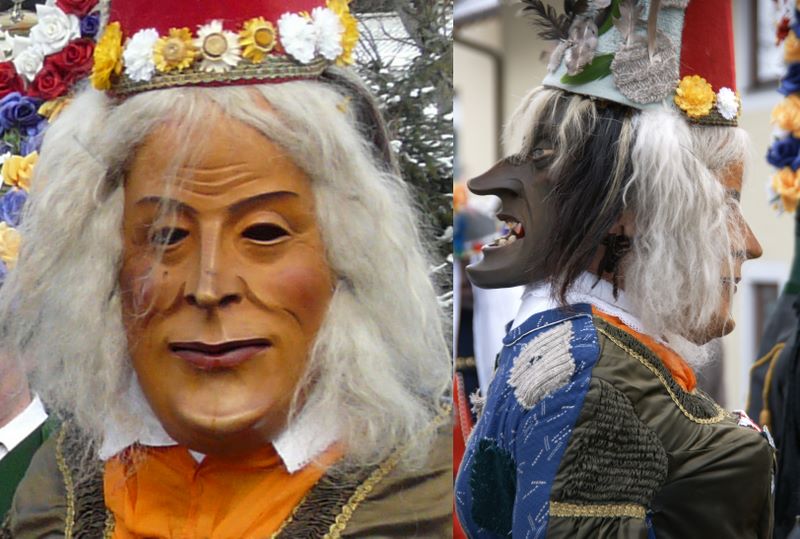 HNN: In the book you also focus on other dark Christmas traditions such as Frau Perchta.  Does this character relate to/connect to Krampus?

Ridenour: Krampus takes over Frau Perchta’s role when Christianity moves into these regions.  Frau Perchta is the pagan Krampus without St. Nicholas and predates Krampus by hundreds of years (as far back as 1100 A.D.). She represented the vital energy of the earth and was an amorphous female character.  The celebrations (which would take place during the Epiphany on January 6th as opposed to Krampusnacht which took place before St. Nicholas Day on December 5th) centering around Perchta were practiced by the peasant class and got very wild.  There was also a costume tradition involving Perchta where villagers would dress as the winter witch and visit your house in search of food, money, or booze.  These celebrations also involved music, song, acrobatics, and dancing and often involved a ritual blessing.  As time went on, the celebrations became less wild and more civilized.

She is much more of a “boogeyman” figure when compared to Krampus.  The stories told about her (and to children) are certainly more gruesome. There is one tale that describes how she guts children who don’t finish their sewing work or consume the right food on her “holy” day and then sews them up with garbage inside their bellies.

HNN: What can you tell us about the Krampus Ball that you run in Los Angeles?

Ridenour: It has been a sell-out every year we have hosted the event.  The Ball is designed to preserve and share the traditions from the Bavarian region and we bring over a lot of the original elements.  We host the parade (Krampus Run) of course, but we were also the first city to fly a Krampus troop from Austria with the authentic costumes and performers.  We also stage a 19th century Krampus Play and modernize the tradition with performances from Krammpstein and Marilyn Krampson, who cover Rammstein and Marilyn Manson songs with some lyrical adjustments and in full costume.  Anyone interested in the event can check out the website http://krampuslosangeles.com/ for more information.

HNN: We always end our interviews be giving people a chance to discuss their favorite horror films, stories, etc.  Are you a horror fan?

Ridenour: I am; I grew up watching horror films and they are a big part of my life.  A recent favorite is definetly The Witch.  I enjoyed the folklore aspects and the supernatural and naturalistic elements of the film.  It really impressed me.

HNN: Thank you for your time today and for sharing your knowledge of Krampus and Frau Perchta with our readers.

Before Krampus injected some needed chills into traditional yuletide proceedings, the original dark spirit of Christmas was Frau Perchta (and her many iterations such...
Read more

Fans of Mike Mignola and his expansive "Mignolaverse" have a lot to look forward to in the upcoming months. Not only will fans see the...
Read more