For many horror fans who grew up in the 1970’s, Kolchak: the Night Stalker holds a special place in their hearts.  In fact, it was one of my first introductions to the genre at seven years of age.  I can vividly remember my father watching an episode on the tri-state area’s very own WWOR Channel 9 in our living room.  I walked by the television holding onto my plastic Frankenstein figure and saw what I guessed was a dinosaur attacking someone in a sewer.  When I asked my father what he was watching, he replied “The Night Stalker”.  Intrigued, I said “What is this show about?”  My father summarized the program for my seven-year old sensibilities and told me that it was “a show about a guy who hunts monsters”. Naturally, I was hooked.

Later, I’d know that episode as “The Sentry” and that the dinosaur was actually a lizard-man that lived in the sewers, but the seed was planted.  We watched as many episodes as we could back then featuring werewolves, vampires, androids, as well as the Devil and a headless motorcycle rider just to name a few, and I didn’t see The Night Stalker again until the Sy-Fy Channel (or as it was known back then the Sci-Fi Channel) started playing the series in the mid-90’s.  Shortly after, due to positive fan response and Chris Carter’s plugging of the show in virtually every interview he did on the success of the X-Files, Universal released a dvd set of the program and MGM Home Video released the original “movies of the week” that launced the series, The Night Stalker and The Night Strangler, on a double feature disc.

It has been over 10 years since U 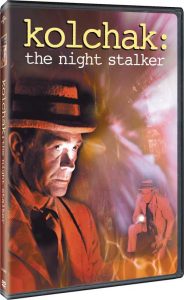 niversal’s original dvd release, and although the program is currently streaming on Netflix, fans of the series have often requested an new edition, not wanting to pay exorbitant after-market prices on ebay.  Thankfully, Universal has responded with a new reissue of the beloved series.

While it is not the blu-ray collection that fans would have preferred, the chance to get all 20 original episodes on five discs is hard to pass up.  The quality of the grainy original look of the series has been preserved (for better or worse) and the transfer is similar to the original Universal release.  One improvement of the new collection is that it contains five discs as opposed to the three double-sided discs used in the first collection.  Fans often complained that the image would “stick”  so it does appear that they have corrected the compression problems that affected the older set.

Although fans can hope for a blu-ray collection with the inclusion of the two original films and additional commentary or a documentary, being able to own all 20 original episodes of the series again for a reasonable price is the real draw here.  The world of streaming content is a volatile one and shows disappear daily on services like Netflix, so this is a chance for fans and collectors to own a physical copy of the series.  Let’s hope that sales of this collection will influence Universal to invest the time and money into this seminal series that has inspired generations of creators and thrilled fans over the past forty years and produce a deluxe blu-ray edition that all Night Stalker fans deserve.