When it comes to comic book adaptations of major horror and sci-fi film and television properties, there is no writer in the industry more prominent than Jody Houser. After adapting such hit franchises as Star Wars, The X-Files, Orphan Black, and Halo, the writer has recently turned her attention towards the expanded universe of Stranger Things. Horror News Network sat down with Houser at the Dark Horse Comics booth at New York Comic Con 2019 to learn more about her writing process and her creative decisions when crafting the graphic novel world of Stranger Things.

Horror News Network: You’ve adapted so many major film and television franchises into the comic book format over the years. In what ways was your approach to adapting Stranger Things similar to how you approached those other major properties, and what is unique about Stranger Things which required you to take a different approach when adapting it?

Jody Houser: I think the process for Stranger Things was very similar to working on Star Wars or Orphan Black, or any of the other ones I’ve worked on where you’re coordinating between the publisher and the license owner. So there’s multiple levels of approval as compared to a book that you’re just writing straight up for a comic book publisher on a properly that they own. And I think what made Stranger Things different was we tried to echo what they did with the TV show, in how they made it feel very much like a product of the era. For the comic- especially the first volume- we did things like thought balloons and narrative captions and those touches that you would find if you picked up an 80s comic but you don’t really see in comics today. And then, of course, the coloring was muted in a way that a lot of modern comics aren’t. So we wanted to have it feel like a product of the 80s but also feel newer and fresh. The goal was to try to find that nice happy medium.

Horror News Network: Stranger Things: The Other Side takes place during the events of Season One, but it focuses on Will’s perspective in the Upside Down. What was it about this concept that inspired you creatively?

Jody Houser: We were working on this before Season Three came out and we hadn’t really gotten the chance to see Will be anything other than really sort of the victim, the object of the quest in the first season. So I was really excited to tell the version of the story where Will gets to be the hero. Because all these other adults went into The Upside Down, and this kid is the only one who made it out. The fact that he survived for so long on his own, I got to find those moments where he was more of a hero than we realized. That was just a lot of fun to work with.

Horror News Network: Stranger Things: Six tells the story of a brand new character named Francine who is trapped inside the infamous Hawkins Laboratory. What kinds of ground rules did you set for yourself when writing to find the right balance between exploring familiar characters and motifs from the Stranger Things universe and introducing readers to something new and unique?

Jody Houser: That one was definitely more challenging because it was almost all entirely new characters aside from Dr. Brenner. But we also looked back at the influences of Stranger Things, things like Stephen King. We were inspired very much by things like Firestarter and the powers that people in those books had. I used that to influence what we did with Six, and to have kids with powers that felt like they still fit in the world; but also no one who is as powerful as Eleven because she was obviously the best success from the Hawkins’ program. It’s creating a new story, but set within the universe and making it feel like a part of that universe.

Horror News Network: Who are some characters from the Stranger Things televisions series that you’d like to explore further in future comic installments? What about them makes them interesting candidates for a comic series?

Jody Houser: I love Eleven and I haven’t really worked with her, but she’s obviously a character that we’ve seen so much of on the show that I feel like there’s maybe less for me to say about her that hasn’t already been said.

I got to do a little bit with Steve Harrington in the Free Comic Book Day issue from this year, but I wrote it before I saw Season Three Steve. So that was still very much based on Season Two babysitter Steve, and trying to find that moment between Season One and Two where you can start to see a little bit of that concern for the younger kids coming through and the start of that evolution. He also started at one of the lower places, so he had the most to grow. You could maybe say the same about Billy, but he’s not gonna be growing anymore, unfortunately!

Steve is definitely a character I think would be a lot of fun to write further because the journey he’s taken- almost more than any other character on the show- how much he’s grown as a person. He went from being this despicable bully to everyone’s favorite mom character, essentially. I think I’d like to get to see how all of the events of Stranger Things affected him. It would be a really fun story to tell.

Horror News Network: The Stranger Things franchise seems to only get more and more popular each and every year. Why do you think modern audiences connect so strongly with stories set inside of the Stranger Things universe?

Jody Houser: I think that at the end of the day, it’s always going to be about the characters. You can push all of those nostalgia buttons, you could have really cool special effects, you could have cool monsters; but if there aren’t great characters for you to fall in love with and follow and root for, you’re just not going to have that sort of connection with the story. And the fact that people are going around dressed in the Scoops Ahoy costumes, that really just shows it’s not even the horror aspect of the show necessarily that is latching on to people. It’s the friendship and the family and the character growth that we see. At the end of the day, a good story is always going to be about the characters.

Horror News Network: How does a comic series based on Stranger Things get comic books out to a wider group and bring them into the medium?

Jody Houser: That’s one of my favorite things about licensed comics because it provides an easy in for new readers because it’s a world that you’re familiar with. So you can take the time to develop a feel for the medium. I’m someone who grew up reading comics, but if you haven’t really read comics before it could be a little bit challenging to find your way through the page. Librarians call it “comics literacy.” There are adults who haven’t read comics before or maybe read the Sunday strips, but just picking up a new comic could be really intimidating. I think if the world is familiar, if the characters are characters you know, that makes it a lot more friendly for readers to take their first steps into that world.

Do you have any upcoming projects that you could tell us about? 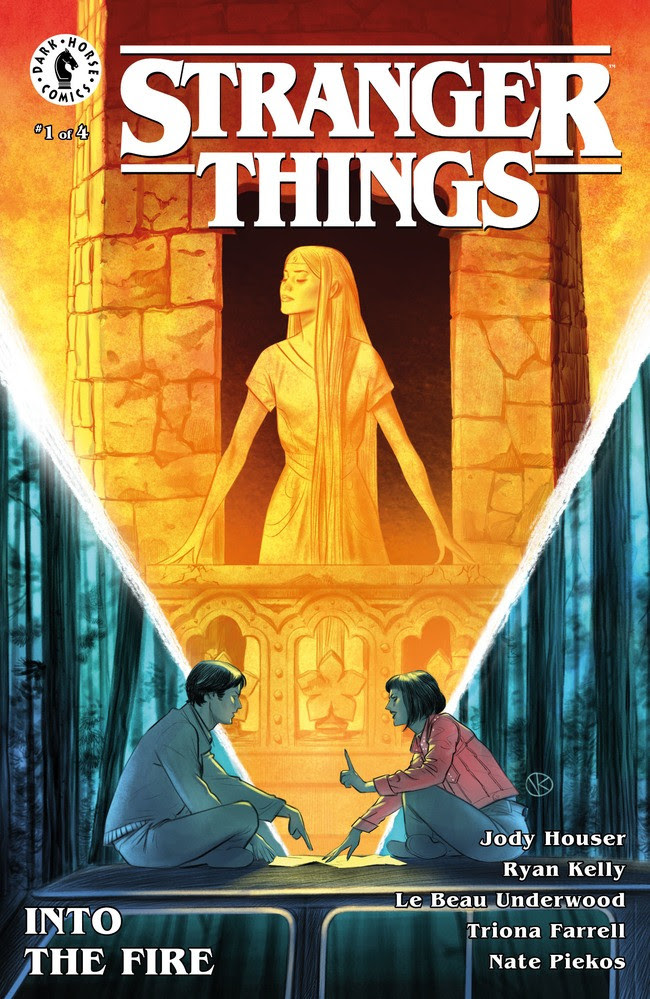 Nick Banks contributed to this interview.