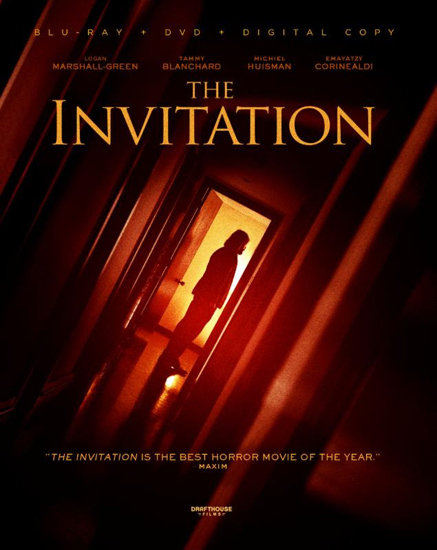 Drafthouse Films’ The Invitation will released on Blu-ray and DVD on July 26th. Karyn Kusama directed the film, which stars Logan Marshall-Green, Tammy Blanchard and Michiel Huisman. You can view the full press release below.

“”This is how a twist ending is done..as chilling as it is perfect. A-”
– Chris Nashawaty, Entertainment Weekly

“One of the scariest movies you’ll see this decade.” -Fangoria

Dubbed “the best horror film of the year” by Maxim, the stylish chiller The Invitation will arrive in a Blu-ray + DVD combo pack on July 26, 2016, from Drafthouse Films. In this taut psychological thriller from award-winning director Karyn Kusama (Girlfight, Jennifer’s Body), the tension is palpable when Will (Logan Marshall-Green, Prometheus) shows up to a dinner party hosted by his ex-wife Eden (Tammy Blanchard, Into the Woods) and new husband David (Michiel Huisman, “Game of Thrones”). The estranged divorcees’ tragic past haunts an equally eerie present; amid Eden’s suspicious behavior and her mysterious house guests, Will becomes convinced that his invitation was extended with a hidden agenda. Unfolding over one dark evening in the Hollywood Hills, The Invitation blurs layers of mounting paranoia, mystery, and horror until both Will-and the audience-are unsure what threats are real or imagined.

Kusama’s thriller opened the Midnight section of the 2015 SXSW Film Festival before receiving wide acclaim during the nationwide theatrical release. For Kusama, who first made her mark with the breakout 2000 hit Girlfight, The Invitation boasts a triumphant return to her independent roots, as well as an impressively-crafted script written and produced by screenwriting duo Phil Hay and Matt Manfredi (Crazy/Beautiful, Ride Along). Also starring isEmayatzy Corinealdi (Miles Ahead, “Roots”) and John Carroll Lynch (“American Horror Story,” Zodiac).

Special features on the Blu-ray and DVD of The Invitation include audio commentary with Kusama, Hay and Manfredi, “The Making of The Invitation,” music videos for original songs by Craig Wedren and Benjamin Newgard, the theatrical trailer, a HD digital copy of the film and booklet featuring an original essay by critic Britt Hayes.

I’ve always been a sucker for a good horror anthology film. From Creepshow to Tales from the Darkside: The Movie to 2009’s Trick ‘R...