Blog - Latest News
You are here: Home / Horror Movies and TV Shows / ‘In Search of Darkness’ Director David A. Weiner: The Horror...

Although many eras of horror have their own flavor and army of fans, the horror decade that has received the most praise, imitation, and love in recent years is undoubtedly the 1980s.  The era of big business, big hair, and low budget horror is rife with enough horror films to pack any documentary, but before director David A. Weiner unveiled his work on In Search of Darkness: The Definitive ’80s Horror Documentary, no one had ever attempted to capture the zeitgeist of the decade in such a fashion.

Following a hugely successful crowdfunding campaign, and continuing exhibitions at festivals around the country, Weiner sat down with us to discuss the origins of the comprehensive documentary and why horror from the ’80s still holds a special place in the hearts of horror fans.

Horror News Network:  What was the genesis of In Search of Darkness?

David A. Weiner:  The documentary comes out of my executive producer’s (Robin Block) vision to look at the ’80s horror genre on its own and focus on why it was so special.  This resulted in the year by year approach that the documentary takes and the expansive nature of the film.

HNN:  You went the crowdfunding route with In Search of Darkness and it experienced dramatic, almost instantaneous results, correct?

Weiner:  Yes, the response blew me away.  We funded the project in two days, raising $309,000 by the time the Indiegogo campaign ended.  Crowdfunding is always a gamble, but how can you go wrong with ’80s horror?  Even still, we weren’t sure it would take hold the way it did, especially since there were already many film specific documentaries such as Crystal Lake Memories and Never Sleep Again.  It seems like fans were hungry for more and it struck a raw nerve in a good way!

HNN:  How did you decide on the year to year approach with the film?

Weiner: The ’80s had an incredible amount of output in the decade and all managed to establish some type of foothold.  Even in a four and a half hour documentary, you can’t cover it all, some films are bound to slip through your fingers, so we tried to feature some very well-known films as well as some forgotten ones.  We tried to include a variety of perspectives on the films, especially from those that had a hand in making them.  That’s why the larger context chapters in between the years are important, because they help paint the entire picture of the decade.

HNN:  The run time of the production is certainly impressive.

Weiner:  Yes, because of the run time, when we have shown it on the festival circuit, we usually break it up into two parts.

HNN:  Which horror film do you think best defines the decade?

Weiner:  I would say Stuart Gordon’s Re-Animator.  The film came out half way through the decade and Re-Animator takes a hard left turn with a lot of diverse influences.  It is based on an H.P. Lovecraft story, but is also a twisted Frankenstein tale, with a lot of violence, sex, and an outrageous sense of humor.  It is a good freestanding film and one that pushed boundaries, and no one can forget the infamous head scene.

We were able to talk to Barbara Crampton about the scene and her work on the film and she was able to detail the experience, both as an actor and a woman in an era where systemic nudity was the rule of the day.

HNN:  Was there anyone in particular that you were excited about getting for the documentary?

Weiner:  The diplomatic answer is of course everyone, but honestly, everyone contributed something different and something important to In Search of Darkness.  Late in the game, we were able to add Slipknot’s Corey Taylor to the production and he was able to provide knowledgeable insight into the fan’s experience watching these films for the first time.  Corey started as a backer and then was able to add his charismatic personalty to the film.

We also were able to get people like composer Harry Manfredini and we was able to bring the insight into the use of music, especially for Friday the 13th.  The director of Friday the 13th, Sean S. Cunningham actually found the film to be boring before Manfredini’s score was added.

John Carpenter was another person we wanted to speak to, and although he is revered now, he took some lumps in the 1980s.  He was able to talk honestly in the documentary about how the initial box office performance of The Thing, which is now viewed as an absolute classic, lost him the job on Firestarter.  Carpenter certainly gets the last laugh on that one, but it wasn’t the case as the time.

HNN: The impact of the VCR on the 1980s can’t be overstated and you also discuss this in the film.

Weiner:  Yes, the VHS revolution changed the game for horror films.  People like Charles Band were able to access the direct pipeline to viewers and produce cheap, easy, direct to video content.  The films were creative, ridiculous, sexy, gory, violent, and the VHS sleeves were covered with insane artwork which made any fan say “I’ve got to see this!”.

HNN:  Have any films been able to capture that ’80s aesthetic in recent years?

Weiner:  The Void is one that stands out to me.  It’s not a perfect film, but it has great use of practical effects and some of the odd, creative elements that can be found in ’80s horror.  I’m also a person that is on the Hereditary/Midsommar train, but I think that both of those films owe more to ’70s horror than the ones produced a decade later.  We haven’t had a horror icon in recent years like all of the ones that came of age in the ’80s.

HNN:  Are you releasing a physical copy of the documentary for those who missed the crowdfunding opportunity?  Any plans to stream it in the future?

Weiner:  We are offering a limited edition in the DVD and Blu-ray format until Halloween at the website with a number of bonus items such as a poster, print, and pin.  We don’t have any streaming plans to announce yet, but we may sometime in the near future.

The length of the documentary and the format makes it easy to watch the documentary in parts and you can take your time with it.  The DVD and Blu-ray also allow one to easily navigate to a certain year or film or even the contextual chapters, so you can control the way that you watch the presentation as well, which challenges the traditional way we consume documentaries.

HNN:  After this monumentous undertaking, do you have any other projects on the horizon?

Weiner:  Yes, we are actually taking on ’80s sci-fi next with In Search of Tomorrow, which I am also a huge fan of.  We are currently in pre-production and will also go the crowdfunding route with this one in March of next year.  We are locking in the same type of talent that we were able to get in In Search of Darkness and the documentary will cover all of the huge hits from the era, as well as some of the stranger, low budget takes on sci-fi that some people may have forgotten.  We are very excited to see where it goes.

In Search of Darkness is currently available until midnight on Halloween night.  Along with the standard edition, there is also a limited Elvira, Mistress of the Dark edition. 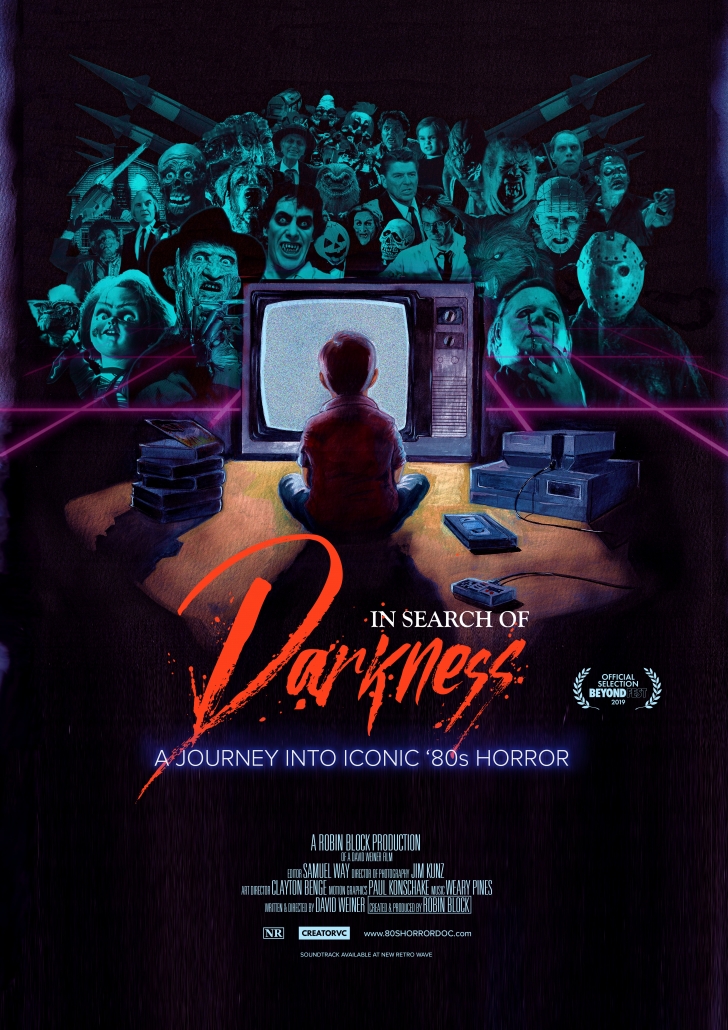 HNN Productions' 'Halloween in a Box' Documentary Gets Distribution and a Release Date
Official Trailer Revealed for 'Wrinkles the Clown'
David Weiner Talks 'In Search of Darkness: A Journey Into Iconic ‘80s Horror'
Get Ready to 'Hail Satan?' With New Trailer For Upcoming Documentary by Penny Lane
'Heavy Metal' Magazine Documentary in Development at Fox Digital
CT HorrorFest Returns to Danbury and Rocks Once Again in 2018

Staff Writer at Horror News Network
Nick joined the website in 2015. His lifelong love of comics and horror began with Universal Monsters and the Incredible Hulk. He has fond memories of going to Waldbaum’s supermarket with his mother and being rewarded with a 3-pack of sealed comics. It’s been all downhill from there… Since those early days, his life has been immersed in four color action and scares on the silver screen.
http://www.horrornewsnetwork.net/wp-content/uploads/2019/10/ISOD.jpg 873 1552 Nick Banks http://www.horrornewsnetwork.net/wp-content/uploads/2016/05/HNN-logo.jpg Nick Banks2019-10-09 20:18:282019-10-09 20:18:28'In Search of Darkness' Director David A. Weiner: The Horror News Network Interview
0 replies