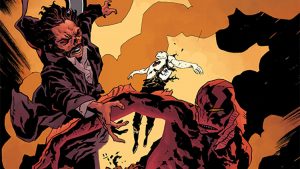 After a number of mini-series and one shots featuring Hellboy’s closest friend and ally Abe Sapien, his on-going series started in April of 2013 and wrapped up in August of this year.  With no permanent Hellboy book to speak of (and the small problem of Hellboy’s death), Abe took center stage as one of the original humanoid characters in the Mignolaverse.  Abe was always an introspective, intelligent character that balanced Hellboy’s “shoot first and ask questions later attitude”, but this series allowed fans to fully understand the man inside the monster and the difficulties that Abe often struggled with, trying to balance his own well-being and quest against the needs and safety of others.  Invariably, Abe almost always picked the selfless route and the final seven issues released this year ended in a typical bitter-sweet fashion for the lovable, blue “gill-man”.

Although fans will certainly miss the engaging stories and beautiful art, we hope that all those involved with making Abe Sapien a success will continue to explore similar themes in future endeavors with the same attention to detail and literary quality that this series provided (and if you want to tell more stories about Abe, I don’t think anyone will mind either…)