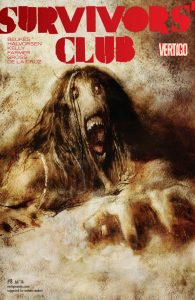 The nightmare enducing image is one of many by Sienkiewicz this year.  Sienkiewicz has been the only cover artist for the Vertigo Comics series and with images like this one, it is no surprise as to why.  Survivors Club (written by Lauren Beukes and David Halvorson with art by Ryan Kelly) focuses on six children of the 80’s who all experienced supernatural events in their lives at a young age and as adults they form a type of support/investigative group when odd things begin happening to them again.

Sienkiewicz has worked in the comics industry for over 35 years and is well known to horror and mainstream comic fans alike.  Many older fans first discovered his work on Marvel Comics Moon Knight as a back-up feature in the pages of Hulk Magazine in 1979.  The serious take on the hero endeared him to many adult fans and Sienkiewicz helped establish the tone of the cult favorite hero in his first regular series and served as the interior and cover artist for the majority of the four year run.

He has focused on horror titles in recent years, ranging from cover work to his unique pencil and ink style.  Sienkiewicz penciled 30 Days of Night: Beyond Barrow, contributed a story to The Nightmare Factory – Volume 2 graphic novel, and inked D.C.’s Reign in Hell series.

While there were many covers this year that deserved consideration, we were all amazed at cover #1D for the first issue of Morbius by...
Read more