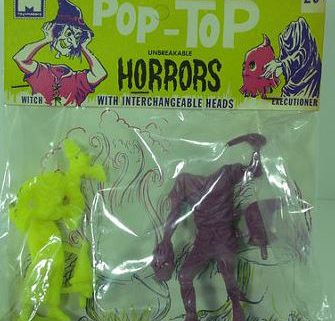 Welcome to another thrilling installment of Horror Hunting!  In this edition, we recap some of the highlights (and major announcements) that affect horror fans and the horror toy market coming out of last weekend’s Toy Fair 2016 in New York City.  Quite a few goodies and surprises were presented to the collectible-hunting community, and we’ll touch upon  a few of the biggies here in this column courtesy of our friends over at Action Figure Collectors (http://actionfigurecollectors.com/).  Of course, I’ll also be showcasing a piece of vintage horror goodness as well, for all of the purists out there.  Big things are in store, so away we go…..

Sometimes, the beauty of a vintage toy’s collect-ability is in its simplicity.  This is especially true of horror toys, as the mere appearance of Dracula, Frankenstein, or any of the other OG monsters were enough to inspire fear in the hearts of every kid at the soda jerk.  Etsy is now featuring a 2-pack of Pop-Top figures, featuring a Witch and Executioner (with interchangeable heads!).  Still sealed in its original plastic coffin with cardboard signage, this scary slice of 1960s horror plastic does run a bit on the high side at $400.  But how much is nostalgia really worth, especially in its original packaging?

Last weekend was the annual 4-day event in New York City known as Toy Fair.  This year, with the ongoing cinematic avalanche of Marvel, DC, and Star Wars movies bombarding multi-plexes nationwide, the cream of the crop in terms of toy companies rolled out their greatest hits and glimpses into the toy store aisle future.  Our friends over at ActionFigureCollectors.com (http://actionfigurecollectors.com/) were there to capture every exciting display and sneak peak with some awesome coverage now available on their website.
In terms of horror items, AFC was kind enough to keep HNN in the loop on some pretty killer figures and statues that are rolling out during the course of 2016.  Among the highlights:

– NECA has secured the rights to the “Ash vs. Evil Dead” action figure line, and we should be seeing these impressive pieces later this year

– Speaking of NECA, they also announced at Toy Fair 2016 that they will be releasing the ULTIMATE JASON Voorhees figure in the style of Friday the 13th part 3 (complete with 3-D lenticular packaging, two masks, two head sculpts and a large assortment of weapons unique to the movie).  It’s due out in June, but as of now it’s unclear whether this will be full retail or a convention exclusive.

– Mattel is jumping into the horror fray with WWE Zombies!  That’s right…your favorite WWE superstar will now be fully undead and ready for action.  There are some pretty wonderful sculpts in this line, particularly of The Undertaker, HHH and Paige (who barely needed any added effects!).

– Mezco is starting out on their own line of Universal Monsters statues/figures, having secured the rights to produce the Frankenstein monster.  Two variants of the horror icon will be hitting the shelves shortly.  An impressive new series of the ever-popular Living Dead Dolls will be debuting this year as well, with familiar faces like Chucky, Pinhead and Sam from Trick R Treat getting the LDD treatment.

AFC has posted pictures and videos of each of these, along with all of the highlights from McFarlane Toys, Funko, and all other toy company heavyweights as well.  Check them out.