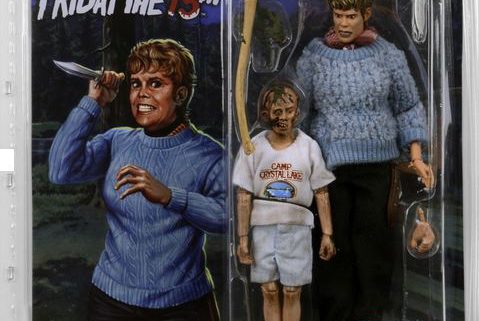 Welcome to another ghoulish installment of Horror Hunting!  In this episode we’ll feature two cool collectables, one which is yet to be on sale and one which has been floating around the retail universe for 40 years.  With the all-important and grandiose spectacle known as San Diego Comic Con 2015 just a week away, it’s important that we collectors have our priorities straight.  Vintage and exclusive pieces are the most important in the business, and we have a couple of toys here that are sure to please.  And away we go…..

This is an action figure set that is gathering a lot of buzz in the horror community (just ask CT HorrorFest 2014 celebrity and “First Jason” Ari Lehman!).  2015 marks the 35th anniversary of the release of the original Friday the 13th film, and to celebrate the folks over at NECA have created a SDCC exclusive set of Pamela and a young Jason Voorhees, complete with cloth clothing.  But they’re taking an original (and controversial) stance with this “convention exclusive”….they’re making a limited number available at random Toys R Us outlets and on the NECA toys website for those unlucky enough not to be in southern California next weekend.  This tactic, although it benefits all collectors, has created quite a stir in the action figure market because some see it as making exclusive pieces somehow “non-exclusive.”  However you view it, NECA’s visionary marketing is everyone’s gain so take advantage while you can.  Starting on July 9th, make frequent visits to your local TRU locations and hit up the NECA website and continually hit the refresh button.  One of these very cool Pamela/Jason figure sets could be yours for just $50.

This skeleton bank is a just a cool piece of horror nostalgia, especially if you can trace your glory days back to the plaid and disco era.  The bonus here is that it comes in its original box, which is always a huge deal for older horror toys.  You may have even had this bank as a kid!  There’s something awesome about a skeleton reaching out to steal your money….it just screams “HORROR!”.  Unless you’re into that type of think of course.  Either way, this slice of ghoulish Americana can be yours for just $40 (free shipping).