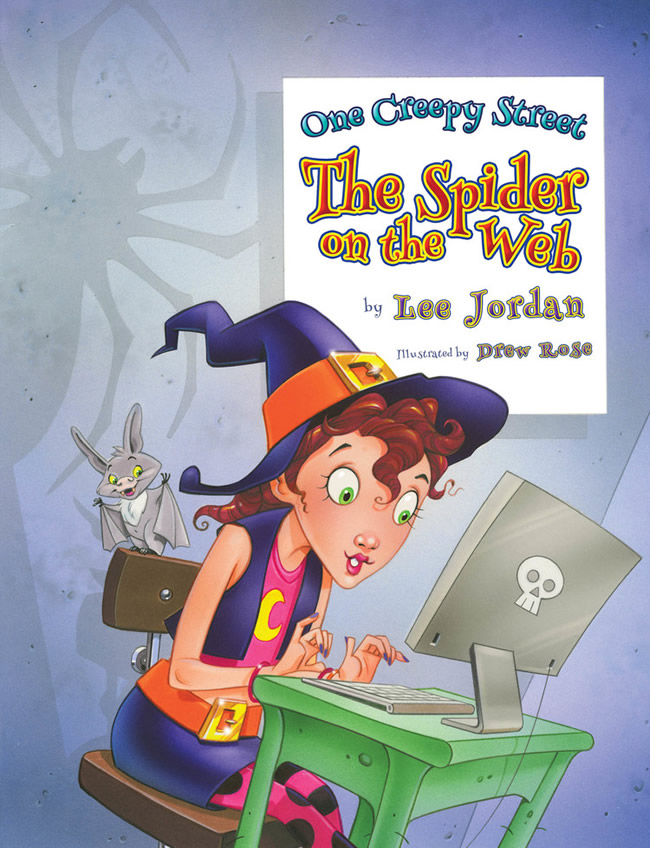 Horror Children Books that Educate and Scare: 2 Tales that Bridge Horror and Kids

As an educator, as well as a horror journalist, I am always looking for filmmakers, authors and artists who can create viable material to help educate children of different ages as well as introduce horror that keeps these younger fans a part of the dysfunctional family. In two completely different states (Texas and Connecticut) at two very different horror conventions (Texas Frightmare Weekend and CT Horrorfest) and discussing two different topics of child safety, I came upon just that! I came upon it in the storybooks “One Creepy Street: The Spider on the Web” by Lee Jordan and “Spooky Train” by Dan Loubier and Brian J. Orlowski.

If you think about it, it takes a lot to create and promote to the masses an effective storybook. Not that dissimilar to the ocean of horror media content both digital and in the flesh, the market for storybooks is vast and endless with new ones that pop up on shelves regularly. A different road for these authors has been the horror conventions and expos where authors like Jordan and Loubier along with others are bringing their variety of age appropriate reading works face to face with the crowds, fans and families that they can connect to, put a face with the writings and give a chance to show a friendlier face to horror.

Covering two different sets of ages (young children and pre-teen), both books tackle a variety of different issues that affect both genders and those around them. Both of these story books draw influence with children of different ages. The first book entitled, “One Creepy Street: The Spider on the Web” is a story about a 13 year old witch named Annica. Annica is your typical teen witch who is going beyond the normal surfing of the net and enters the more infamous side of digital searches with the “Dark Net” where she meets a deceptive spider. As Annica builds what she thinks is a friendship, she is exposed to shady characters on different chat platforms, sharing with those she does not know and drawing characters who are trying to get close to her. Sounds creepy and realistic right? Sounds like something we hear and see every day on so many platforms? Well, Jordan has taken this life lesson and teamed with illustrator Drew Rose to craft character illustrations and larger than life figures that have a fresh and mature tone in the dialogue, colors, and structure that connects an emotional element to the powerful message and moral. Featuring classic horror movie monsters, Jordan and Rose brings a cast of monstrous characters throughout the story including the giant spider who is manipulating his next prey, ghouls, and a Frankenstein police officer on the case looking for that spider. Jordan crafts a story that why serious in tone, connects to any age and creates an understanding and results from behaviors like this.

In contrast, for a much younger generation of children, two very different authors got together for the fun and adventurous story of a Halloween night and a monstrous ride in “Spooky Train”. Daniel Loubier and Brian Orlowski have collaborated together previously on more adult works of horror fiction. Finding out they would be working together on this book of learning, acceptance and friendship really intrigued me to see how they could craft such a story. I was not disappointed at all and the books was very easy and fun!

Taking a very innocent and softer approach to these morals and learning lessons during a time where the kids don’t recognize the idea of discrimination in appearance and fear towards things that they don’t understand, the lead character Bailey is very even and open to all showing a care and element of wonder towards all around him. Loubier and Orlowski tell a very important story in very simple dialogue and illustration create a portraits of loving youth and the untouched spirit of a child while on to the journey to a Halloween party.

Unlike “One Creepy Street: The Spider on the Web” which has a serious and direct tone of the dangers that may wait, “Spooky Train” has that moral but is lighter and reminds you of the days of trick or treating with your friends and monsters alike when all you cared about was candy and being friends with your fellow costumed monsters. That by no means is taking away anything “One Creepy Street: The Spider on the Web” which reaches a better age range, crafts a better construction of dialogue and a visual feel. With that aside, both are vital books to read to anybody no matter the age or development. Of course, share with ones you love or with a large group/class and definitely enjoy while promoting conversational learning and dialouge. With monsters like Frankenstein, Dracula, ghouls, spiders and adolescences (well most) which are revisited and/or introduced in these stories, much respect to the authors for being fearless and smart in showing that children and parents can both be teachers.

“Author Mike Ink” (AuthorMikeInk.com) and “Black Rose Writing” (Blackrosewriting.com) get my highest respect for allowing minds like these authors and illustrators to tell quality and educational stories that focus on classic film monsters and real horror that build bridges for generations of fans! If you have a child and you want to introduce and educate on the world of horror and all of its dark corners, pick up these two books full of color, artistic expression, morals, intelligence and tales that show us that growing up can be a risky adventure but also something to love and be safe on that journey. Pick up these two storybooks on Amazon.com, on the book publisher’s websites above or just go out and meet the publishers, authors and illustrators at your next horror show like the CT HorrorFest in August!