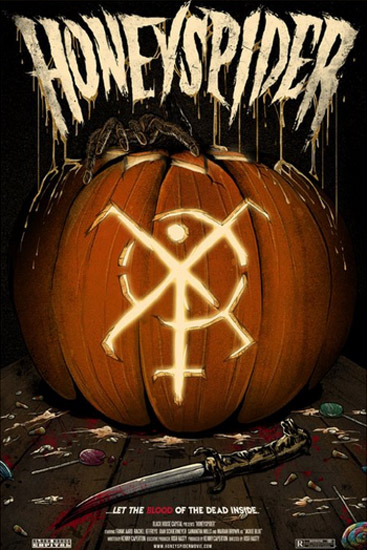 Synopsis: It’s Halloween day in 1989 and college student Jackie Blue wants to enjoy a quiet birthday in the midst of a chaotic semester at school. Her friend Amber has other ideas and persuades Jackie to come to the annual Monster Mash party on campus after her shift at the local movie theater. As murder plays out on the silver screen during the theater’s Halloween night Horrorthon, Jackie falls under a strange spell, all while a mysterious stranger watches over her every move. As the night unfolds, Jackie slowly unravels and everyone around her is turning up dead. Jackie finds herself helplessly trapped like prey in a spider’s web, and all she can do is try to survive the night!

Our Thoughts: I’m always excited for Halloween horror films and ‘Honeyspider’ is one of the best new ones to come around in awhile. The first thing that struck me about the film was the soundtrack. And not just the known songs, but the overall backing music and intro song. For a very small film, the soundtrack was effectively creepy.

Jackie is trying to have a quiet Halloween birthday, but her night takes a terrifying turn when she sees a mysterious symbol on the wall in her dorm shower, she receives a strange ring and huge spiders start appearing out of nowhere. Murder on the big screen during the horrorthon blends with real life slashing adds up to a lot of bloody mayhem and dead spiders.

The style in which the film is shot creates an incredibly effective eerie and surreal atmosphere. Combining that with the music, and ‘Honeyspider’ is one of the creepiest movies I’ve seen in the past year. Reminiscent of horror classics such as ‘Halloween’,  and ‘Rosemary’s Baby’, and Stanley Kubrick in terms of atmosphere, the film also reminded me of Ti West’s ‘House of the Devil’, which is a favorite of mine. I especially enjoyed the end of the film, which was executed in an artistic way. The Smashing Pumpkins song ‘Honeyspider,’ which the film was inspired by, plays over the last scene and wrapped up the film perfectly.

Mariah Brown was excellent as the confused Jackie Blue. Frank Aard (‘April Fool’s Day’ remake) was straight up creepy as hell. Director Josh Hasty was clearly inspired by his passion for the genre and did an amazing job with this film. I really hope to see more of his work in the future. Horror fans looking for that classic horror vibe that many of today’s films have lost need to check out ‘Honeyspider.’ It’s one of those films you will want to watch every year on Halloween.