Synopsis: HOLIDAYS is an anthology feature film that puts a uniquely dark and original spin on some of the most iconic and beloved holidays of all time. The film challenges our folklore, traditions and assumptions, making HOLIDAYS a celebration of the horror on those same special days’ year after year. A collaboration of some of Hollywood’s most distinct voices, the directors include Kevin Smith (Tusk), Gary Shore (Dracula Untold), Scott Stewart (Dark Skies), Kevin Kolsch and Dennis Widmyer (Starry Eyes), Sarah Adina Smith (The Midnight Swim), Nicholas McCarthy (The Pact), Adam Egypt Mortimer (Some Kind of Hate), and Anthony Scott Burns (Darknet).

Our Thoughts: Holidays is a disturbing collection of stories centered around eight of the major American Holidays. From good old ax-murder to epic revenge tales, to sci-fi and fantasy themes, this collection has more to offer than your run-of-the-mill horror anthologies. Each tale is separated by a book chapter pages, with no tie into any of the other stories, other than the holiday theme itself. There are also more tales featured than most anthology collections, which usually only have about five.

The stories are often on the strange and terrifying side. There are fairly graphic depictions that can be hard to watch at times. The story about the girls working in the sex business who take horrifying revenge on their boss was particularly unsettling. The use of effects, practical and otherwise, was very well done, and over all the stories had a very real and gritty feel to them.

There are also some rather unique stories about holiday origins. The St.Patrick’s day tale plays off of the whole “snakes being driven out of Ireland” mythology of St. Patrick, and reminded me of The Wicker Man. Although, clearly inspired by the classic film, the tale doesn’t come close to touching it. However, I thought the inventiveness of building a new story around the snakes reference was a highlight of the anthology series.

Sometimes on the humorous side, my personal favorite was the entertaining “New Years Eve.” It fell more to the side of dark satire, with a twisted, bloody story that was the perfect end to the series of holiday stories.

As acting goes, Lorenza Izzo was at the top of her game in “New Years Eve.” Seth Green is a pleasant addition to the cast, and perfect as the desperate gift-seeking father in “Christmas”.

For those that love holiday horror like myself, Holidays is something you won’t want to miss. There are a range of directors used for the stories, and a variety of genres featured, so chances are more horror fans would enjoy a few of the tales. 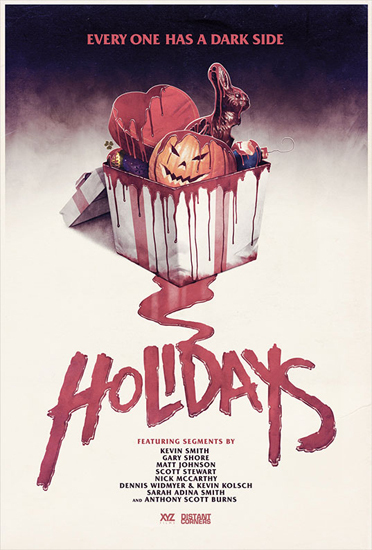