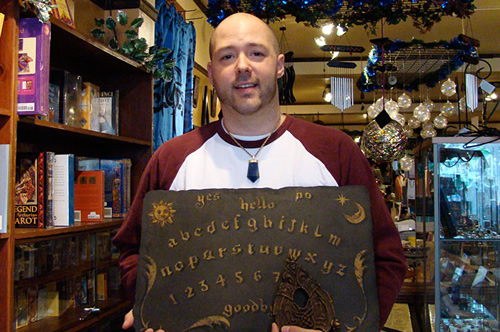 Robert Murch is the world’s foremost collector, historian, and expert on Ouija and talking boards. He’s traveled the world to uncover the truth behind the Mystifying Oracle. Murch often collaborated with Hasbro, Winning Moves, USAopoly, TCG, and ToyCo (producers of the Ouija board today) and on various films including Ouija, Inherent Vice, What Lies Beneath, Sugar & Spice and Drive-Thru. He also consulted on or appeared in numerous TV programs featuring Ouija, including 30 Odd Minuts, TNT’s Rizzoli & Isles, A&E’s Storage Wars, Paranormal State, Travel Channel’s Mysteries and the Museum and Ghost Adventures.

HNN Staff Member, Lynn Sorel caught up with the man himself and talked to him about all this Ouija.

Horror News Network: Can you tell our readers how you became involved with Ouija boards?

Robert Murch: Well, I was born and raised as an orthodox Jew and in any orthodox religion the supernatural is real and part of your life so I was raised being pretty comfortable with the otherworldly. My grandmother was awesome and she loved horror movies and Creature Double Feature films, and let me watch everything my mom didn’t want me to. Then in 1986, I had my AHA moment.  I saw Kevin Tenney’s Witchboard and I was bitten by the Ouija bug. I started collecting in 1992 when I went to the University of New Hampshire.  I had three roommates and they wanted to join a fraternity. I knew if I did that then I wouldn’t graduate LOL. For their rushing they each needed to find an old Ouija board. I grew up antique and flea marketing with my dad so I knew they were easy to find and I picked up everyone I saw. When I left UNH I had 10 different boards. I thought hmmm, how can that be? There’s only one Ouija board, right? This is before the internet really took off so I had to physically go to the college library. I looked up Ouija and every encyclopedia said it came from someplace else place. I was amazed. How could something everyone recognizes, and knows what to do with it without reading directions have its history so clouded? That mystery set into motion my over 20-year obsession with solving that very question.

Horror News Network: Just how many Ouija boards are in your collection?

Robert Murch: I have over 500 different boards in my collection, but that doesn’t include subtle differences or duplicates. All and all you’re talking thousands. If that sounds crazy then think about this. I don’t just collect the boards. I collect everything Ouija and talking board related. Music, TV, films, plays, articles, magazines you name it. All these things help me paint the picture of Ouija through the ages.

Horror News Network: Which is your favorite?

Robert Murch: My favorite board is always the next one I find. They’re like my kids and I love them equally. But, my favorites are the oldest talking boards and the ones from the originators of Ouija. Ones like the Espirito, Volo, Igili, Nirvana, and Weird- A. Ever hear of them? I’m not surprised. They never had the success of Ouija.

Horror News Network: How did you get involved with the horror film, ‘Ouija’?

Robert Murch: In 2009 I came home late from a party. I wasn’t ready to hit the sac so I flipped on the TV and surfed over to MTV. Hasbro’s CEO Brian Goldner was doing an interview explaining how Ouija was such an untapped brand and how he could see a movie in its future. I knew I wanted to be part of that somehow. So, I emailed him and he put me in touch with Bennett Schneir, at the time head of Hasbro Entertainment and now one of the producers of the movie. The project was green lighted then scrapped a few times and had a few scripts and directors attached to it. I basically gave Bennett Ouija’s history and how it’s evolved in pop culture. I gave him the myths and urban legends that we call Ouijastitions and all the things people believe today because belief is key when dealing with Ouija. What one believes is a huge part to what’s emerges from the door that Ouija opens.

Horror News Network: Has there ever been a case of people using Ouija boards that has gone anywhere near the level it does in the new ‘Ouija’ film?

Robert Murch: The people who’ve claimed to have similar experiences as in the movie believe they’re true, they believe what they’ve seen, and felt, and heard. Lots of people have claimed all kinds of things happen when playing Ouija but few end up more than they’re story or can be proved one way or the other because it’s their perception of the experience rather than something that can be recreated and studied. And that brings up a good point. There’s a big difference between everyday Ouija use and what happens when it’s played in the movies. The average Joe or Jill asks questions like “Does so and so like me?, Should I ask them out?, or even are there any spirits here?” In over 125 years of Ouija use, news agencies and Hollywood go for extreme cases. Reporting or making a movie about the Ouija board helping to find your lost ring just isn’t that exciting. But, the headline “The Ouija board told me to kill my Daddy, so I did!” rings perfect for a Lifetime original.

Horror News Network: As someone who is an expert on Oujia, what would you have done if you were main character Laine Morris in the film? Would you have sought out to contact your dead friend with a Ouija board you found in her house? And would you still have kept trying to contact spirits when you realized it wasn’t her?

Robert Murch: Hell yes! I absolutely would use a Ouija board I found to contact a dead friend and probably would continue the conversation even after I realized it wasn’t them. I think most of would if we’re being honest, because the idea that you can actually make contact with something other than ourselves is incredibly powerful. Most of us want to believe it can work even if we don’t think it can. Belief plays a major role when we’re talking Ouija boards. Sometimes talking to a stranger can be way more interesting than talking to a friend.

Horror News Network: Do you think horror films like ‘Ouija’ lead people to do genuine research on the topic, or scare them away from them? And do you think Ouija board use in film is ultimately good for Ouija’s livelihood?

Robert Murch: I REALLY like the movie because it explores a number of Ouijastitions or urban legends that have grown up alongside the board. Things like never play the board alone, always say goodbye, and never play in a graveyard, etc. These are things almost everyone’s heard or can find on the internet with a few clicks of their keyboard. My biggest fear for Ouija has always been that it doesn’t connect to the next generation. In a world full of click here and swipe that, would people growing up today be able to connect with a board game? We are a visual world so a movie is the perfect way to explore the mystery of Ouija, even if in a fantastic way. With ticket sales approaching 100 million dollars world wide, and Google predicting Ouija boards would be a best seller this past Christmas, I’d say the movie accomplished that goal. Because of the movie, an entire generation has been brought to the board and that ensures Ouija’s popularity in our digital age.

Horror News Network: What was the scariest experience you’ve had personally with a Ouija board? Would a bad experience ever turn you off using them in the future?

Robert Murch: I don’t think any experience would ever turn me off from Ouija, and I guess it depends on what you consider a bad experience. Some people tell me “OMG I just played Ouija and it told me when and how I was going to die. It was horrible!” So I ask what were they asking Ouija when it told them these things. They answer “Well…we asked when and how we were going to die…” So there’s that. My mother always told me never to ask questions I didn’t want answers to so I stick to asking positive things like “What will the lottery numbers be this week?” Sadly, Ouija hasn’t coughed them up yet! I’ve played thousands of time and have yet to have any experience that makes me sure of anything, but I’ve had enough experiences to keep me playing. I WANT to believe you can make contact with the dearly departed or something other than my subconscious and I guess that’s why everyone plays. That the possibility exists that for $19.99 you get an unlimited calling plan to the other side, no roaming, no overages and that’s a pretty compelling reason to try.

Horror News Network: Where can our readers find out more about you?

Robert Murch: The Talking Board Historical Society and I are hosting OUIJACON, which takes place April 23-25, 2015 in Baltimore Maryland. OUIJACON will celebrate Ouija’s 125th anniversary in the place it was named and bring together talking board collectors, historians, paranormal experts, fans, and enthusiasts for a first-of-its-kind event that will feature talks, panel discussions, vendors, and an exhibit displaying some of the rarest and most valuable talking boards on the planet. Whether Ouija boards fascinate or scare the hell out of you, you don’t want to miss this historic event! For tickets and more information head on over to http://www.tbhs.org/events/ouijacon-2015/

Horror News Network: Thanks for giving us some of your time, Robert!