Hellraiser Series Coming to HBO and new movie in the works

While the Hellraiser film franchise began  more than thirty years ago, they are still near and dear to the heart of horror fans everywhere; Pinhead and his group of nasty Cenobites have captured the imaginations of lovers of the macabre for decades and that love doesn’t seem to be fading away. Actors of the films and Mr. Barker himself are often mobbed at conventions with fans clamoring for any news of a return to their tortuous underworld.

Thankfully, we’ve had some news on those fronts here in 2020 –  Clive Barker is returning to his Hellraiser universe in a new series/continuation based on his “Hellbound Heart” works that is heading to HBO to be directed by Halloween’s David Gordon Green. In other Hellraiser news, Horror News Network was lucky enough to chat with original Cenobite Chatterer, Nicholas Vince.

The History of Hellraiser 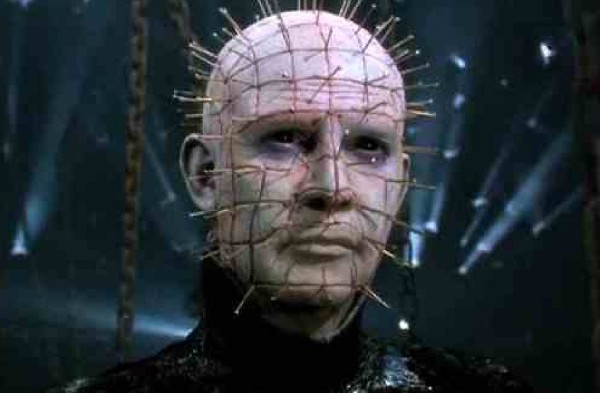 Based on a 1986 novella by Clive Barker titled “The Hellbound Heart”, Hellraiser was released in 1987 and was written and directed by Clive Barker. Minor differences from the novella are the name of Frank’s brother changing from Rory to Larry and Kirsty changing from a co-worker to Larry’s daughter. Another change is the puzzle box: in the novella it was referred to as the Lemarchand Configuration whereas in the film, it is called the Lament Configuration; the Lemarchand/Lament Configuration is used to summon the Cenobites. The Cenobites are a group of four hellish looking characters that live in another realm and can only enter our world through use of the box by someone seeking to experience more pleasure and pain than they’d ever dreamed. One who is perhaps bored with the mundane ways of run-of-the-mill sadomasochism, would use the box to open a portal which would summon the Cenobites – self described in the film by the Lead Cenobite as “explorers in the further regions of experience. Demons to some. Angels to others.”

That “Lead Cenobite”, as he was credited in the first Hellraiser film, was played by longtime Clive Barker friend Doug Bradley. The role of “Lead Cenobite”, originally titled “the Priest” in early drafts, eventually became crowned “Pinhead” due to the FX folks on set who had to spend countless hours getting the nails to show properly on camera. In the novels, he is sometimes called “the Hell Priest”, “the Cold Man” and “the Pontifex”. Other cast members are Sean Chapman as Frank Cotton, Andrew Robinson as Larry Cotton, Ashley Laurence as Kirsty Cotton, Clare Higgins as Julia Cotton, and the other three Cenobites are Nicholas Vince as Chattering Cenobite, Simon Bamford as Butterball Cenobite and Grace Kirby as Female Cenobite.

Although the MPAA made Clive Barker cut far more gore and erotica out of the film than he would have liked, he was very happy with his first experience directing a film. One odd bit was that after filming was complete, studio New World made them change the story location from England to the United States which led to overdubbing the British accents of the actors. The success of the film (14 million on a budget of 1 million) led to New World greenlighting a sequel.

Hellraiser Sequels
Hellbound: Hellraiser II (1987): A direct sequel to Hellraiser which opens with a flashback to a military officer named Elliot Spencer opening the Lament Configuration and becoming Pinhead. Then we directly focus on Kirsty in a mental hospital after the events of the first film. Hellbound brings back Doug Bradley as Elliot Spencer/Pinhead as well as Ashley Laurence as Kirsty Cotton, Sean Chapman as Frank Cotton and Clare Higgins as Julia Cotton. Along with Bradley, the Cenobites are Nicholas Vince as Chattering Cenobite, Simon Bamford as Butterball Cenobite and Barbie Wilde replaced Grace Kirby as Female Cenobite. New to the cast are Kenneth Cranham as Dr. Phillip Channard, Imogen Boorman as Tiffany and William Hope as Kyle MacRae. Tony Randel directed on a script by Peter Atkins while Clive Barker executive produced. 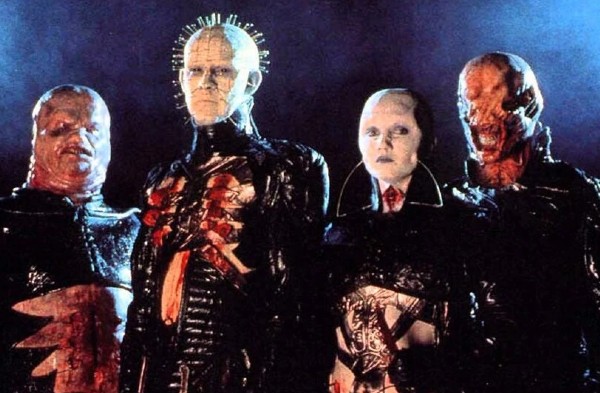 Hellraiser III: Hell on Earth (1992): Hell on Earth picks up a few years later where Pinhead is now trapped inside of the Pillar of Souls which has been purchased by a sleazy club owner. Directed by Anthony Hickox on a story by Tony Randel and Peter Atkins, Hellraiser III brings back Doug Bradley as Elliot Spencer/Pinhead with an all new cast of characters, and Cenobites. Kevin Bernhardt as J. P. Monroe / Pistonhead Cenobite, Paula Marshall as Terri / Dreamer Cenobite / Skinless Sandy, Terry Farrell as Joanne ‘’Joey’’ Summerskill, Ken Carpenter as Daniel “Doc” Fisher / Camerahead Cenobite, Brent Bolthouse as “The DJ” Cenobite, Eric Willhelm as CD Cenobite and Clayton Hill as The Priest. Metal band Armored Saint played their song ‘Hanging Judge’ in the bar scene and there was also a cameo by NY Yankee Danny Tartabull. Motorhead had a bit of a hit with the song ‘Hellraiser’.

Hellraiser: Bloodline (1996): The last of the Hellraiser franchise to have a theatrical release, Bloodline takes place partly in space and dips back into the novella to include the LeMarchand character. Again, we feature a new cast with the exception of Doug Bradley as Pinhead and a small roll for original ‘Chatterer Cenobite’ Nicholas Vince as the Siamese Twins. Joining the cast for Bloodline are Bruce Ramsay in a multi-role as Philippe Lemarchand / John Merchant / Doctor Paul Merchant, Valentina Vargas as Angelique, Kim Myers as Bobbi Merchant, Christine Harnos as Rimmer, Adam Scott as Jacques, Charlotte Chatton as Genevieve Lemarchand, Mickey Cottrell as Duc de L’Isle and Jody St. Michael as Chatterer Beast. Bloodline was directed by SFX great Kevin Yagher.

Hellraiser: Inferno (2000): The first of the direct-to-video Hellraisers, Inferno follows a corrupt police officer who finds, and solves, the puzzlebox. Stars Doug Bradley as Pinhead alongside Craig Sheffer as Detective Joseph Thorne, James Remar as Dr. Paul Gregory, Nicholas Turturro as Detective Tony Nenonen, Nicholas Sadler as Bernie, Sasha Barrese as Daphne Sharp and Kathryn Joosten as Mary Thorne. Clive Barker was in line to executive produced but was dropped and banned from the film after creative disagreements arose.

Hellraiser: Hellseeker (2002): The first of three Hellraiser films to be directed by Rick Bota and the final to have any involvement from creator Clive Barker. Hellseeker brings back Ashley Laurence as Kristy Cotton whose husband survives a car wreck in which he thinks that his wife died. The remainder of the cast contains Doug Bradley as Pinhead, Dean Winters as Kristy’s husband Trevor Gooden, Michael Rogers as Detective Givens, William S. Taylor as Det. Mike Lange, Rachel Hayward as Dr. Allison Dormer and Dale Wilson as Chief Surgeon Cenobite.

Hellraiser: Deader (2005): Starring Kari Wuhrer of MTV’s Remote Control fame as Amy Klein, Deader focuses on a reporter looking into a cult called “The Deaders” who appear to be murderers. Doug Bradley is back as Pinhead along with Paul Rhys as Winter LeMarchand, Simon Kunz as Charles Richmond, Georgina Rylance as Marla and Marc Warren as Joey. 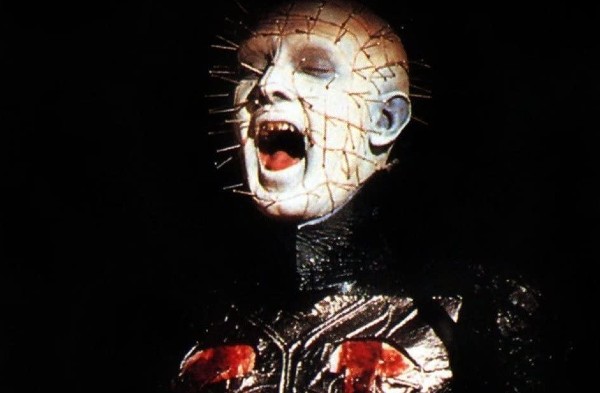 Hellraiser: Hellworld (2005): Filmed at the same time as Deader, Hellworld is the last of the Hellraiser films to feature Doug Bradley as Pinhead. As was popular in 2005, Hellworld revolves around characters who are obsessed with an online game. The venerable Lance Henriksen leads the cast as The Host. Other cast are Henry Cavill as Mike, Khary Payton as Derrick, Katheryn Winnick as Chelsea and Christopher Jacot as Jake.

Hellraiser: Judgement (2018): Written and directed by Gary J. Tunnicliffe, Judgement brings us more into the Hell of the Cenobites and adds a new division called the Stygian Inquisition. Following three detectives as the search for a serial killer who kills people who break any of the Ten Commandments, Judgement casts a new actor as Pinhead this time around in Paul T. Taylor. Also in the cast are Damon Carney as Detective Sean Carter, Randy Wayne as Detective David Carter, Alexandra Harris as Detective Christine Egerton, Gary J. Tunnicliffe as the Auditor, John Gulager as the Assessor, Mike Jay Regan as the Chatterer and Heather Langenkamp as the Landlady.

Cenobites
Central to the Hellraiser franchise are the Cenobites, or “Order of the Gash”. Once human, the Cenobites now exist only in their realm in Hell until summoned by someone solving the Lemarchand/Lament Configuration. Below is a list of Cenobites that have appeared in the films:

Thomas Tuna - November 3, 2021 0
The new Pinhead in the upcoming Hellraiser reboot went heavy on the makeup. A new video surfaced this week that shows how Jamie Clayton--the surprise replacement for Doug Bradley as Pinhead in the new Hulu Hellraiser film--took on her eerie screen persona. Check out the Instagram post--courtesy of comicbook.com--on this page.   View this post on Instagram   A...

Thomas Tuna - October 20, 2021 0
The classic Hellraiser property is being resurrected under two different umbrellas, and while the film version recently wrapped, the TV series...not so much. The David Bruckner-led Hellraiser feature--slated for a Hulu release--has completed shooting, but the HBO Max TV adaptation is still under development, according to a report on Entertainment Weekly, and is inching...

Thomas Tuna - October 7, 2021 0
It's official--the upcoming reboot of Clive Barker's 1987 Hellraiser will be different. First and foremost, Spyglass Media Group this week announced that Jamie Clayton (Sense8) will take on the pivotal role of Pinhead in the new film--a part originally played by Doug Bradley. It also was confirmed, according to a report...

Rob Caprilozzi - September 7, 2021 0
It was only a matter of time before The Hell Priest arrived in the Fog. Today, Behaviour Interactive launched the highly anticipated Hellraiser chapter in Dead by Daylight. "Pinhead has one of the most recognizable faces of all the horror classics. Even people who have never seen the movies know that...

Thomas Tuna - August 11, 2021 0
Very little is known about the upcoming remake of 1987's classic Hellraiser--and director David Bruckner only helped matters a little this week. The reboot from Spyglass Media--the 11th installment in the franchise--looks to have little to do with the sequels, as reported by gamesradar.com, and will draw its inspiration from the original...

Thomas Tuna - May 24, 2021 0
The long-awaited Hellraiser reboot has found a home--Hulu reportedly will stream the update on the classic chiller. The remake--from director David Bruckner (The Night House) and screenwriters Ben Collins and Luke Piotrowski--will go straight to the streamer, as reported by wegotthiscovered.com, as opposed to hitting the Silver Screen. Very little else is known about the new...

Thomas Tuna - December 2, 2020 0
The judge has ruled, the gavel has struck and Clive Barker has won. Barker this week regained the U.S. rights to his landmark 1987 Hellraiser film, setting up the filmmaker to control the destiny of the franchise, according to The Hollywood Reporter. This court decision--which only applies to domestic, not foreign, rights--will...

Christine Caprilozzi - November 20, 2020 0
Horror fans know Nicholas Vince from Clive Barker's classic, Hellraiser, where Vince played Chatterer, and from Nightbreed where he portrayed Kinski. Although he’s known for playing one of the sadistic Cenobites, Vince is also known for getting chatty in a good-natured way by taking on the interviewer’s role.  His...

Larry Dwyer - October 31, 2020 0
The man behind Hellraiser, Nightbreed, Candyman and more is joining forces with HBO to executive produce a series adaptation of his classic Hellraiser for the network. Perfect news for the spooky season, Deadline announced the deal with Clive Barker yesterday. The series promises to be a continuation (not a remake)...

Mark McCurley - October 18, 2020 0
Like Pinhead to a human soul, horror mastermind Clive Barker is tearing the internet apart with updates on projects of his that are in the works. Namely a new novel, titled Deep Hill, and a television series adaptation of his Marvel comic character Ectokid. While doing an "Ask Me Anything"...
Load more