Gary Gianni is an artist who has worked with numerous writers who are near and dear to fans around the world such as Harlan Ellison, Ray Bradbury, George R.R. Martin, Michael Chabon, and Hellboy creator Mike Mignola.  The fact that Gianni continues to collaborate with such prominent writers  is a true testament to his artistic talent and unique style of illustration.  Horror News Network was lucky enough to speak Gianni about his upcoming Hellboy graphic novel Into the Silent Sea (which will be released on April 19th), as well as his career and upcoming projects.

Horror News Network: Thank you for joining us today.  I understand that before you started your art career you worked as a court room sketch artist in Chicago.  How did this job help you as an artist?

Gary Gianni: Well, I was in art school at the time and it was a good opportunity to practice my craft in a unique environment.  In that era, cameras were the size of a stove, so the press used a lot of court room illustrations in their coverage of prominent cases.  It taught me how to work quickly and include a sense of animation in my art.  It was certainly a great training ground and a lesson in humanity, and the depths some people will sink to.  In 1980, I covered the John Wayne Gacy trial for three months, which was a true “horror story” and one that was certainly a traumatic experience for me to listen to every day.

HNN: A lot of your work has focused on classic pulp heroes such as The Shadow, Solomon Kane, Conan the Barbarian, etc.  What draws you to work on these type of heroes and novels?

Gianni: I enjoy everything about that time period; the atmosphere, mood, tone, and is one that I like to draw.  In terms of my sensibilities, that era is a natural fit for me.  I always loved Robert E. Howard’s characters and the The Shadow.  I also love the movies of the pulp era.

HNN: You recently illustrated George R.R. Martin’s prequel to his Game of Thrones series entitled Knights of the Seven Kingdoms.  How did you end up working on this high profile project?

Gianni: I knew George and, in the 1990’s, I illustrated a Solomon Kane collection (The Savage Tales of Solomon Kane) and he said that he always wanted to publish a book that looked like that one.  I ended up working on a calendar for George and I jokingly asked him “Why don’t you write something for me to illustrate?”  The next thing I knew, he asked me to illustrate the prequel to Game of Thrones.  They asked for 40 illustrations, but I ended up doing 160.  I remember asking George (possibly shooting myself in the foot): “You go to great lengths to describe these scenes in your novels and the reader can picture these scenes in their mind’s eyes; why would you want an illustrator adapting them?”  He said that he enjoyed seeing his work interpreted by artists, which certainly shows a great amount of trust on his part.

HNN: You also worked with Pulitzer Prize winning author Michael Chabon on Gentlemen of the Road.  What was that experience like?

Gianni: I enjoy working with living authors because I can ask them questions.  Some authors, like Lovecraft, are famous for not describing key scenes or characters and they put illustrators in a tough position.  I think the author’s intent is important in terms of artwork.  I want to capture what the author had in mind.  When I was illustrating Gentlemen of the Road, I kept imagining one of the characters (Hanukkah) as a classic actor named Akim Tamiroff (Touch of Evil).  When I asked Michael, what he thought Hanukkah looked like, he said “kind of like Akim Tamiroff”  so we were pretty much on the same page there!

HNN: Speaking of your latest work with Mike Mignola, what was the genesis of Into the Silent Sea? 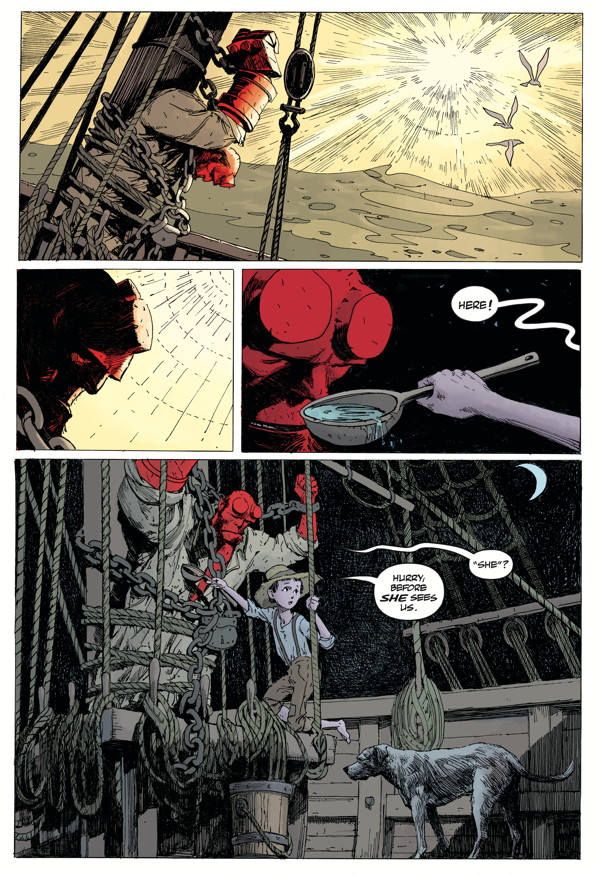 Gianni: Mignola and I have very similar tastes, temperaments, and senses of humor.  I first started doing a back-up feature in Hellboy called MonsterMen and after that he told me that he had a “lost at sea” story-line bookmarked for me, particularly since he didn’t want to draw all of the rigging that it required!

Eventually, Mike came back to the story and I started doing research on these 19th century ships as the story takes place almost exclusively on a classic phantom ship ala “The Flying Dutchman”.  It’s important for the reader to understand spatially where everything is happening on the ship during the story.  I located a model ship builder’s club in my area and showed up at one of their meetings.  They were shocked that anyone who wasn’t a model builder would come to one.  I explained to them why I was there and they were very helpful, particularly one builder who allowed me to photograph a six foot model ship for my research purposes for the story.  It ended up being a big help in terms of a frame of reference.

One piece that I didn’t use on the ship were the sails.  Sails cover up so much of the ship that I decided I didn’t want them in the way.  Hellboy quickly comments on this fact at the start of the story, so the reader can go along for the journey without them and never questions why they aren’t there the rest of the way.

HNN:  You mentioned the MonsterMen back-up feature that ran in some of the earlier Hellboy stories.  I understand that the collected edition (Gary Gianni’s MonsterMen and other Scary Stories) is being re-released by Dark Horse this summer.  Is that correct?

Gianni: Yes.  It is nice to have it available again.  Some of the material is now over 20 years old, so if fans enjoy Hellboy: Into the Silent Sea, hopefully they will also enjoy some of my earlier work.

HNN: What do you enjoy about working on Hellboy?

Gianni:  Hellboy isn’t so much straight horror as gothic storytelling.  Hellboy has a sense of whimsy and fun as well.  He also has a lot of pulp hero traits and is a lot like the “hard boiled” detectives of the era.

HNN: Examining your art, it also appears that you have a love for Universal Monsters.

Gianni: Absolutely.  I actually included a homage to The Bride of Frankenstein in Into the Silent Sea when Hellboy is chained up on the mast just as the Monster is tied up in the early stages of the film by the villagers. I also remember my father talking about Phantom of the Opera and pulling up his nose to get that Lon Chaney effect.  Famous Monsters magazine was also an influence and that is where I was able to see some great photos from those films.

HNN: Do you have any other projects that you are working on?

Gianni: I do have a collection of my Prince Valiant material that will be released in the early fall.  I worked on the Prince Valiant comic strip for eight years and produced over 450 pages of art.

HNN; Thanks for your time today and we look forward to Hellboy: Into the Silent Sea and the MonsterMen collection.