Synopsis: Emmy’s world of magic grows a lot bigger as a host of witches make her acquaintance.

Recent issues of Harrow County have greatly expanded on the supernatural world that Emmy inhabits, introducing a variety of local magicians and backwoods sorcerers.  This issue takes the biggest step so far in the series, introducing an entire “family” of magic folk with undetermined intentions for Emmy and the rest of Harrow County.  The most interesting of this group is the long haired, smooth-talker Levi who appears to be the titular head of the new group.  His introduction to Emmy and Bernice is made through the enchantment of local child Clinton and a mysterious ghost that leaves bloody footprints.

Our tale starts with a flashback to Emmy’s mother and her existential crisis regarding her baby and her own life choices.  This story line comes back at the end of Emmy’s present day story to effectively bookend her mother’s costly choice, setting up more about the mysterious gang of witches for next issue.

Bunn and Crook work their “magic” once again in this issue, setting the mundane directly next to the fantastic.  Crook’s art zooms in and out of the frame, giving the reader the long look at the intense showdown between Levi and Emmy and then focuses on the very telling eyes of the conman.  The cinematic quality will be well-served if the producers of the adaptation take their ques from what already exists on the page.

This issue ends with the popular “Greetings from Harrrow County” letter page which consists of reader’s stories about their own supernatural experiences.  This trend started in the early issues of the series and thankfully continues today.  Readers also get the one page “Tales from Harrow County” by Bunn and artists Brian Hurtt and Matt Kindt which further expand on the world of Emmy, outside of Emmy.  The art fits well with Crook’s and follows the understated style and muted color tones. 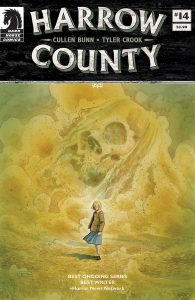