Sequels are tough to pull off in any genre, but pulling off a sequel in the horror genre is an even more difficult feat.  Most horror films were not originally intended to be franchises even though they often spiral into them (Halloween, Friday the 13th, Texas Chainsaw Massacre), and the law of diminishing returns rears its ugly head in the vast majority of these cases.

Finding a more competent sequel than the original proves even harder to locate, but in the case of Happy Death Day 2U, director and co-writer Christopher Landon has accomplished this rare achievement, albeit one that is much less heavy on slasher tropes, instead venturing into the world of science fiction and comedy.  Landon’s follow up to his surprise hit Happy Death Day is a superior film for these reasons, but it may not appeal to horror fans in the same ways that the first one did.

Happy Death Day 2U picks up exactly where the previous film left off (which is kind of the point of the first one, right?) but we see it from a different perspective this time around: that of Carter’s always-interrupting room mate Ryan.  The first film never delved into the causes of the Ground Hog Day time-loop that Jessica Rothe’s Tree was caught up in, but we quickly find out the reason why once Ryan is trapped in a similar replay.  Landon and co-writer Scott Lobdell (who any comic fan will remember from his work on numerous X-titles from the 1990s) immediately reveal to the audience that the rip in the time-stream is all due to an experiment that Ryan and his science pals have been working on, establishing the genesis of the problem. With all of modern fandom’s interest in “plot holes”, it is understandable why a cause for the events in Happy Death Day would be explained, but thankfully the explanation becomes the aspect that drives the majority of the story in the sequel, and does not dwell on why the events occurred in the first place (or first film).  Instead, the film explores the further complexities of time loops and the problems that occur when characters enter alternate realities (otherwise known as the multiverse). 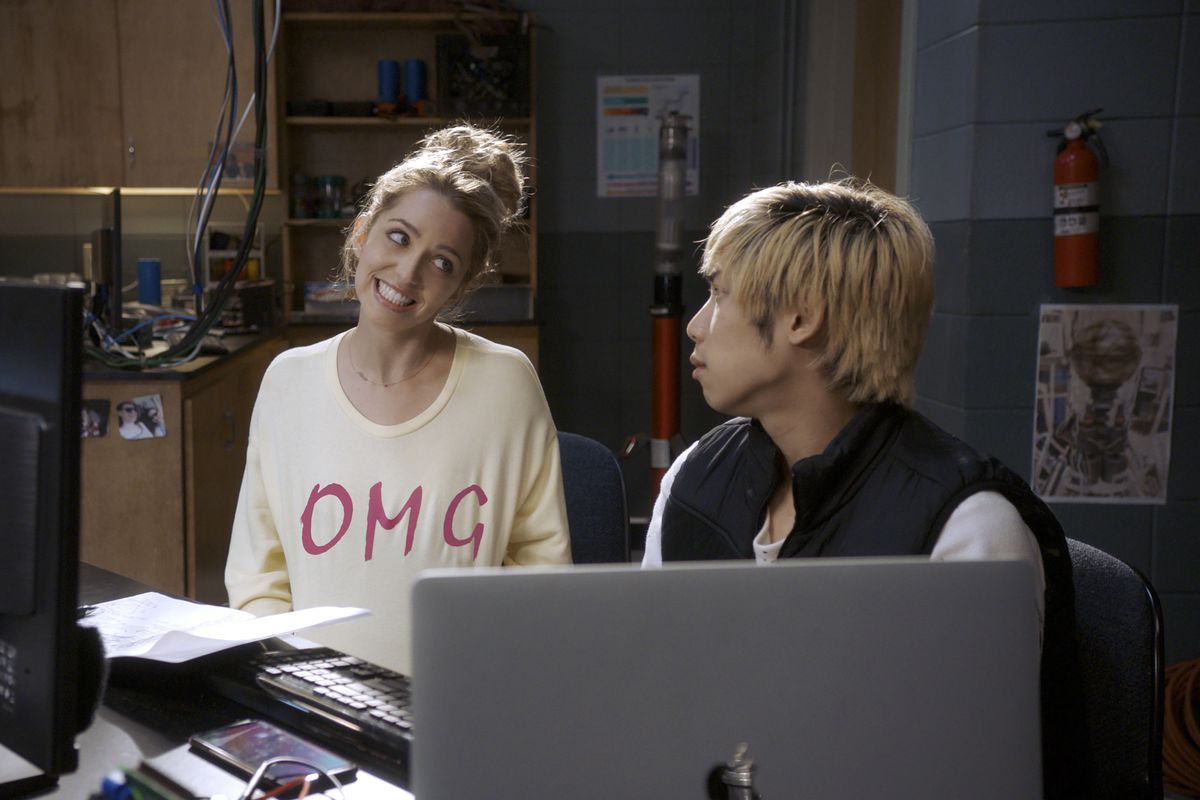 At this point (perhaps 15 minutes into the film), the ride starts and runs consistently throughout the majority of Happy Death Day 2U.  Tree is once again trapped in an endless cycle of early morning wake-ups, but in a somewhat different world than she is used to.  Just like Happy Death Day, Jessica Rothe is the stand-out star, conveying a sense of unbridled frustration, terror, heroism, and humor (sometimes simultaneously) throughout the film.  She also performs well in scenes with loved ones lost in the previous film, exhibiting an emotional range that was not displayed to this extent in Happy Death Day 2U.

Rothe is the person that fans expect to see in action in the film, but the cast is rounded out with many of the regulars from last time (such as Israel Broussard’s safe, respectful boyfriend Carter and Rachel Matthews’ nightmarish sorority sister Danielle), but Phi Vu’s Ryan Phan makes the most of his greatly increased screen time, showing off his comedic chops along with his two lab partners, Suraj Sharma’s Samar and Sarah Yarkin’s Andrea.  The ensemble works well together and allows Rothe to share some of the intrigue and jeopardy that  plagued her character throughout the first film.

Happy Death Day 2U pulls off a 1980s vibe, without trying to be a clone of 80s films or become bogged down in quick, ridiculous name-dropping (such as this past December’s Bumble Bee).  A good example of this is when Carter and Ryan make a reference to Back to the Future Two, but it is used to tell a joke, not wallow in nostalgia from an era that neither the characters (or target audience) has a high degree of familiarity with. Instead, what makes it seem like a film from the 80s is the irreverent humor (especially during Tree’s multiple suicide scenes), the focus on the complexities of young love, and the honest, witty dialogue that Landon and Lobdell penned for the script.  One slapstick comedy section near the end of the film involving Danielle and the dean of the college is a bit forced even by 80s standards (and it is actually more akin to Looney Toons style hijinks), but the vast majority of the film pulls off this sensibility successfully.

While Happy Death Day 2U is a more enjoyable, unique film than its predecessor, it may be one that fans are surprised by, especially those seeking a focus on the last film’s baby-masked killer’s antics.  The big baby certainly plays a role in this story, but the majority of the film plays more with  other genres.  Hopefully, fans looking for a good scare will also appreciate the laughs and heart ache that Happy Death Day 2U delivers, along with a likable cast, proving to be a rare sequel that improves on the foundation laid in the past.

While many predicted a better showing for Happy Death Day 2U, the film ended up in fifth place at the weekend box office with...
Read more

Prodigy is a term usually reserved for a young phenom that "can't miss" in whatever field their talents take them, such as playing the...
Read more

Escape Room entered a crowded marketplace this weekend, but Sony's PG-13 "Saw-lite" film managed to finish second with an estimated $18 million at the...
Read more

Winter can be an unpredictable season.  Some days defy expectations and reach 60 degrees or better (in the parts of the country that actually...
Read more