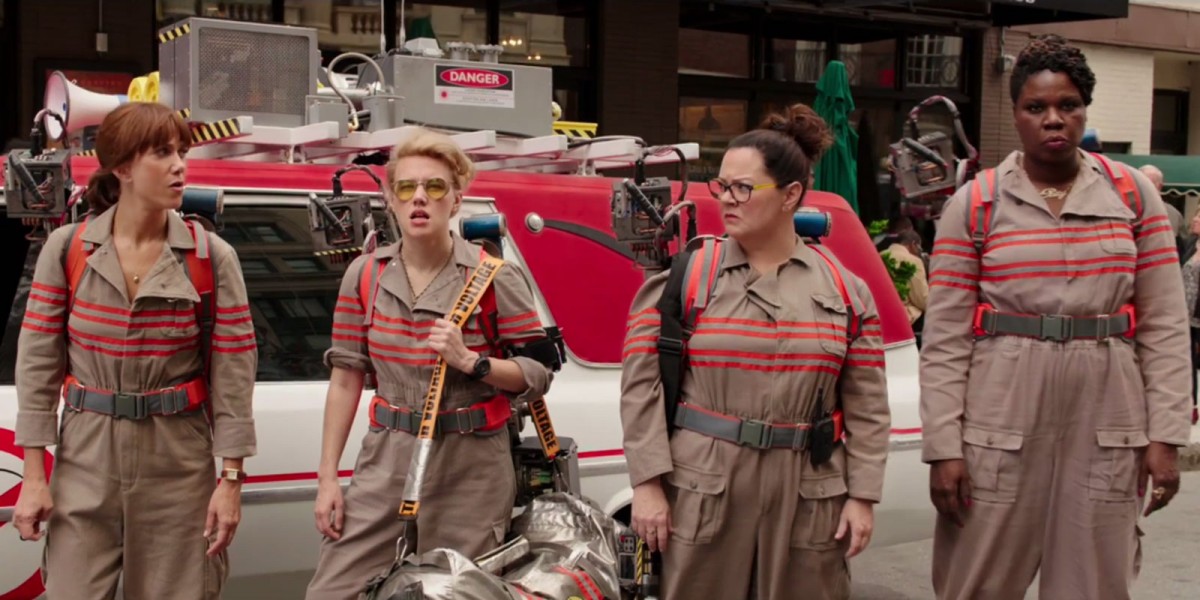 The weekend estimates for the Ghostbusters remake have been released and the new film finished second to The Secret Life of Pets with a total of $46 million at the box office from July 14th to July 17th .  This total is comprised of Thursday night, Friday, Saturday, and Sunday totals.  Many analysts predicted a second place finish to current animated juggernaut Pets, but is this a disappointment or a hopeful start for the most embattled film of the summer?

Looking closer at the box office totals, Ghostbusters debuted with 3.4 million on Thursday, which is a competitive number, comparing to other films that finished around the $50 million dollar mark for their first weekends.  One alarming stat shows that Ghostbusters was the only film in the top 35 at the box office this weekend that declined from Friday to Saturday ($17,200,000 vs. $16,350,000). Every other film at the local multiplex saw an increase in attendance on Saturday.  Sunday’s current estimates clock in at $12,450,000 which shows the film dropping in attendance across the weekend.

The fact that Ghostbusters did not perform better is surprising due to the lack of new competition this weekend.  The new film was the only major studio release.  The only other film this summer season that faced no new competition was Captain America: Civil War.  This also points to a disappointment for Sony Pictures since when this was announced, rival studios steered clear of the date, figuring Ghostbusters to be one of the major blockbusters of the summer of 2016.  This should be taken into consideration when comparing the initial expectations for what was thought to be a new franchise starting film versus the reduced expectation due to a year’s worth of fan backlash.

Although the remake faced no new competition at the box office this weekend, the film will face a slew of competitors for the same audience over the rest of the summer.  Next week sees the debuts of Star Trek Beyond, Ice Age: Collision Course, and the surprisingly well-reviewed horror film Lights Out.  While most reporters tend to brand Ghostbusters as appealing to a standard comedy audience, the reality is that the film also appeals to science fiction and horror fans due to the fantastical nature of the special effects driven supernatural tale.  In terms of box office, most science fiction, horror, and fantasy films have a huge front loaded weekend, but then succumb to rapidly declining returns.  With two strong contenders next week for the same audience, a sharp decline is also likely for Ghostbusters, with a drop in sales close to 60% for a total of roughly $20 million dollars next weekend.  With a new Jason Bourne film and the outrageous comedy Bad Moms debuting the following weekend, the film will likely see a shorter run than previously hoped for.

International box office should help the film’s bottom line, but with no release in China (The Hollywood Reporter) due to the Chinese government’s ban on supernatural elements in films, help from the second biggest movie market in the world will not resuscitate the overall box office (shockingly, Sony tried to get the film past the censors in China by renaming it the “Super Power Dare Die Team”).

At this point, it does not look like the film will jump start a new franchise. Entertainment Weekly reporter Nicole Sperling has even gone so far as to say that Ghostbusters needs to gross at least $400 million to break even (based on the estimated budget and marketing costs).  Even if that number is somewhat inflated, anything short of $350 million dollars world-wide will be a disaster for Sony Pictures.

[…] number for Sony was unofficially set at $300 million, other reporters such as Entertainment Weekly’s Nicole Sperling have gone so far as to say that Ghostbusters needs to gross at least $400 million to break even […]