Hellblazers, directed by Justin Lee, has a very interesting concept that sounds like it could be a lot of bloody fun.  Deadline describes it like this: “The story, set in the late 1980s, follows a satanic cult that has singular focus of unleashing hell on Earth. With the help of an ancient incantation, they conjure a demon, and its members are tasked with feeding it the populous of a nearby small southwestern town.”  Basically, they had me at “satanic cult”, “demon” and “1980s.”

Dern is part of an all-star horror movie cast in this one.  He is joined by big-screen veterans Courtney Gains (Children of the Corn), Adrienne Barbeau (Creepshow, The Fog), Meg Foster (They Live) and the incomparable John Kassir (voice of the The Crypt Keeper in Tales from the Crypt.)  If that’s not enough both Billy Zane (Titanic) and the Candyman himself, Tony Todd, had already been previously announced.

While not much is yet known about this film (including a release date), the fact that it’s in post-production and boasts this impressive of a cast bodes well for horror fans everywhere.

Keep tuned to HNN for more news on Hellblazers as it breaks! 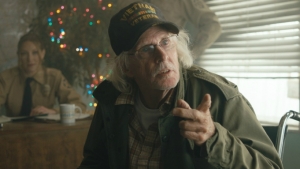 Business has been booming at the virtual Cannes market, and Brainstorm Media this week was on hand to land the U.S. rights to the...
Read more

Anticipation for Shudder’s new horror anthology series Creepshow (based on the 1982 film written by Stephen King and directed by George A. Romero) has...
Read more

Season 2 of the well-received Shudder horror series Creepshow is gaining steam as we head into the final stretch of this terror-filled year of 2020. The anthology...

Halloween fans now have a new collectible to obsess over. Further Front Publishing has announced a new book, The Legend of Halloween, based on...

The worst could be yet to come as the debut of the Songbird trailer gives us a glimpse at COVID-23. Michael Bay serves as...

Allnighter shocked comic fans today by announcing that they will be adapting the ultra-violent Image Comics series The Strange Talent of Luther Strode as a...

Remaking a classic film--horror or otherwise--is always a tricky proposition. But that hasn't stopped many filmmakers from trying. And one of the most prominent targets...