While dealing with the loss of her mother, a young woman is torn between two worlds – one of good and one of evil. As her unattached state of mind weakens, she turns to drugs and during an overdose, hallucinates to the recollection of her past. Before death, she is faced with her final judgement. For the better of mankind, she will have to make a choice. Her choice, a predetermined path to darkness.

Having never seen any of Klayton Dean’s work, I had no idea what to expect when he sent me his thirty minute short titled Feed the Black. Well…holy shit. To say that this film is a complete shock to the senses is an understatement at best. It begins with a black screen and an eerie voice-over accompanied by low, hypnotic chanting. The speaker asks you to close your eyes as he sets a somber tone. After nearly five minutes of thought-provoking suggestions, the film begins.

Being only thirty minutes, there isn’t much about the film that I want to give away other than what you’ve already read in the synopsis above. The scenery is beautifully haunting and the music is intensely ominous. Dean is able to spin a frighteningly dark and insanely frantic tale using only a few gifted actors, very little dialogue and a wicked artistic vision. Bravo, sir. 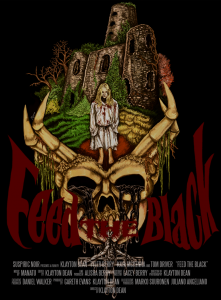 I've been hearing murmurs about I Hate the Man in My Basement for a while now. I tend to read up on film festivals...
Read more