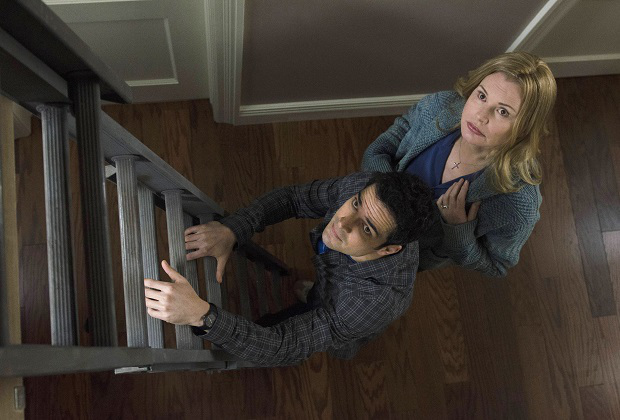 It takes a lot of guts to turn one of the most infamous horror films of all time into a network television series. Most horror fans have such vivid and sacred memories of 1973’s The Exorcist, that the producers must have known that comparisons would inevitably made between the original masterpiece and Fox’s new Friday night series. The decisions of the showrunners over which elements of the film to include in their pilot episode could help viewers determine what kind of remake/reboot/re-whatever this is going to be. While some of these decisions end up being a little too formulaic and redundant, some of the new elements added to the formula could ultimately be what might make the show interesting.

Parts of the pilot episode of Fox’s The Exorcist follow the “paint by numbers remake” philosophy seen in recent horror adaptations of classic franchises. You get scenes which take place in a wealthy section of an American city clashing with scenes which follow a White priest in a foreign, less affluent part of the world. You get twisting body parts and scary voices. You even get Tubular Bells, prophetic nightmares, an attic scene and a creepy room at the end of a hall. Some of these choices seem lazy, especially considering the fact that the “possessed child” genre has been overplayed to death in the time since the original film both created and perfected it. And in case your “Exorcist Bingo” card hasn’t been completely stamped out by now, the original stairway is featured in a research segment, tying the two stories together more vividly than necessary.

Some new additions to this storyline continue with the tradition of borrowing heavily from things we’ve seen way too many times in horror stories. The overuse of computer generated imagery has the potential to pull the viewer completely out of a scene or two. Some scenes can be used to illustrate the progression of the genre. The puppetry and acting of the 1973 original was replaced in the 2000’s by jolty, jerky computer imagery, which has now come full circle and overtaken the newest entry in The Exorcist franchise. In addition, there is an overreliance on erratic CG animal jump scenes that look too much like everything else to be able to call it The Exorcist.

Some of the pilot episode’s omissions are just as troubling as what they chose to include. The original film isn’t terrifying because of the pea soup and sacrilege. It’s terrifying because of the way that it slowly builds up a world of flawed human characters involved in damaged human relationships and practices. Regan interrupting her mother’s party subtly hints at something sinister at such a minute level that the characters and the viewer are forced to question whether  the act is just one of the typical rough patches of adolescence or something more troubling. Is the statue of Pazuzu a forgotten relic of an irrelevant myth, or the embodiment of evil beyond human understanding? The hospital scenes of film may just be the most truly terrifying scenes of the entire work. The viewer squirms as otherwise educated individuals use a sophisticated spinal tap as a blunt tool to enter the body, completely missing the actual source of the trauma: the soul.

While the show does hint at some potential for this material, pretty much all of these elements are missing from the pilot episode of The Exorcist tv series at face value. Instead, the storyline progresses at a breakneck speed (no pun intended). 20 minutes into the episode, the protagonist mother approaches the protagonist priest to alert him that she believes there is a demonic presence in her house, providing less evidence than the kind of evidence you’d need to convince an exterminator to spray your house for an ant infestation. Nothing seems to build slowly in this show, and it seems like a real missed opportunity… especially when the extended length of a television series could have provided more than enough time to explore the effects that doubt and medical and psychological intervention could have on a family suffering through a supernatural occurrence.

Despite some of these issues that could spell trouble, the tv series makes a few changes that seem promising. By connecting the “priest with questions” to the “priest with experience” very early in the storyline, the series could be setting up potential for these two characters to learn from each other and interact with each other’s strengths and weaknesses in a way that wasn’t possible in the original film. Both Alfonso Herrera and Ben Daniels are fun to watch, and they could certainly establish an interesting dynamic as Father Ortega and Father Keane as the series goes on. The pilot also hints at there being potential conflicts between the two characters, which could be dramatic as the terror begins to build in the storyline.

The size of the family has been increased for this version, and so far this seems to be a good fit for the extended storyline of this series. Geena Davis holds her own as Angela Rance, the strong-willed matriarch of a family troubled by trauma. While the father of the household is present (Alan Ruck as Henry Rance), his disability is sometimes the target of the impatience of his frustrated family. One daughter, Kat (Brianne Howey), appears to be suffering from depression following an automobile accident that took the life of her friend. Her personality seems even more out of place in contrast to the always-bubbly characteristics of her sister, Casey (Hannah Kasulka). This puts Angela in a position where she is juggling more responsibility as “the mother holding it all together” than she would had these characters not existed. The show effectively depicts a family that feels real because of its flaws. The interactions between these characters will be key to how successful this series ends up being. The show has set the stage for a wide range of complications related to a family system under extreme stress, and the individual flaws of the family members could pave the way for more interesting storylines that resemble the sophisticated struggle between the troubles of contemporary life and the inner turmoil of ancient spiritualism which can be found in the original film.

Without giving too much away, the conclusion of the episode hints at the possibility that the possessed person is someone other than who was to be expected. This move helps to break away from the mold of what viewers expect to see in a character who is struggling with demonic possession, and it could allow for a variety of conflicts that would feel new for the series and for the genre as a whole. It will be interesting to see how the show builds on this twist.

Just as bubbling sores or creepy eyeballs allude to the demonic presence lurking underneath the surface of a possessed individual, some of the unique new elements of The Exorcist tv series could be hinting at an ultimately worthwhile way to spend your Friday nights this fall. Only time will tell if this series will bring a haunting new depth to the horrors of the human mind and the dysfunctional family system, or just a bunch of more CG animal freakouts. But so far there’s enough there to stay tuned.